The disagreements about health care, and the mild protests that have sprung up across the country, are hardly an indication of an apocalyptic battle. 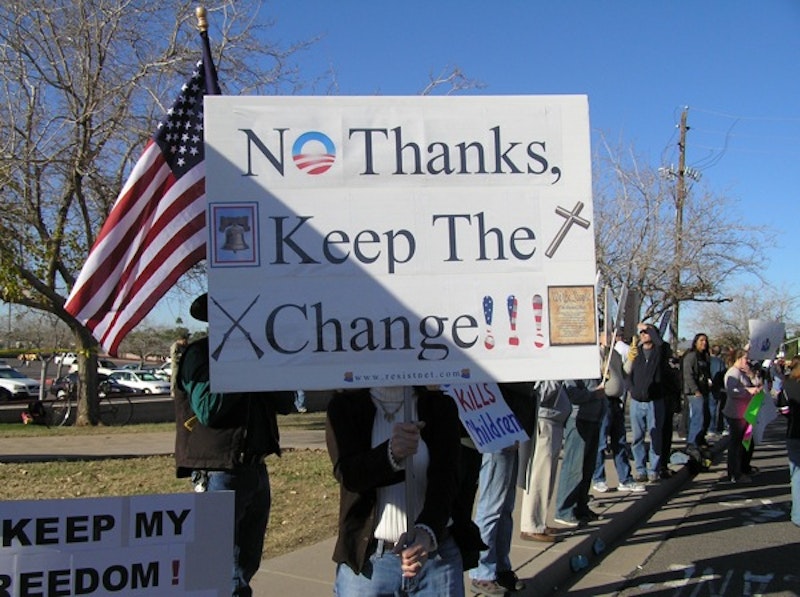 Photo from TCOT in Arizona

A neutral observer, if such a creature exists in today's political culture, would, I believe, read the liberal (or "progressive," if you will) print and online commentary about the injustices hoisted upon Barack Obama and the Democrat-controlled Congress, and wonder if the purveyors of such opinions are either still so besotted by the President's victory last November or simply having a self-administered case of amnesia.

The media's still in a state over the historically tame public protests-whether at local schools and lodges, or in Washington, D.C.-about the administration's health care proposal, the fate of which is certainly presently unknown. Hendrik Hertzberg, a fine veteran journalist who currently plies his trade at The New Yorker, is in a mad lather, writing in the Sept. 21 "Talk of the Town," about the "tea-partying, town-meeting-disrupting, pistol-packing mensis horribilis of August" that "came as a profound shock to many who voted for Barack Obama." Hertzberg goes on to praise Obama's speech last week, meant to buck up Congressional Democrats, as "his best as President." I don't agree—while Obama is without peer as an orator in this political era, his grandiloquent flourishes are getting increasingly musty—but if others believe that every address the man gives is his best, well, that doesn't ruffle my feathers.

In addition, I agree with Hertzberg that Obama ought to toss the façade of bipartisanship in the trash bin and work solely with Democrats on his initiatives. He has the numbers on his side, after all, and White House photo-ops with the likes of Sens. John McCain or Olympia Snowe may look snappy on the front pages of daily newspapers, but they don't advance his interests.

What I take issue with is Hertzberg (and he simply echoes, although in more elegant prose, innumerable like-minded pundits) consigning those who disagree with the health care plan as part of a new "fringe," one which is beholden to-surprise-Fox News and a slew of similar modern-day Westbrook Peglers. Hertzberg writes: "The protestors do not look to politicians for leadership. They look to niche figures media figures like Rush Limbaugh, Sean Hannity, Glenn Beck, Michael Savage, and their scores of clones behind local and national microphones. Because these figures have no responsibilities, they cannot disappoint." He then says that the "dominant wing of the Republican Party" is "increasingly an appendage" of this chaotic, foaming-at-the-mouth crew of entertainers.

A few thoughts. One, the protests (the "good" kind that personified freedom of speech and democracy in action) of the 1960s, especially those against the Vietnam War, were not inspired by politicians, but rather charismatic figures outside the mainstream, such as Tom Hayden, the Berrigan Brothers, David Dellinger, Mark Rudd and, for comic relief, Abbie Hoffman and Jerry Rubin. And, in truth, the fear of military conscription probably trumped any speeches at rallies given by the above-mentioned.

Second, the bewildered grayhairs (and let's face it, the punditry is still overpopulated with men and women who have, as Bill Clinton says upon each of his birthdays, "more yesterdays than tomorrows") who use clowns like Beck and Hannity as shields are forgetting that while Obama's victory was decisive, a full 46 percent of the electorate voted for the other guy. That John McCain-the GOP's default candidate in a disastrous climate for anyone who'd been photographed shaking George W. Bush's hand-managed even that total is still surprising, considering his ramshackle and amateurish campaign.

Finally, as a citizen who is conservative economically but is just as appalled by the tiny minority of wackos who claim Obama's a communist or fascist (to say nothing of the noisesome canard that he was foreign-born and therefore not eligible for the presidency), it's offensive to be herded in Hertzberg's pigsty of crazies because I didn't support Obama and believe that the authors of the incomprehensible health care bills are out of touch with perhaps a majority of the country.

I have not tossed a tea bag in the air nor attended a town hall meeting and interrupted a politician's defense of the President's agenda. I don't watch cable television news shoes or listen to talk radio. However, is it lunacy to think that in the midst of an ongoing recession that an enormously expensive health care bill ought not be Obama's first priority? Is it lunacy to wonder if the government will manhandle private insurance plans and drive those companies out of business? Is it lunacy to question whether the government can operate health care with the fiscal restraint of an honest entrepreneur? And if the government does take control of health care-yes, I know there's an alleged "choice" of staying with a private insurer, but that won't last long-who polices the police?

These are reasonable concerns, shared by millions, and not the ravings of a Dittohead. Should Obama prevail with his objectives, there won't be a hint of insurrection from this quarter; after all, he's the guy who was elected. But in the meantime, spare me the invective directed at those who aren't in lockstep with Obama, Nancy Pelosi, Jon Stewart, The New York Times, and CNN.