Women secretaries of state are changing the gender makeup of the world's ambassadors. So why are we talking about it in the Style section? 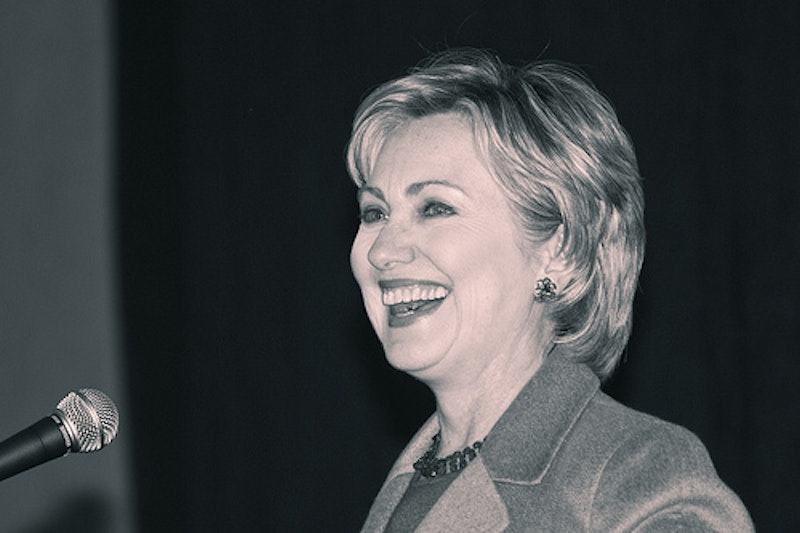 The Washington Post reported last week that the number of women serving as ambassadors to the United States has increased five-fold since the late 1990s. Today, there are 25 women ambassadors in Washington, D.C., representing countries from an impressive range of regions, including South America, the Middle East, the Pacific, South Asia, Central Asia, Africa and Europe. The rise in women ambassadors—to 25 out of 182—is attributed to the fact that three of the last four American Secretaries of State have been women, and specifically to Hillary Clinton’s visibility since she took up the position almost a year ago.

I’m a fan of Secretary of State Hillary Clinton, perhaps even more than I would have been of President Hillary Clinton. She is, as the Post rightly describes her, a “globetrotting champion of women's rights.” She is also a symbol of the United States’ commitment to advancing women and to leading by example when it comes to gender equality. The women ambassadors quoted in this article seem to confirm that their governments have been directly influenced by their interactions with Clinton and her women predecessors. According to them, some governments see sending one of their own women to Washington as a way to “signal that [they are] modernizing and in step with the United States.”

When it comes to gender, the US is ahead of the curve on some counts and woefully behind on others. Just as it would be foolish to assume that our nation’s racial problems have been solved by electing a biracial President, it would be naïve to claim an end to sexism simply because Madeleine Albright, Condoleezza Rice and Hillary Clinton have served as our nation’s top diplomats. For one thing, this article, which was essentially about international relations, ran in the “Style” section of the Post. Because even though it’s about diplomacy, it’s about lady diplomacy, so it belongs in the lady section of the paper. It’s kind of like putting an article about Arnold Schwarzenegger’s fiscal policies in the sports or entertainment section simply because he used to be an athlete and actor. But it seems clear that the US has effectively led by example when it comes to Clinton and other women in highly visible government positions, and for this we should be grateful.

The article also touches on the challenges facing many high-powered professional women in America, be they ambassadors or executive directors, namely, the challenges presented by token status. Token status, defined partly by how many members of a particular minority group are appointed and also by the reasons for which they are picked, plays a large part in the experience of women ambassadors to DC.

Being one of only a few women—or of any minority group—has its advantages, of course. The envoys quoted in the article note that being women in a boys’ club makes them “stand out.” But this is, of course, a double-edged sword: When you stand out, your successes are obvious, but so are your mistakes. And studies demonstrate that token women feel enormous pressure not to make mistakes, keenly aware that their performance will be taken as representative of all women’s abilities. Indeed, Madeleine Albright “said that when she spoke to foreign ministers around the world they told her governments had started thinking, ‘We need a Madeleine.’” Thankfully, Albright’s performance as Secretary of State, like Rice’s and Clinton’s, demonstrated to America and the world that a woman can be capable of representing her country at the highest levels. But the danger of tokenism is that one individual mistake can have a disproportionately large impact on the public’s perception of entire social group.

That said, the ambassadors profiled by the Post are aware that being one of only a few women “opens doors.” Singapore’s ambassador said that because of “male-female seating patterns, she often gets prime spots” next to influential men like George W. Bush and Henry Kissinger. Of course, the advantages these women experience are dependent on the fact that only 13 percent of the ambassadors stationed in DC are women. As the number of women ambassadors increases those advantages will disappear as women ambassadors become, if not the norm, then at least somewhat less remarkable.

A five-fold increase in women ambassadors is encouraging. With any luck, the US can continue to lead by example on women’s equality, even as we continue to battle the gender inequities that still exist in our own culture. And perhaps the next time there’s an article written about the impact of the American Secretary of State on the decisions being made by other governments all around the world, it will printed in the politics section.