No matter what happens in Iraq, we can’t forget what a mistake it was. 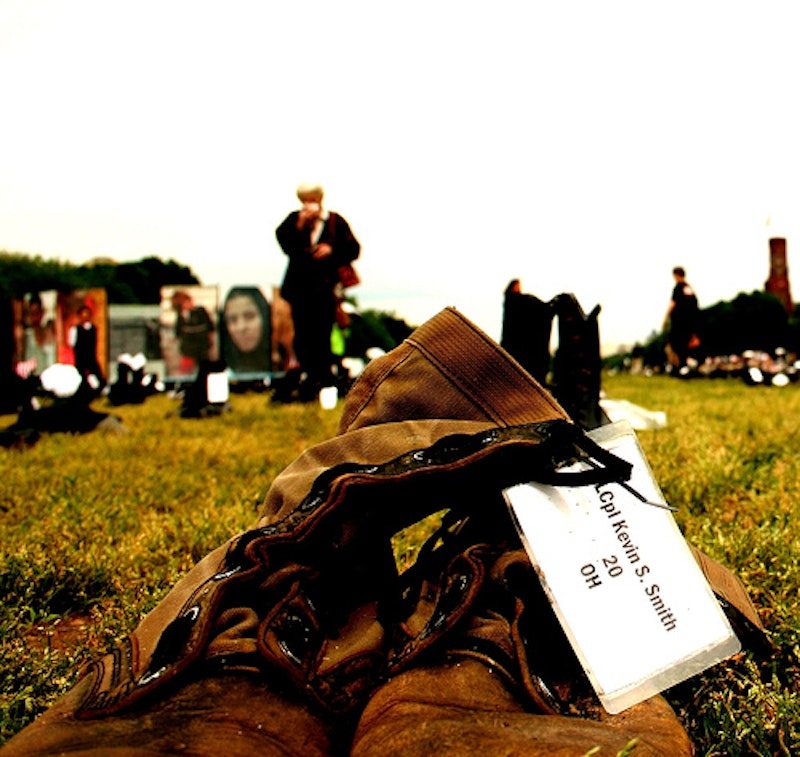 Maybe nobody wants to jinx it. It is entirely possible that a memo about avoiding the topic, circulating worldwide, simply missed my desk. Because I’m pretty sure that about a week ago U.S. forces pulled out of virtually all Iraqi towns and cities and—barring a few initial flare-ups —the country hasn’t fallen apart.

Shouldn’t this be headline news? Screw Michael Jackson, Sarah Palin, Mark Sanford, Russia, and all those other things hogging the front pages. We left the towns and cities—the places we were fighting the war—and Iraq is still there. This was unimaginable only a couple of years ago. Hell, this was unimaginable last year. And while I don’t want to short shrift our remaining troop presence here, the fact is we are not fighting the war we have been fighting since 2003.

Instead, we’re shifting the fighting back to Afghanistan, where we’ve been mired since 2001. One of my best friends will be shipping out there at the end of the month for his second tour there. When he last went, it was the largely forgotten secondary front, and when he came back he felt relatively sunny about our operation there (especially compared to the stories he heard about Iraq). A lot has changed in the past couple years. I had to say goodbye to him this weekend and I’m not sure I know why anymore. I don’t know what we’re trying to accomplish in Afghanistan. I’m not even sure President Obama knows what we’re trying to accomplish. It seems to be little more than some vague, intangible sense of security.

It’s not that we shouldn’t be there in the first place. The initial mission was straightforward: unseat a regime that was providing for and harboring people trying to destroy the United States. We were after al-Qaeda and bin Laden. There was a very real military and government standing between us and the people who were trying to destroy America. But we destroyed that government and that army. Viable democracy is no longer even a mentioned goal in Afghanistan, as it always has been, even during the most violent times, in the better educated, more modernized Iraq.

Lasting democracy in Iraq would mean more to Middle Eastern/world stability than lasting peaceful democracy in Afghanistan ever could—Iraq is too populous, too centrally located, and has too much oil for it to be any other way. The best case I can imagine in Afghanistan at this point, even the best outcome suggested in the aforementioned Presidential Plan is that the Taliban and al-Qaeda are whittled down to near-useless numbers, occasionally popping up in random acts of terror but of little threat to the Afghan and Pakistani governments. There doesn’t seem to be any outcome in Afghanistan other than a pseudo-democratic authoritarian regime with a loose collection of local warlords ruling the interior of the country. I’m not sure how different that scenario is from where we are right now.

Years from now, if Iraq is a thriving democracy and Afghanistan still a weak, violent state, we may look back at the past decade of our involvement in the region and come to the conclusions that I’ve already heard a few friends and family make: Iraq = tentative success, Afghanistan = utter failure. No one questions that the wars have been run in inverse quality. The extreme mismanagement in Iraq gave way to lucky, then clever moves, while Afghanistan started smoothly then descended into an unpredicted chaos.

This, however, is a dangerous conclusion. No matter what happens in Iraq, even if history stands behind George W. Bush’s decision and the world is a better place post-Iraq War, it was a mistake. The justification for the war was wrong and misleading. The way we conducted the war was brutal and un-American. Reversing our entire history of foreign policy with the unleashing of preemptive war, the lingering issues of torture, the stain of Abu Ghraib—we have forever lost a noble part of who we are. The ends do not and cannot justify the means. Regardless of our “success” or “failure” in Afghanistan (and, really, what does those words mean anymore in this case?), at least we entered in response to attack. At least we carried out a war of self-defense instead of a war hiding behind false ideals of liberation.

It sickens me that this is getting slid under the rug. I want peace and stability in Iraq and the Middle East just as much as anyone. I recognize that we made the decision, we have to live with it, and we ought to make the most of it. But do not forget what atrocities we have accumulated to get here. Do not sanctify George W. Bush as a prophet, although that’s still unlikely.

I always got frustrated when people would talk about the Iraq War as the most horrible thing anyone has ever done in the history of time. It was something I really hated hearing about when I left this country. (Hearing Germans talking about U.S. conduct in Iraq as some of the world’s worst horrors left a particularly bitter taste in my mouth.) I am not saying that this is the low point of human history or even our history. But at the peak of our power, with no other nation within even a sniff, we violated so many of the principles we hold dear and we preach to the world. And I hope that this moment doesn’t get erased from the history books. Let it fester there like the scar that it should be. This was a mistake. And as much as it hurts me to watch my friend go, at least I know why we’re there in the first place. And at least he’s not going to Iraq. I wish I could have said the same for all the poor kids that did.