Tell Me When It's Over

More than a week after Michael Jackson's death, decency and rational minds are still in short supply. 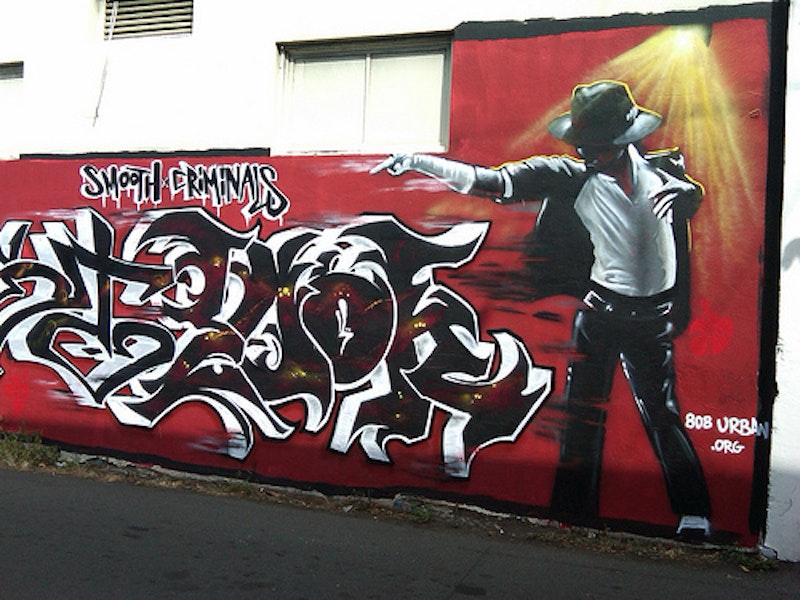 Sorry, but the gusher of mourning and adulation that exploded after the news of Michael Jackson’s death eight days ago didn’t even dent my consciousness. It was hard to avoid the aftermath—the unseemly profiteering, the constant Today Show updates and interviews with anyone associated with the misnamed “King of Pop” (did the ubiquitous historian Douglas Brinkley, JFK Jr.’s sudden best friend after the former president’s son was killed in ’97, make any appearances?), and the fascination with paternity, The Will, and Diana Ross—but try I did. The untimely curtain calls for David Foster Wallace, River Phoenix and Jeff Buckley, to name just a few real shockers, those got my attention. But Jackson? I hadn’t thought about him in years, and although it was inevitable the ghoulish celebrity worship machine would crank into full gear for Jacko—as the U.K. press first dubbed him—tributes, I’ve seen the “Billie Jean” video enough for one lifetime.

Say it was Madonna, from that same era, who bit the dust: that would’ve grabbed my attention, even though, aside from “Papa, Don’t Preach” and her role in A League of Their Own, I was never a fan. As John Lingan wrote last week, Jackson was in the throes of a “prolonged suicide,” so much so that he might as well have been dead already. The enduring image of Jackson, at least to me, is the shot of him dangling his kid over the balcony of a hotel in Berlin. And that’s way too creepy. It should be noted that like so many others of my generation, when the Jackson Five’s outrageously infectious “I Want You Back” ruled the Top 40 in early 1970, I immediately bought the single, amazed at young Jackson’s voice. No, he didn’t quite have the power of Little Stevie Wonder—but what squirt did?—yet the comparison was fair.

There were a few other J-5 songs that were worthwhile—actually, “Never Can Say Goodbye” is the only one I can think off-hand—and then the brothers split and Michael sang some atrocious songs like “Ben” before entirely capturing the world’s attention with Thriller. It was a good record with the two songs, “Billie Jean” and “Beat It” (Eddie Van Halen’s most legit claim to fame) where Jackson was on a different plane, seemingly infused with triple-talent, not unlike the Stones’ “Gimme Shelter,” the Smiths’ “The Queen is Dead” and, to a lesser extent, the Hollies’ “Bus Stop.” It’d be impossible to surpass that duo, and he never did, and after that intense part of his career, I checked out on Jackson, save when his tabloid exploits couldn’t be avoided by a voracious media that was, and is, in the business of exploiting tragedy and bizarre behavior, even after showering the same person with hyperbolic glory during better times.

So, I don’t get the millions of people still wandering around like zombies in reaction to Jackson’s demise. On the off chance this is coming across as cold-hearted, rather than quite reasonable, I’ve also been stunned by the sudden deaths of celebrities. Couldn’t believe it, for example, when I learned in ’69 that Brian Jones, just weeks after getting the pink slip from Jagger and Richards, was found dead in his swimming pool. Jimi Hendrix and Janis Joplin, within two weeks of each other in 1970, of course; Otis Redding in a ’67 plane crash; Jim Morrison dead in a Paris bathtub in ’71; and Gram Parsons in ’73. And I don’t think that anyone with a pulse wasn’t taken aback on Dec. 8 of 1980 when John Lennon was murdered; like so many other people, I heard the news from Howard Cosell during the broadcast of Monday Night Football. After all, Lennon was a Beatle, and no matter how many records Jackson sold and the influence of his videos, the two don’t compare. At least to me; again, it’s generational. (Just imagine, so to speak, if today’s communications industry was in gear when Lennon was rubbed out; I think that would’ve dwarfed the obscene blitz of the past week.)

Yet even when Lennon was killed, it was hard to reconcile the behavior of some of his fans. A fellow who worked with me at Baltimore’s City Paper at the time, the distribution manager, was in a haze for at least a month, unable to eat much, speak or even move at times. He kept repeating the odd mantra, “John’s dead. It’s all over,” and this seemed very strange, for it’s not as if Lennon was a family member or that he’d ever met the man.

Is Sly Stone still alive? If so, he might awake out of a haze and just repeat one of his most famous lyric, “Different strokes for different folks.”