The twilight of "Dont't Ask, Don't Tell" is nigh. This is a good thing for heterosexuals. 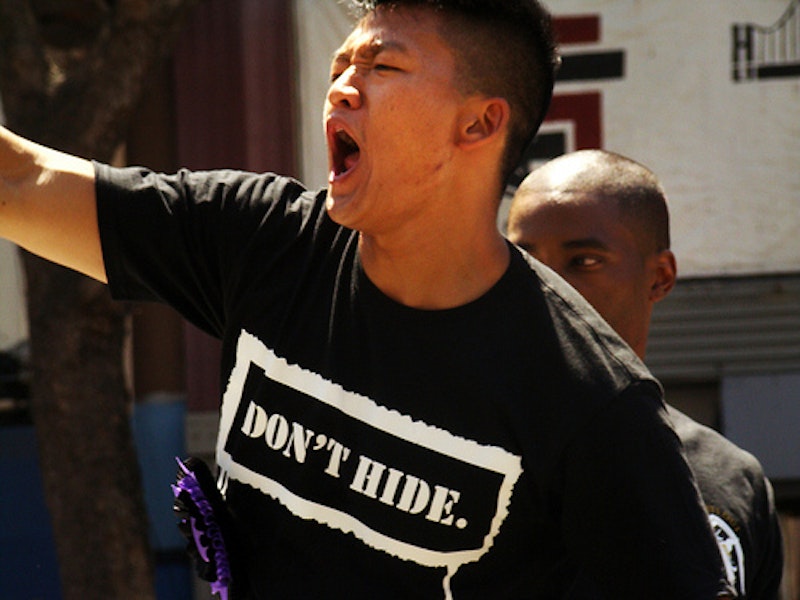 So what’s all the fuss about repealing four little words, “don’t ask, don’t tell,” from America’s catalogue of social limitations and allowing anyone, gay or straight, male or female, to serve in the military? It’s gays’ God-given right to have their limbs blown off just like anyone else if they so choose. In war and peace, there should be no sexual orientation distinctions in foxholes. The twisted riff of “don’t ask, don’t tell” is this: Ask if there are gays in the military and they’ll tell you yes while denying there are.

Anyone who objects, and certainly there are many, Democrats and Republicans alike, surely isn’t seeing the issue clearly. Nor do they get the point of allowing gay (and straight) partners to make medical decisions for each other. There have been changes in the law to protect gays against crimes motivated by sexual orientation. Some day that language might save the lives of straights.

And only recently, the attorney general of Maryland, Douglas F. Gansler (D) ruled that the state must honor same-sex marital contracts performed in other states by extending the same rights and benefits offered to heterosexual couples. The ruling has the force of law until/if the General Assembly or the courts decide otherwise. And Gov. Marvin O’Malley (D) has ordered state agencies to implement the ruling even though he indirectly opposes gay marriage.

So what’s the difference for the military? The concern appears to be more about implementing the change from the current closet policy than any great moral uprising. After all, military living is close quarters. Aboard ship, there are about two feet separating bunks, top to bottom, and in barracks two or three feet across between beds. Showers in both cases are communal.

Sex-based crimes work both ways. This might just be the last chance to protect average fun-loving, bed-bouncing heterosexual men and women from sex-motivated hate crimes by gays.

Remember that homosexuals have dominated entire civilizations, and in those civilizations heterosexuals were considered second-class citizens. Pederasty and pedophilia ruled during the Golden Age of Pericles, when philosophers were kings and the kings were a couple of queens named Plato and Socrates. Solon, the statesman and lawmaker (638-558 B.C.) engaged a series of gay lovers and drew up laws to protect the institution of pederasty. And you can bet that Aristotle did more than teach cosmology to Alexander the Great. In those days, and even in some quarters these days, little boys were sex objects.

Rome was not ruled by a bunch of bullies who resembled Charlton Heston and Russell Crowe. Rome had its share of gays, and along with the pacifying influence of Christianity, they were among the reasons the Empire went to hell in a hurry.

Pompeii swung both ways. Pompeii was one of the most hedonistic cultures in the glory days of the Roman Empire, kind of a sublime vacation spot where both gays and straights went to sow their oats. But Pompeii had the misfortune of being located at the base of a volcano named Vesuvius. The city was frozen in lava, and the excavations reveal a culture that devoted equal attention to the preferences of homosexuals as well as heterosexuals. Pompeii’s bisexual brothels were vividly and lavishly illustrated, and into its cobblestone streets were carved the “flying phalluses” pointing directly to the entrances of the palaces of pleasure.

The Incas (1200-1500 A.D.), another highly civilized culture, were wiped out in part because the warriors were so consumed by homosexuality that they ignored procreation and failed to multiply. An undefined disease also helped to decimate the male population of the Inca nation and what has evolved into Peru.

The Old Testament is great reading, full of fun, fury and fulmination and as much excitement and violence as you’ll find in any movie house or on cable TV. It’s filled with words such as “smite” and “smote.” Every good script has it sex scenes. The Old Testament gives us Sodom and Gomorrah, the twin cities the preachers like to cite as an example of what will probably happen to Maryland, America and the military now that “sexual orientation” is on the list of hate crimes, gay partners are allowed in intensive care units to make medical judgments for partners and perhaps removal of “don’t ask, don’t tell” will eliminate questions about any military person who snaps a towel suspiciously at another on the way to the shower.

Finally, there’s San Francisco, a contemporary urban culture dominated by gays. There, the law protects heterosexuals more than homosexuals because of the strong influence of gays in every aspect of the city’s life, including matrimony. In San Francisco, a gay can be fired for mistreating a straight. San Francisco boasts about its roster of openly gay officials, ranging from appointed judges to members of Congress to members of the Board of Supervisors and even to a former ranking member of the Clinton Administration. Sean Penn won an Oscar for his portrayal of Harvey Milk, the gay city supervisor who was gunned down in 1978. Milk, considered in San Francisco a martyr for gay rights, was a Navy submarine officer during the Korean War.

What many gay-bashers fear most is that homosexuals are no longer type-cast as limp-wristed hi-swishers and are becoming more difficult to identify. They actually dress like people who go to work every day as doctors, lawyers, teachers, accountants, brokers and, yes, even cops. In fact, the Maryland General Assembly has its share of openly gay members, as does Congress. And remember Maryland’s own Eastern Shore, Republican Rep. Robert Bauman, who by day was a gay-basher but by night was cruising men’s rooms in the nation’s capital city?

As gays continue coming out of the shadows and ascending in the professional, managerial and military ranks, it’s becoming even more necessary to scrub the vocabulary and have “sexual orientation” classified as a hate crime and “don’t ask, don’t tell” removed from the military code because of the measure of protection they offer to heterosexuals.

It’s easy to imagine a gay person and his (or her) partner assaulting a straight person because of a cock-eyed look or potty-mouth remark. And what about a largely homosexual community guy-bashing heterosexual married men because they sleep with their wives? And think about a gay doctor who refuses to treat straight patients or counsel their families at death. And what about a gay Marine who refuses to go into battle under the command of a straight lieutenant.

Much of what happens in government is a matter of presentation as well as of perception. Bad public relations will produce bad laws. Most political leaders like to believe they’re ahead of the curve on most issues. Yet mainly they’re reacting to public demand because most social progress originates on the streets and not in the marble corners and crannies of Congress or the State House. And this is precisely what is happening with “don’t ask, don’t tell,” just as it did with codifying hate crimes and gay marriage. President Obama made a promise to gays. Now he’s being forced to deliver.

In other societies in the past, and perhaps among those in the future, it just might be heterosexuals who are discriminated against, who need the protection of forceful law. It’s about time that heterosexuals stand up, declaim their sexual orientation and demand legal protection against hate crimes by homosexuals. The problem with the new laws is the language. They should be called “straights rights.”