Slotzntracks: As American as Money 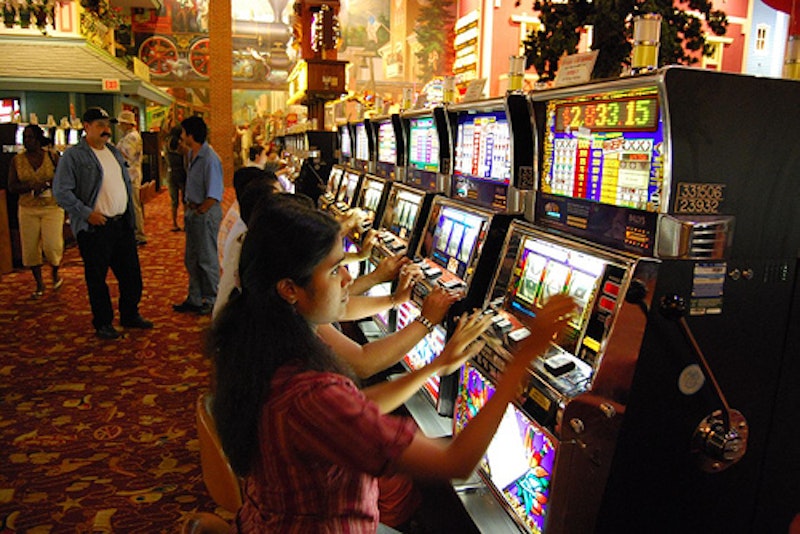 Listen to the caterwauling of the racing industry, and you’d think that horseracing and slot machines are inextricably linked. These days it’s almost impossible to mention one without the other as if they’re joined at the hip as interchangeable sports, which some people would like us to believe. They’re not. Slot machines are not about horseracing. They’re about money. And nothing comes between good friends like good money. So when Tom Chukas, president of the Maryland Jockey Club, pronounced horseracing dead because Laurel Race Course was eliminated from the slots auction, he might be right. And if he is, the racing industry killed itself a long time ago and not because of slots. The industry failed to move with the times by cultivating a new generation of bettors and died by its own hand.

But Chukas and his cohorts in the racing business might be trying to distract Marylanders with a steady flow of crocodile tears. Weep not. Under the slot machine law, the racing industry is scheduled to pocket 9.5 percent of the proceeds from slot machines, an anticipated $140 million a year. Or why would the likes of high-rollers such as Peter Angelos, the owners of Penn National, Joseph DeFrancis and David Cordish (who won the slots franchise for the Arundel Mills location) be bidding on Pimlico and Laurel in the auction by bankrupt Magna Corp. Even entrepreneur Mark Vogel is attempting to resuscitate Rosecroft Raceway, the Prince George’s County track that he owned once before in the 1980s.

Cordish has said that if he wins the auction of Pimlico and Laurel he’ll invest some of the proceeds from the Arundel Mills slots location to upgrade the tracks and help preserve horse racing. Cordish has also said that he’s interested in the Baltimore City slots location in the area of the stadiums. The bidders on that site, Baltimore Entertainment Group, were disqualified for lack of financial resources after the city did cartwheels to finagle a better location and expand the number of slot machines. The present law specifies that no person can own more than one slots franchise, so a change would be required. And since the law is in the form of a Constitutional Amendment, there is a question of whether the General Assembly can make the change without ballot action by the voters. It takes the voice of the people to change the Constitution.

When the General Assembly drafted the slot machine Constitutional Amendment, only one of the five locations was a racetrack, and that was Ocean Downs, outside the perimeter of Ocean City. An Anne Arundel County square on the map that brackets Laurel Raceway was left deliberately vague. The designated area sprawled 65 square miles of Anne Arundel County. What’s more, Laurel (Magna Corp.) failed to come up with the required cash down payment that was to accompany its bid, which was disqualified.

In fact, the Anne Arundel County Council, which had dawdled for 10 months over zoning changes for a slots emporium, adopted competing bills which would have awarded slots franchises to Arundel Mills and/or Laurel. County Executive John Leopold signed the Arundel Mills bill but vetoed the Laurel bill.

Pimlico, in the Northwest section of Baltimore, was considered the least financially productive location for a slots parlor and was deliberately left out of the package of sites because of community and local legislative resistance. An earlier House of Delegates bill included Timonium Fair Grounds. But that bill was rejected by Senate President Thomas V. Mike Miller (D-Calvert) and Gov. Robert L. Ehrlich Jr. (R). The fair grounds are situated in the heart of what was then Ehrlich’s political back yard in Baltimore County.

Yet in Maryland, it’s almost as if slots and tracks have become so telescoped they are, in the quirky adenoid dissonance of Baltimore catarrh, one word: slotzntracks—two issues intertwined because they are both as American as money.

It is an undeniable fact that wherever slots and race tracks co-exist in what are called “racinos,” the grandstands around the track are empty but the slots parlors are packed with people of all ages, colors, shapes and sizes blissfully unaware that there are horses running around outside. In fact, William Rickman, who won the Ocean City slots license, also owns a race track/slots operation in nearby Delaware, which could explain why he’s installing only 800 machines at Ocean Downs.

In a perverse kind of way, it’s the proximity of Arundel Mills to Laurel that could help undermine racing. Because Maryland is getting slots doesn’t mean people will increase their amount of gambling dollars. There are only so many recreational dollars to spread, so the pot for each gambling venue shrinks. More people at Arundel Mills translate to fewer people at Laurel. Even State Lottery revenue is projected to decline five percent when slots are fully operational.

Horseracing and the state of Maryland have been cozy bedfellows for centuries, dating back to the days of George Washington and Old Hilltop. Until about 25 years ago, the state’s take from the racetrack handle was 18 percent. Today it is one half of one percent, a generous subsidy to help support the industry.

During Gov. Parris Glendening’s (D) years in office (1995-2003), the state was subsidizing the racing industry to the very melodious tune of $10 million a year in a direct cash grant. The subsidy was discontinued by the vindictive Glendening when Joseph DeFrancis went afoul of his political wishes by contributing to Ehrlich’s 2002 campaign.

DeFrancis also was ejected from the Maryland Jockey Club when Magna exercised its option to buy his remaining 49 percent interest for $18 million and change. And as a toothsome bonus, they confected a sweetheart deal to share in a large chunk of the profits from slot machines if they were to materialize at Laurel and/or Pimlico—65 percent of the profits for the first five years, 50 percent for the next five years and 40 percent for the next 10 years, according to reports at the time. The arrangement has since been contested.

The racing industry also likes to bemoan the number of jobs that would be lost unless Laurel gets slot machines, 25,000 in all, they claim, across the industry. But many of those jobs are low-paying and involve such charming assignments as mucking stalls and working the backstretch under conditions that would send the olfactometer into the red zone.

Racing in Maryland may or may not survive and thrive, but it doesn’t necessarily depend on slots. It’ll take someone with brains, imagination and money, of course, to revitalize the sport. Slots are not about racing. Slots are about money.