Blogs need to get together if they ever hope to replace the newspaper. 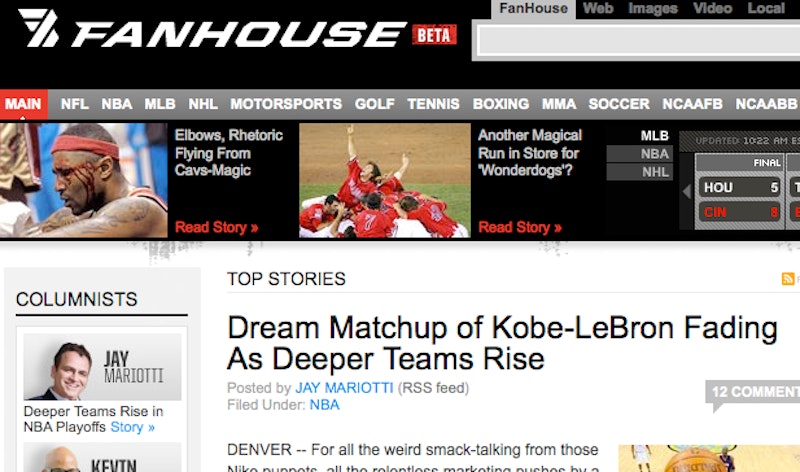 Newspapers are standing at a precipice, and none of us has any idea what may step up in its stead. Blogs may not be ready yet, but they seem to be moving ever closer to the top of the mountain. A couple of weeks ago, I discussed the synergy between blogs that can provide niche analysis to an extent never before seen. This relationship is certainly an advantage, but compared to the resources available to a newspaper, it is not necessarily the answer that everyone’s waiting for.

If blogs are to fill a void left by newspapers they need to go one step further: get a little Marxist and organize. This is actually already happening—blogs and bloggers that were at first members of a community are slowly metastasizing into something more concrete. There are three templates that we’ve seen so far, and I believe they will only get more pronounced as they go further. Named after their archetypal sites they are: The Sporting Blog model, the Huffington Post model, and The Fanhouse model.

To reach the level of depth that we have right now in our top tier newspapers, we first have to make peace with the fact that one website may not cut the mustard. Likewise, news cannot be entirely farmed out to a disparate collective of bloggers, forcing readers to sift through pages of commentary links before inevitably reaching the destination for news. There needs to be a place where you can go and expect to see the news of the day, not just the news for your block or your team, but the news in general. If something is happening with Michigan football, I go to the Michigan blogs. However, I couldn’t name you a single Cleveland Cavaliers blog and right now I want to know what’s going on with the Cavs.

So I am faced with two choices: hunt down a respectable blog with no idea where to start or get the barebones facts from a generic ESPN or Associated Press or mainstream media article about the NBA playoffs. Yes, there are web search engines, but the beauty of blogs lays in the reader’s ability to gauge quality instantly, not the reader’s ability to find quality instantly. When dealing with information in my comfort zone, it’s easy to figure out where the good commentary and journalism is because bloggers I trust usually link to it.

Enter The Sporting Blog, the blogging wing of The Sporting News. It has in the past few months, gathered some of the best sports bloggers in the country (and who were already linking to each other) in one place. Everyday Should Be Saturday (edsbs.com) and MGoBlog (mgoblog.com) are still better than ever but now we get a double dip of Spencer Hall and Brian Cook, respectively, as they tackle sports-in-general at The Sporting Blog. Cross-pollination can easily take hold as readers follow contributors back to their home blogs, but it doesn’t mean you can’t just pop into The Sporting Blog to get the gist of the day’s sports news. The coverage is both deep and wide, and provides easy access to the team-/sport-specific blogs that make the Internet such a delight.

This model is well-suited to bringing generalized commentary as well as specific bits of news and information. It does not, however, address the problems of boots on the ground. For this, we need the Huffington Post model. HuffPo is the antecedent to The Sporting Blog, an Internet-only news service with hundreds of bloggers, all posting for free, built on the backbone of the cult of celebrity. If HuffPo were to go nonprofit (as advocated by critics like this) or even barely for-profit, it could reinvest its money in small teams of bodies on the ground in major cities across the world or even simply pump that money into a partnership with a news wire like the AP. It needn’t only be HuffPo that fills this void; the future online shells of the elite mainstream papers could easily pick up the slack. The New York Times could certainly allow prestige to trump pay and get the top commentators and journalists blogging and writing columns; indeed, they already have some of the best in the business.

The daily output of commentary in these larger institutions can essentially subsidize not only daily news but also the longer-term journalism that gets lost in a lot of the midlevel papers’ day-to-day shuffle. It will require the watering down of some editorial pages in terms of exclusivity, but if selectivity remains high then the big papers and collectives can use blogs as a cheaper way to garner page views and advertising dollars.

The Fanhouse model inspires much less confidence but deserves mention in this space. Fanhouse essentially began in the same vein as what The Sporting Blog is trying to do, but has since shifted from blogosphere members to ex-newspaper columnists. There is some viability here: most of the posters have name recognition, especially from their television appearances on networks like ESPN, which can draw a crowd and possibly allow for some investigative digging. My fear with this method is what I call the Jay Mariotti Principle. Mariotti is an unoriginal blowhard on ESPN, he’s an unoriginal blowhard in his columns and he’s an unoriginal blowhard on his blog. Just because he’s popular in the newspaper and recognizable on TV doesn’t mean he brings quality. Unfortunately, the Fanhouse seems unable to break away from the lack of creativity and originality that hampers a lot of mainstream sports (and to a lesser extent news) coverage. It sucks because sites like the Fanhouse theoretically provide a home for journalists who are losing their spot at the daily papers, but it’s the garish, antagonistic voices that seem to be landing on their feet rehashing the same tired memes.

The truth is, we need at least two out of these three methods to succeed in the fullest. The Sporting Blog is nimble, flexible, and focused without being too specific. Behemoth blogging institutions could even eventually farm out their coverage the smaller blog collectives, putting their breaking news on the front page to supplement their own work. The decline in competition for stories will hurt the news and there may not be a way around it. But all journalists are not created equal and paring down to small teams of journalists that have risen to the top of a relatively pure meritocracy will keep people accountable, especially with the cacophony of focused commentary behind them to breathe life and legs into stories. Let’s hope newspapers can stick around for awhile longer, but if they don’t, there is a developing model to support the system.