Rick Warren Was A Good Pick

To all outraged "progressives," gay or otherwise: what would you rather have Obama do? 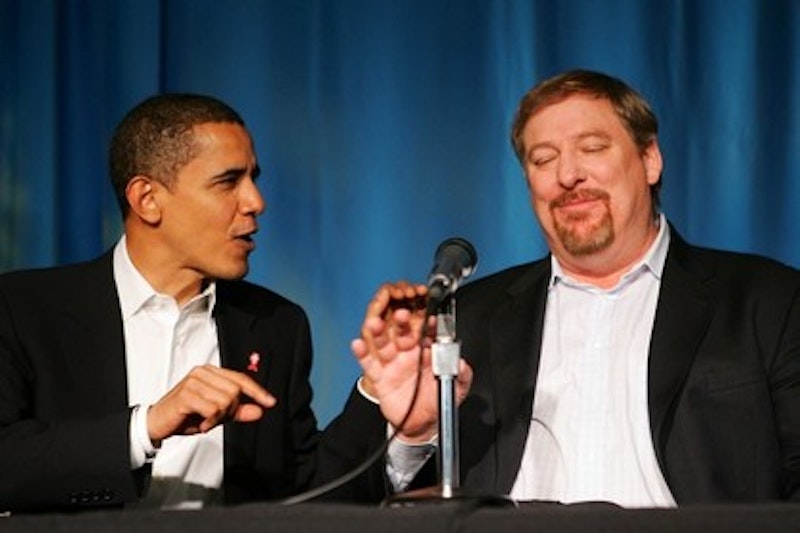 There are many reasons why the controversy over Obama's selection of Warren to perform the inaugural invocation is stupid. I plan to list every single one of them.

First, the invocation is ceremonial. It's publicity, theater, a show; to the cynical, it's marketing. It isn't policy. It won't change anyone's life. So, as a sometimes-angry gay, I'm going to take a deep breath and calm down. You should too. I know gays are mad at Obama for not being pro-marriage and for saying repealing "Don't Ask, Don't Tell" is not at the top of his list (with a Depression imminent, should it be? C'mon, gays!) Let's at least wait until after January before getting all hot and bothered about Obama's screwing us over. You know, when he's actually doing something.

Second, as publicity, it's not half bad. Since 2004 Obama has talked about ending the blue state/red state divide. Are people really surprised by this? The hoopla over Warren shows that message needs to be restated, because the divide persists. People in the media must have no idea how popular Warren is. Even my Obama-loving mother owns his book, The Purpose Driven Life, which is one of the most popular Christian books in America after that other popular Christian book: the Bible. Purpose Driven Life is  Warren's real claim to fame—not his anti-gay views—and the book is not hateful. It's Christian self-help. It's bland, but powerful to whose believe.

Third. Okay, so Rick Warren opposes gay marriage—who cares? Most people do. Rick Warren is pro-life and in many other ways a social conservative. So what? A lot of people are. Yes, the indefensible part is his disapproval of gays as people who are undeserving of God. Yes, it's bad. But, while this is a minority view, it's a view held by people who are still Americans, and not Obama voters (how soon we forget that McCain over-performed in the south and Appalachia, with the exception of NC and VA). Obama is reaching out, and good for him. I hate how liberals simply dismiss the religious right as morons; it's like we want to be irrelevant. Please, please ignore us America!

Obama is doing his job. He's saying to the country: I want to be the president of all of you, not just the ones who agree with me. This is the mistake Hillary Clinton—and a lot of Boomers—made when she ran healthcare reform in 1992. It was "us" versus "them." That's not a winning formula if you want to pass important legislation by solid margins. It is only a good strategy if, like the Bush administration, you want to barely pass terrible legislation.

Fourth, any attempt to imply an Obama policy shift from the Warren selection is pure hypocrisy from the left, who argued against Rev. Wright as a relevant campaign topic. I honestly don't think Obama agrees with Wright on what black politics should look like, and I don't think he agrees with Warren. But what kind of world do we live in if we can't accept a prayer from someone different from us? How cynical and angry have we become?

Finally, while Rick Warren's views are in many ways retrograde, he is not a James Dobson, Jerry Falwell or Paul Weyrich. He's not a doctrinaire conservative. His work on emphasizing poverty, inequality, and climate change is not insignificant. It shouldn't be dismissed in a short sentence, as the media has done over the past week. Warren is trying to move the Moral Majority forward on exactly the critical issues Obama will need to act on fast. Our world is dying. Our economy is unfair, unequal and going south. Forgive me if I forget Rick Warren isn't too fond of gay marriage.

I'm willing to take Obama to task when the time is right. If he never acts on gay non-discrimination, Don't Ask, Don't Tell, and the Defense of Marriage Act, I will get up in arms like all the rest. But the Warren pick isn't anything but a gesture, a signal that he's not Bush. Obama is not going to push his own agenda, Rove-style, while forgetting nearly half the country didn't vote for him. Isn't that, at least for now, exactly what we need to hear?