Of Course They're Playing Politics

Save the GOP crocodile tears: Rahm Emanuel's role in the current Limbaugh fiasco is no more calculating than any standard-issue campaign tactic. 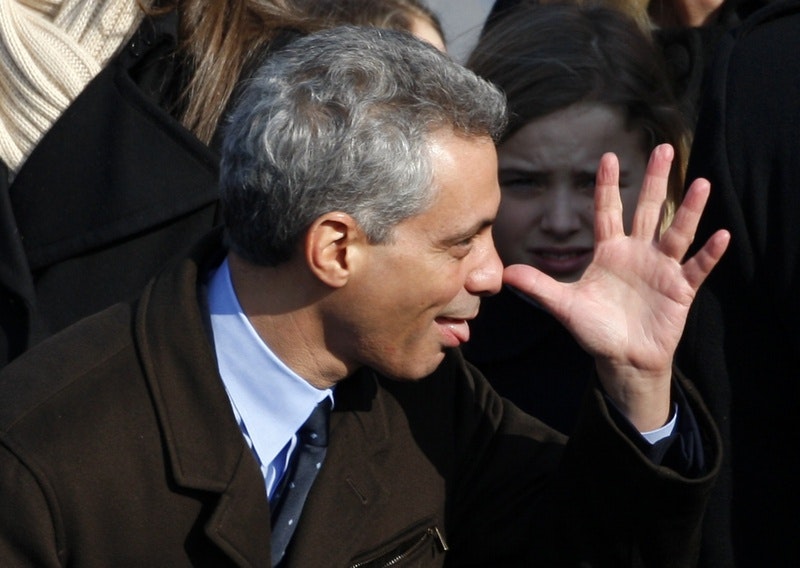 Politico broke the news that the portrayal of Rush Limbaugh as the leader of the Republican Party has been a Democratic strategy all along. I suspected this, but only because I was born with eyes and ears. However, it did surprise me was that this was not some ad hoc tactic, as I initially thought—it was actually developed as early as October 2008, and one of the masterminds behind this plan was President Obama’s Chief of Staff, Rahm Emanuel. Well, you can imagine my shock and outrage upon learning this information. Let me see if I can recreate my internal monologue for you: Hmmm…. I wonder if the Cavs are on TV tonight…

Seriously, am I just too far in the bag for Obama to see a problem here? Granted, the people who will probably be the most upset are those who did not like Barack Obama in the first place. For example, Sen. John Cornyn released a statement recently saying:

During his campaign last year, President Obama promised to bring a new tone to Washington… Yet, just weeks into his Administration the President’s staff has been caught engaging in a coordinated and cynical political attack game—the very diversion and manipulation then-candidate Obama attacked the McCain campaign for last year.

Put aside your current mindset and think about this “plan,” which was drawn up by Emanuel, James Carville and Paul Begala, as if it were October 2008. Somebody says to you, “According to our polling data, Rush Limbaugh is really unpopular among people under 40 [even more than Jeremiah Wright!], so we’re going to try to paint him as the leader of the Republican Party.” To me, that would have sounded more like a wish than any sort of rock-solid plan. I would have reacted by saying that it would be nearly impossible to achieve because you have John McCain, Sarah Palin, and a whole slew of former or potential presidential candidates who would never allow themselves to look subservient to a talk radio personality. But suddenly, Emanuel’s “plan” started falling into place: McCain said, “Screw you guys, I’m going home”; Palin was the future of the Republican Party for, eh, I’d say a little over a week; Rep. John Boehner was found to have the personality of a palm tree; Sen. Mitch McConnell’s puckered face is painful to look at; Gov. Bobby Jindal started talking; and Eric Cantor is just a young guy with a strong jaw line, so he simply seems like a potential leader.

It became clear that no one was really willing to step up and be the Republican leader; instead you had a bunch of well-known Republican figures waiting around to be anointed by the ghost hand of Ronald Reagan. Once that became clear, the Democrats started plugging away, referring to Limbaugh as the leader of the Republican Party. Then, an amazing phenomenon started to occur: Republicans started bad-mouthing Rush, and then immediately tucking their tail between their legs and apologizing for it! Shit, when you look back on all of this, it feels like the Republicans were the ones plotting to portray Rush as the leader of their Party, not Emanuel.

And now we discover that this was a strategy of the Democrats, and the Republicans are going, “Oh shnap! Can you believe what Obama’s trying to do! Portraying Rush Limbaugh as our leader! Pfffft. Jeez, what a world… What’s that you say? ‘Is Rush the leader or not’? What kind of question is that? [tugs at collar] Is it getting hot in here or is it just me?” Even Rush won’t argue the point (his ego won’t allow him to deny it). So, since “Rush is not the leader of the Republican Party” is not one of the arguments being used to discredit the Democrats and the current administration, there are several alternative lines of attack being pursued.

First, as evidenced by Sen. Cornyn’s statement, people are arguing that this is an abandonment of Obama’s campaign promises to change the tone in Washington and to stop “playing politics.” I hate when people use the phrase “playing politics,” and that includes when Obama says it. It’s a cheap appeal to the public because “politics” has become a four-letter word. Aristotle once wrote, “[M]an is by nature a political animal.”

Politics is how we solve problems and better society without fistfights or simply grabbing our guns. So, if Obama crafts a strategy to challenge the Republican Party by questioning their leadership, that’s no different in my mind than his campaign strategy to expand the electoral map and challenge the Republicans in states they were used to winning. I always interpreted Obama’s promise to change the tone in Washington as a promise not to be so secretive and to at least reach out to the Republican Party and include them in discussions. Obama even reached out to House Republicans when he didn’t need a single vote from them on the stimulus bill. This promise remains unbroken in my mind, and it’s especially impressive considering polls show that a majority of Americans don’t feel that President Obama should even bother reaching out to the GOP.

The second line of attack, stated by Rush and also mentioned in Sen. Cornyn’s letter, is that this is all intended to be a huge distraction from the real issues. Rush stated on his show that Emanuel, whom he admirably referred to as “effeminate” and described as having “the feral instincts of a female rat defending its young,” simply wants to distract people from having a serious debate on the issues:

[The administration’s] goal is to destroy opponents… They don't want to engage opponents. Their idea of victory is the destruction of the opponent. They're not for a level playing field. They want to clear the playing field so that their ideas do not have to undergo any scrutiny.

Of course! That’s all Rush wants—a serious debate. Rush wants fair negotiations; not strong-arming by one Party over the other. Why, just look at his definition of bipartisanship, which he illuminated during his CPAC speech: “To us, bipartisanship is them being forced to agree with us after we politically have cleaned their clocks and beaten them. And that has to be what we're focused on.” But I genuinely disagree that Emanuel’s strategy is a distraction from political discourse (ironically, the only people who seem to be ranting and raving about this are conservatives). In actuality, identifying Rush Limbaugh, or anyone for that matter, as the leader of the GOP enhances the political debate. Think about it—when you want to know the Democrats’ stance on something, you look to Obama. But when you want to know where the Republicans stand on the same issue, who do you turn to? Bobby Jindal’s Folksy Storytime Hour? How can you have a serious political debate when both sides haven’t been clearly enunciated?

Listen up, Republicans: human beings are organisms which evolved with a spinal cord—wait, let me try this again: 6000 years ago, God said, “My, these humans I made are always so slouched; it makes them appear as if they are weak and can be taken advantage of. Jesus, bring me those dowel rods…” And, lo, the Lord giveth us backbones. I recommend you find yours, and prove that the Democrats are wrong when they say Rush Limbaugh is the leader of the GOP.