The president-elect could have handled the post-Bush meeting a little better by matching W.'s magnanimity. 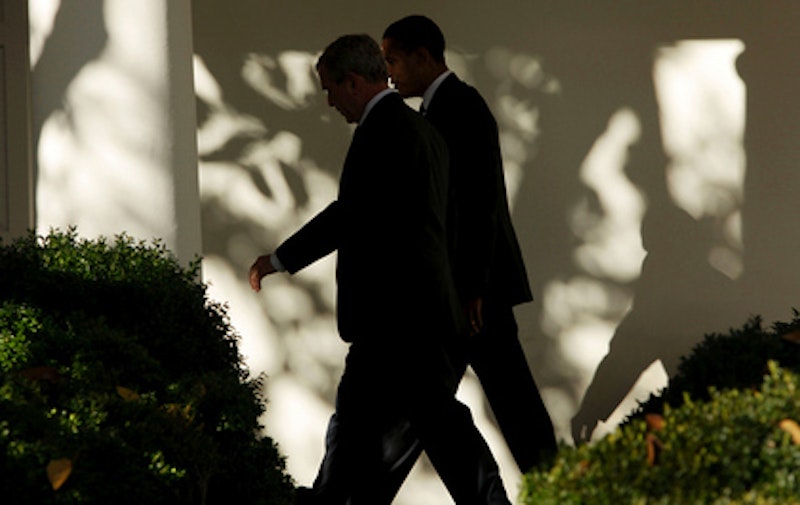 Like many, I watched with interest this week as President-elect Obama visited President Bush at the White House. While watching the video and seeing the pictures of Bush and Obama, I was sincerely moved. Sometimes the beauty of our democracy is apparent when I would least expect it, and yesterday was a wonderful example of so much of what makes our country great.  Last night, when I read that Bush and Obama had talked for nearly two hours—but without any aides, note-takers, etc.—literally alone—I was again somewhat awed by the largeness of the moment. Here were only the 43rd and soon-to-be 44th people to hold this office in the history of our country, talking in a refreshingly frank, open (and presumably off-the-record) manner.

The Monday meeting was another example of the grace with which President Bush has handled the transition so far. Bush's magnanimity here should not be surprising, though, because despite whatever faults he has, Bush should be credited for the deep, clearly genuine and emotional reverence he has always displayed for the office and institution of the presidency. It's a level of respect that I would hope all presidents would show for the office, and for the extraordinary responsibilities accompanying it.

In the wake of yesterday's meeting, however, I was disappointed in Obama when he and/or his aides leaked details of Obama's and Bush's conversation to the media. Making matters worse, the leak was done for crass political posturing, specifically about the question of whether the federal government should bail out GM or other struggling US automakers. I would think (or at least hope), that even "the One" would hold some things sacred, and that accordingly, he would maintain the confidentiality and trust that such a meeting deserves. Apparently I was wrong.

Barack Obama was not the candidate I supported in this election, but I certainly share in the celebration of our country's election of its first African-American president. Additionally I have always acknowledged what an impressive candidate Obama was, and he is clearly intelligent, remarkably articulate, and amazingly inspirational to many.  He will soon be my president too, and I wish him success. He won last week in part by promising a new kind of politics, and while I was never clear what precisely that meant, I hope this isn't the first example of it. If so, it's neither the path to success nor the way to win the support of the 57 million Americans who voted for another candidate.