The emotional, political and governmental ramifications of the recent deaths of most of Poland's leadership. 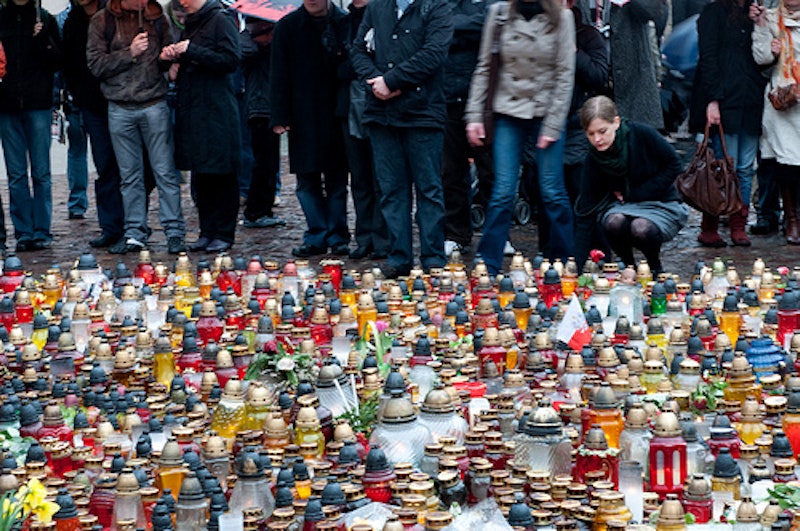 A fully empathetic understanding of Poland’s weekend tragedy overwhelms the American imagination; we simply have no analogue. Imagine, perhaps, that President Obama were to die in a plane crash en route to a Pearl Harbor remembrance ceremony in Hawaii, that the plane also contained the majority of the national Democratic leadership and 90-odd other essential government officeholders, including the chairman of the Federal Reserve, the Joint Chiefs of Staff, and top military commanders. Imagine that the heads of Japanese government were awaiting the plane’s arrival, and that our relationship with that country, rather than the friendly and generally benign one we’ve enjoyed since the end of World War II, was fraught with generations’ worth of distrust and bitterness from Japanese equivocation over the 1941 attacks, and centuries of military bullying that had stunted American cultural and political growth.

The comparison is crude, and maybe not as shattering as the reality: by nine o’clock local time Saturday morning, nearly 10 percent of the Polish government had been reduced to unidentifiable human rubble inside the foggy Smolensk forest, where, barely 20 kilometers away in Katyn, the Russian army massacred 20,000 Polish soldiers, officers and intellectuals in 1940. The very word “Katyn” is synonymous with this earlier devastation, and was the title of a 2007 film about the murders by Poland’s most revered filmmaker, Andrzej Wajda.

This event is central to both contemporary Polish identity and the country’s perennially anxious relationship with Russia; many of Saturday’s dead, including President Lech Kaczynski’s wife, had relatives and ancestors who died in the attack. And in a twist of fate so cruel it might be considered perverse in a work of fiction, Saturday’s crash occurred as the plane—itself a 20-year-old Soviet-era invention—was delivering its passengers to a ceremony at the newly opened Russian memorial to the massacre. It was to be a rare moment of solidarity between the two nations, and a much-needed one; not only has Russia historically attempted to downplay the Katyn slaughter, but the past few years have been shaky even by the standards of unease between these former bloc-mates.

Poland is quite literally devastated. A silent, candle-bearing crowd of thousands filled the lawn outside the presidential palace in Warsaw Saturday night, and the website for Gazeta Wyborcza, the country’s largest online news source, has been funeral black since the accident. The Polish people, in the words of my wife, who’s from Szczecin, are prone to lamentation in any case; when a paralyzing disaster like this actually occurs, the air of sadness could last for weeks.

The human toll and the painful setting would be enough to cripple the national mood, but consider the political consequences: Kaczynski, a socially conservative politician who nevertheless garnered respect and admiration from his enemies (one typically un-admiring Reuters journalist called him “incorruptible” after the crash), was the leader of the Law and Justice party, and a source of balance to Prime Minister Donald Tusk’s business-centric Civic Platform party. Unlike the majority of post-Soviet Polish leaders, Kaczynski was a scholarly man. A swath of special elections to replace the deceased government will be held within 60 days, and while Tusk has been barely able to contain his sorrow in public since the disaster, it stands to reason that Civic Platform, with its high public profile and bottomless coffers, will dominate them. Among Poland’s dozens of other parties, it now has few legitimate challengers. Tusk’s goals for radical government privatization, including of the health care and education systems, could conceivably go unchecked if this comes to pass.

Consider too the tenuous state of the Polish złoty, their official currency. While a member of E.U. since 2003, Poland is still years, perhaps decades, away from adopting the Euro. The złoty’s wildly inconsistent practical value was one of the first things that struck me when I first visited the country in 2006; while it spends roughly like the dollar or pound, odd exceptions pop up regularly. On one trip I purchased a scarf for 9zł., a CD for just over 20zł., and my wife bought a new paperback book for 34zł. Its exchange rate with the dollar and euro, particularly in an unstable market like today’s, also fluctuates incredibly. And now, the President of the Polish National Bank, Slawomir Skrzypek, is dead, and an unforeseen shake-up in the financial policy-making arena seems likely.

Poland’s defense department, including the head of the National Security Bureau and many top military commanders, are also gone, and at a time when Russia has been recently chest-thumping over the U.S.’s proposed missile defense shield. The country is anxious, and their leadership class has been, as some are saying, decapitated.

Russia’s historically bullying treatment towards Poland makes it hard to avoid sniffing a conspiracy in this disaster, though the likely reality—that this was merely a horrific collusion of bad weather and poor piloting—may be almost harder to take. With no villain to blame, this heavily Catholic nation can already be heard evoking the language of cruel fate: Katyn is “a cursed place,” Aleksander Kwasniewski, the new acting President, told the country’s national news. “You get chills down your spine.”
The Polish media have already deemed this “Katyn 2,” which should give us some indication of how thoroughly the national government has been truncated here. The country’s political infrastructure has been reduced to only a series of question marks, while the country’s national mood looks like what you’d expect for a long-suffering people with a hundred large funerals in their immediate future.