Is Michael Wolff Part of the Problem?

The Newser honcho recently tore in to Frank Rich, but Wolff's guilty of the same insider flaws. 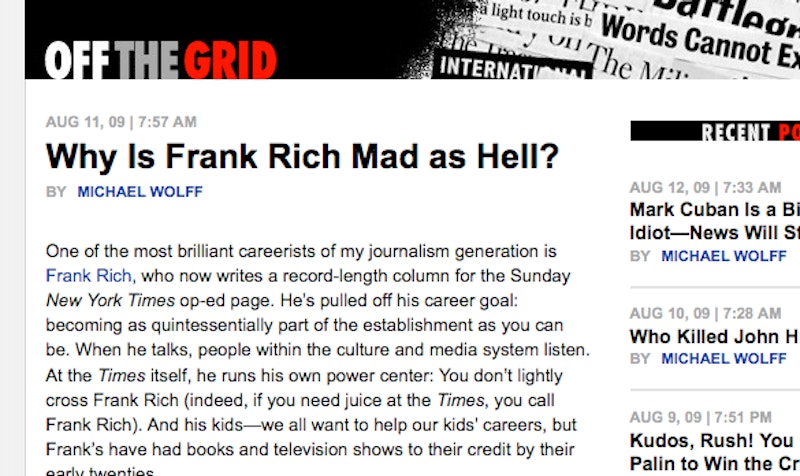 A buddy emailed me yesterday from Florida to comment on Michael Wolff’s Aug. 11 column posted on his website Newser, writing, “I’m not sure if I can figure this guy out, but he’s got huge balls to so viciously attack [New York Times op-ed pinhead] Frank Rich, not to mention his kids.” Well, yes, Wolff does have whale-sized nuts, I guess, but it’s not as if he has anything to lose by continuing, day after day, to promote his sometimes prescient, sometimes silly, prognostications on the media and business; after all, he’s a widely reviled figure in the parochial world of Manhattan journalism, whether it’s print or digital.

Wolff’s a tough egg to figure out, but I happen to like him (and have favorably reviewed his biography of Rupert Murdoch, as well as conducted an interview with him on this website), and if he wants to alienate the men and women who populate his natural social circle, it’s fine by me. Frank Rich is, to use a word that creeps into almost every Sunday Times column of his, a class-A “bloviator,” no less a dinosaur than most journalists over the age of 35, although his sense of self-worth is so grandiose that he apparently believes millions of people view his weekly sermon as a “must-read,” much like an earlier generation of politicians and intelligentsia religiously tuned into Meet the Press. It’s sort of scam, at least by my reckoning, for Rich’s natterings are nothing you can’t find on a left-wing website in triplicate nearly every hour on the hour during the week; in addition, it’s to the former Times theater critic’s everlasting disgrace that his severe snootiness led him to derisively dub Matt Drudge a “cybergossip” long after The Drudge Report became the first log-in for most working journalists.

What ticked off Wolff about Rich’s Aug. 9 essay, “Is Obama Punking Us?” was that the self-appointed Olympian, in worrying that Barack Obama increasingly appears to be, if unwittingly, part of the cabal—rather than agent of hope and change and audacity and any other caloric label you choose—that screws the American citizenry for sport and profit.

Rich wrote, typically speaking for the country: “What disturbs Americans of all ideological persuasions is the fear that almost everything, not just government, is fixed or manipulated by some powerful hidden hand, from commercial transactions as trivial as the sales of prime concert tickets to cultural forces as pervasive as the news media.”

This is all too—sorry—rich for Wolff, who responds: “It’s possible that Rich no longer regards the New York Times as part of the great corporate media-Goldman Sachs fix, a position it has surely held for the last many generations. The Times’ recent precipitous fall from establishment grace and into financial disarray might be fueling Rich’s resentment. Still, have I mentioned how last year Frank got an extra job at HBO as a ‘creative consultant’—a job in which he does… well, that’s far from clear. (Sort of a no-show patronage job in the media business.)”

So, at least by Wolff’s reasoning, that takes care of one more media celebrity that he no longer approves of. And high time! After all, it wasn’t so long ago that Wolff, in his New York magazine column, and then in Vanity Fair, would muse that a world without the Times—well, really he meant Manhattan—was unthinkable. Also, in fairness—and he’d probably fess up to this—Wolff himself, with his books and magazine essays and now Newser, isn’t so different from Rich, albeit 100 percent more entertaining and usually perceptive. For example, when some media figure rankles Wolff, he’s a really nasty piece of work, as Times business/celebrity journalist David Carr well knows. I’m not sure what transgression Carr has committed against Wolff, if any, but the Newser frontman can’t resist poking at him.

On Aug. 7, Wolff skinned Carr alive for a column the latter wrote four days earlier, an admittedly silly and overly nostalgic piece about the party Tina Brown threw to commemorate the debut of her glossy monthly Talk. Wolff wrote: “Truly, it’s astounding that anyone would even bring it up. Brown’s magazine was a clunker from the start, and her party an odd, ungainly, soulless event that everybody [meaning, of course, Wolff and anyone else who wasn’t in Brown’s favor] snickered about at the time.”

Talk was a disaster, an expensive and pretentious periodical that didn’t survive much longer than two years. However, here’s where Wolff gets on his own public relations high horse: he says that Carr’s article was really an excuse to promote Brown’s website The Daily Beast, which, of course, is a competitor of Newser. I’m not a fan of The Daily Beast—or Newser, for that matter, save Wolff’s daily column—but one might think that Mr. Iconoclast would acknowledge the bad blood between the two online ventures. So perhaps Wolff, while not nearly so myopic as Frank Rich, is also in on the “fix.”