Is Denmark Immune to History?

The precedents for disgraced imperial superpowers are many, so how have the once-violent Danes become a docile, perfectly socialized society? 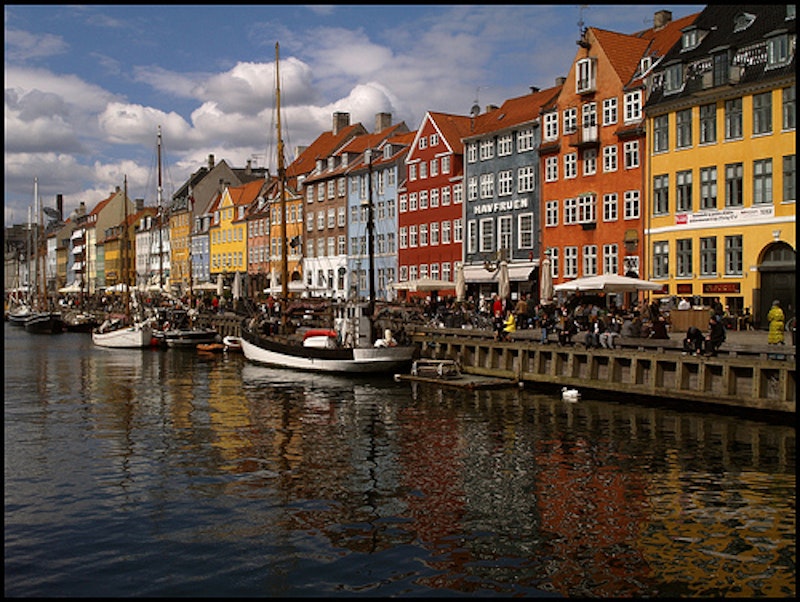 The arc of history is clear—empires expand, overreach, then decay, their martial spirit dimmed, their peoples left to recount old glories and wonder at times past. Having conquered half the world in the years before the birth of Christ, the Greeks spent two millennium beneath the boot heels of a succession of foreign powers. The descendants of Caesar's legions drink espresso and wonder why their trains never come on time. After placing western Europe beneath the Gallic yoke, the proud French people—well, the French get slagged on enough. This great meme holds particular resonance for Americans in so far as we can't help put imagine it might presage the end of our own cultural and political hegemony.

What then are we to make of the Danes? For centuries these hardy Nordic peoples spewed forth from their homeland like a river after a spring thaw, ravaging their soft southern cousins and shredding the tattered remnants of Rome. Unparalleled in war and trade, they invaded and intermingled with peoples from Britain to Russia, and later carved out an Empire that included Sweden and much of the Baltic countries. Having since lost their spoils hundreds of years ago, they ought, according to our stated algorithm of civilizational decline, spend their time in quiet repose, whiling away their short summers in the glow of a noble past.

This would in no way describe the contemporary state of the Danish people, nor of the society they have created. On a recent visit, I watched the Danes operate with a level of efficiency that makes the Japanese look like the Spanish. One-fourth of their energy comes from wind power, and in Copenhagen the harbor is so clean you can literally swim in it. Their welfare system is less a safety net than swaddling clothes, free health care shepherding each citizen from fetus to grave, and offering anyone interested in taking it a quarter-century of education with a monthly stipend. This incomparable web of social programs seems not to have greatly hindered their engagement in the world economy, in so far as one Danish Kronor is roughly equal to an American kidney. One Dane I met on the train to Copenhagen, a night janitor at a department store, told me he earns $30 an hour.

Unsurprisingly, in international surveys the Danes report themselves the happiest people on Earth.

How did this happen? How did these hardy Norsemen go from painting the bow of their dragonships with the blood of their neighbors to subsidizing what is perhaps the world's best-run welfare state? Why did their nation, after passing out of world-historical relevance, construct itself into a self-sustaining, gloriously happy retirement home?

It is easy enough to see the descendants of the Varangian guard in the Wagnerian supermen that walk down the streets of Copenhagen. The women look like they just came off a Maxim cover shoot, and the men tend to be well-trimmed and brawny, happy to take a turn at the oars should the occasion arise. But one searches in vain for the wildness, the legendary ferocity of their bearskin-clad forebears. Copenhagen is a quiet, quaint city of cool blue canals and leafy green parks. Picturesque Gothic towers dot the landscape, offering breathtaking panoramas of the town below. Idling tourists flock to the Little Mermaid statue and Tivoli park, not at all afraid that at any moment the natives of the city will carry off their women or try and sack the hotels they're staying in.

The one holdout of chaos amongst this genial order is the famed free city of Christiana. Formed in 1971 when a band of citizens effectively began squatting in a decommissioned Danish military facility, Christiana refuses to recognize governmental authority, operating under a loose set of communal regulations. Christiana has a sort of unique relationship with Copenhagen proper, in so far as  the police occasionally make an effort to clear out the anarchic pseudo-state operating within their borders, but its presence is broadly marked as a ''must do'' on the tourist maps handed out at the train station.

Effectively a small neighborhood buttressing a broad park, Christiana is about what you would expect a 30-year-old community of squatters supplemented by a small cadre of international tourists hoping to recreate Haight Ashbury to look like. Which is to say it is quite dirty, although in a generally friendly way. As the Lonely Planet guidebook I thumbed through in the train station bookstore informed me that open air drug markets no longer operate within the boundaries of Christiana, I must have hallucinated the aging hippie selling bags of marijuana from a tie-died street stand, and the dime bag I bought off him. Sitting by the side of the lake, smoking a twist of imaginary grass and watching the renegade remnants of Danish culture cycle past, one could almost imagine these pierced and tattooed Aryans raising the battleaxe high above their heads, or trading amber for slaves at the port of Itil.

But only briefly. In truth one gets the sense that Christiana is nothing more than an exhaust pipe for the perfect mechanism of Danish civilization, a happy trade off by the powers that be—''Here's your sandbox,'' they seem to be saying. ''Don't go outside it.'' And this tiny patch of untamed terrain throws the broader cultivation of the state into clear relief.

No, it seems we needn't fear the possibility of the Danes suddenly shaking off their long lethargy and spreading out to conquer and invade our home countries. Which is sort of unfortunate really, given how well they're running their own.