The 2009 Iranian presidential election will be remembered as the moment when all pie-in-the-sky social networking cliches were validated. 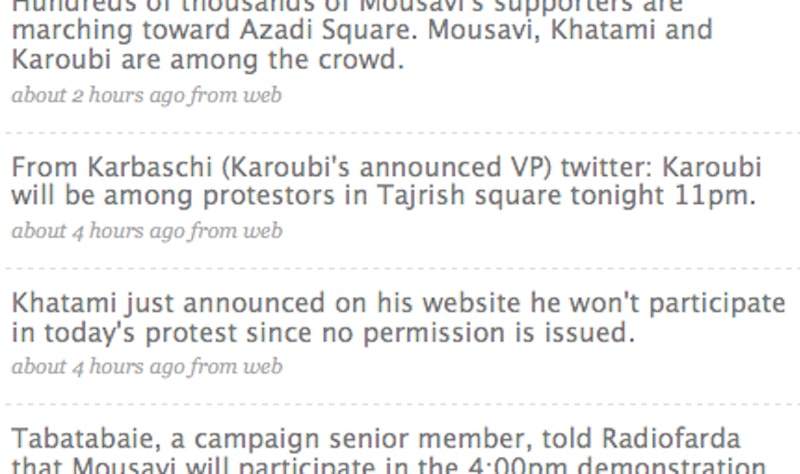 We’ve reached a new and strange point in the media culture when a Twitter topic has become an important node for criticism. The name of the topic, #CNNFail, has a somewhat surreal quality to it—I’m imagining a cat with its claws dug into Rick Sanchez’s enormous head imploring him, “Can I haz content?” But in all seriousness, #CNNFail has become something of a rallying cry for people around the globe who are incensed by CNN’s shameful coverage this weekend, which has devoted more time to Rod Blagojevich and Paris Hilton than to the fallout of the Iranian election. According to this article from The New York Times—whose admirable sense of occasion led them to dispatch their managing editor, Bill Keller, to Tehran—CNN has adjusted their coverage somewhat in response, and the #CNNFail micro-movement has simmered down overnight. But even devoting equal time to the fripperies of celebutantes as to the most significant political uprising in Iran in 30 years is shameful. Feeling pressure about the network’s conspicuous absence, CNN’s quasi-ombudsman Howard Kurtz tweeted yesterday, “I'm not getting the argument that CNN fell short on Iran. Christiane Amanpour has been there and the net has devoted hours to the story.”

True, Amanpour was shouted down by a truculent Ahmadinejad at his official press conference yesterday, but, as is increasingly the case on CNN, the story became about this small moment of interpersonal drama rather than the regime’s asphyxiation of revolt and the democratic process. CNN: First to get called out by the regime’s unstable pitchman. Far more dramatic was the report filed by John Simpson, the BBC’s most senior foreign correspondent. Their footage having been confiscated, Simpson and his team continued to film furtively in the streets, and at one point protesters created a human wall between the journalists and soldiers who were trying to cart them off. Rather than the sense of the disconnected, sanitized world surrounding Ahmadinejad you get from Amanpour’s report, from Simpson you get a visceral sense of the conditions on the ground, while a made-for-the-big-screen journalistic drama plays out simultaneously. CNN fail, indeed.

But to me, the most important journalistic work about the Iranian election has been done by bloggers and micro-bloggers on the ground in Iran and those monitoring the situation closely from far away. Andrew Sullivan is a well-known blogger for The Atlantic, but nonetheless he deserves particular credit for acting as a node for information about the situation in Iran and for critical insight into Western media coverage. Sullivan’s coverage has been relentless and generous, including dispatches from the Times, the BBC and the Guardian, but focusing on reports of violent repression of Green Movement demonstrators, widespread Denial of Service in Iranian telecommunications, and tweets from protesters and those who have given them safe places to hide. An encyclopedic digest of his coverage can be found here, and a particularly evocative YouTube video of Iranians chanting from Tehran rooftops here. Sullivan’s links have shown the multimedia richness of the Internet at its best, not to mention its nimble potential to cover rapidly changing events as they happen. His doggedly single-minded focus—akin in spirit to Marcy Wheeler’s (aka “emptywheel”) coverage of the “Scooter” Libby trial—has become the signature of the best Internet journalism. His own commentary, mostly evenhanded, has been at times a touch maudlin; I’m willing to chalk up his repetition of the jingly “Know hope” to a lack of sleep.

But when, as I wrote this piece, Sullivan posted a list of Iranian Twitter feeds and said, “This is the raw data of history, as it happens,” for the first time I am not embarrassed to think this to be the case. Blogs, social media and Twitter have an exceptional capacity for being inane. But clearly so do CNN and the Times—the former’s coverage and attitude are irredeemable, but Keller’s dispatches in the latter have begun to counterbalance his wonky performance on The Daily Show. (He has a long way to go, though, to reclaim credibility for the Times’ shameful insistence on using the euphemism “intense interrogation” for the Bush administration’s torture policies.) But in the face of overwhelming, quick-changing events in Iran this weekend, smart bloggers like Sullivan have shown that the Internet can be a new version of what the BBC World Service and Voice of America were during the fall of the Soviet Union: a lifeline connecting the world to history as it happens.