Increased Employment is the Common Denominator in Politics Today

Whether it’s the party of hope (Democrats) or the party of nope (Republicans) in control, Americans and Marylanders simply want more jobs. 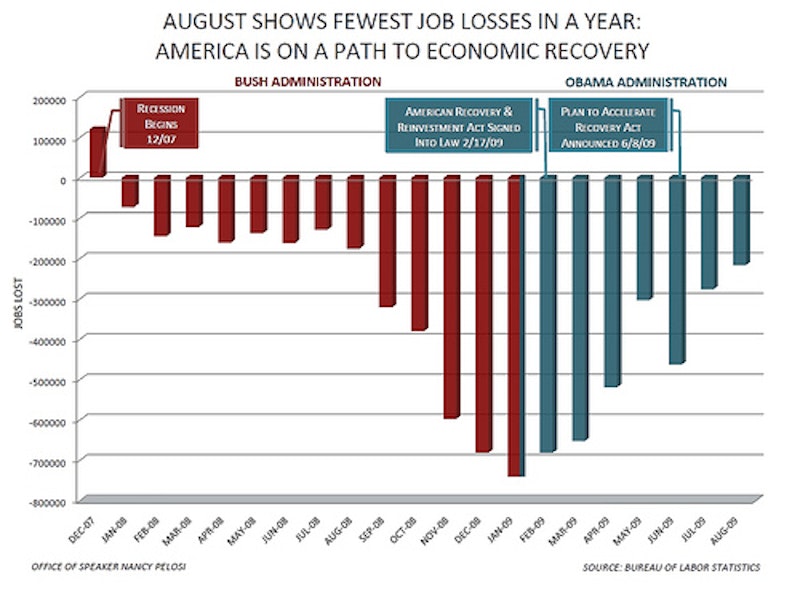 The state of the union is the state of the state. And in the joyous jumble that is politics, Maryland is lately sounding like Washington’s echo chamber. President Barack Obama says jobs, jobs, jobs. And Gov. Martin O’Malley’s mouth moves in unison.

Ditto the opposition party, the party of hope vs. the party of nope. The Republican party’s response to Obama’s speech was its usual one-size-fits-all cure for what ails us—tax cuts. In Maryland, the GOP’s talking-points response was pretty much the same as Washington’s—cut taxes and whittle the budget.

Hear the president: “That is why jobs must be our number one focus in 2010, and that is why I am calling for a new jobs bill tonight,” Obama said in his state of the union speech. “We can put Americans to work today building the infrastructure of tomorrow. From the first railroads to the Interstate Highway system, our nation has always been built to compete. There is no reason Europe or China should have the fastest trains, or the new factories that manufacture clean energy products.”

Rewind to O’Malley: “I’m asking you to create jobs through major investments in this year’s proposed capital budget—rebuilding schools, rebuilding roads and water infrastructure, rebuilding community colleges and science labs,” O’Malley said in his state of the state speech. “This recession will end,” O’Malley said, adding a glimmer of hope. “Our journey is not over. And our best days are still in front of us, if we make it so."

And here comes the blowback: “Words aren’t going to solve this problem,” Sen. Allen H. Kittleman said in rebuttal to O’Malley. “A good speech isn’t going to make the people of Maryland have jobs tomorrow.” That was Kittleman riffing off House Minority Leader John Boehner (R-Ohio), the Congressman with the eternal spray-on tan, and Virginia Gov. Bob McDonnell (R), who delivered the Republican response to Obama’s speech. McDonnell was chosen, Boehner said, because of his innovative ideas to create jobs for Virginians. Even former Gov. Robert L. Ehrlich Jr. (R) has a severe case of echolalia. He criticized O’Malley’s business tax credit proposal and called for—what else?—a cut in Maryland’s corporate tax.

But in delivering the response to O’Malley’s speech, Kittleman, the Senate minority leader from Howard County, inserted a bit of revisionist history into his rant. He linked Maryland and Massachusetts as two states that have been dominated by one party for more than 40 years. That’s news to historians and political rubberneckers. In the past 40 years, Massachusetts has been far from the personal property of Democrats. The state has had five Republican governors and four Democrats, including the two staggered terms of Michael Dukakis, as well as the incumbent Democrat, Deval Patrick.

So in the new politics of hope and nope, it all comes down to this. The difference between Democrats and Republicans can be reduced to personal pronouns. When Democrats speak, they say “we” and “us.” And when Republicans talk, they say “I” and “me.”

Jobs are the primal scream and the visceral populism of the new decade. When Obama and O’Malley addressed their constituents in separate but symmetrical speeches, there were big inclusive embraces to get the country and the state moving again by creating millions of jobs and providing loans and subsidies for small businesses as employment incubators. At the very base of the Democratic approach is the novel idea of reinventing America’s and Maryland’s economies by creating entire new industries to replace the vanished and the out-sourced. To underline the point, Obama visited Maryland on two successive Fridays to promote job growth, once in Baltimore and again in Lanham.

Republicans, by contrast, are protectionist by nature and conservationist in policy. They protect their own and conserve the worst aspects of capitalism. They are as American as money and beholden to those interests that provide it. The Supreme Court’s recent ruling on unlimited corporate campaign contributions is their new political love song. And the GOP’s precincts embrace Wall Street, the insurance companies and big banks. Why, Republican senators even voted unanimously to oppose their own resolution to create a bi-partisan budget deficit study commission simply to tuck it to Obama. And they’re making a mad dash to incorporate the angry teabagger movement into the party’s official structure without considering that the teabaggers cost the GOP the upstate New York Congressional seat they had controlled for more than a century. And Republicans accuse Democrats of class warfare?

Recent studies show that cutting taxes does not stimulate growth, as Republicans claim. President George W. Bush cut taxes twice, in 2002 and 2003. And his eight years in office resulted in the lowest rate of growth of any eight year period since World War II. And President Ronald Reagan’s tax cut, though it benefited the wealthy, resulted in high unemployment and the largest budget deficit on record at the time.

The reverse of the medal is also instructive. In 1930, President Herbert Hoover raised taxes dramatically at the height of the Depression, and President Franklin Roosevelt later compounded the damage by raising marginal rates as high as 90 percent, both adding to the economic calamity of the era.

The background noise to the speeches is that both parties at the national and state levels face serious and uncertain elections this year. The public is in an angry and unforgiving mood, not just at any one party but at all politicians because of the intransigence in Washington and the inability to get anything done. And in Maryland, the ripples out of Washington are always felt first.

Nationally, Democrats enter the mid-term elections with a string of embarrassing losses in New Jersey, Virginia and Massachusetts and the knowledge that history predicts that the party in power will lose additional seats in Congress because that’s what happens in off-year elections. In Maryland, it’s becoming increasingly apparent that O’Malley will have a tough re-match against Ehrlich, whom he defeated in 2006 by six percentage points. Recent polls show O’Malley with a nine point advantage, but Ehrlich claims his private polling shows that O’Malley has high negative ratings.

But to visualize an election pattern between Maryland and Massachusetts, as Kittleman did, is foolhardy and unwise preparation for a campaign. The black population of Massachusetts is four percent; Maryland’s black population is 33 percent. Maryland has roughly 400,000 union members, all of whom will benefit from the Democratic jobs programs. And finally, 26 percent of the workforce in Maryland is employed by some level of government—federal, state or local. Those three constituencies make up the vote-solid base of the Maryland Democratic party up and down the I-95 corridor.

Politics and economics toddle hand in hand. The fungible prose is understandable, even across party lines, although their approaches and rhetoric differ dramatically as do their economics. For the strengths of a democracy are also its weaknesses. But if there’s one thing that unites America despite its diversity and differences it is the innate drive to pay bills and feed families, the will to work and the drive to succeed. Thus, the speeches may be lofty or mundane, the prose may be lyrical or pedestrian, and the approach may be smarmy or shrill, but they all indicate one thing: Politics is about connectivity. And job creation is this year’s theme of the common man as well as the election year’s common denominator.