I Know Why The Caged Bird Kvetches

Obama did more than break down barriers for African-Americans; he proved that you don't have to be an upper-class white Protestant man to be president. 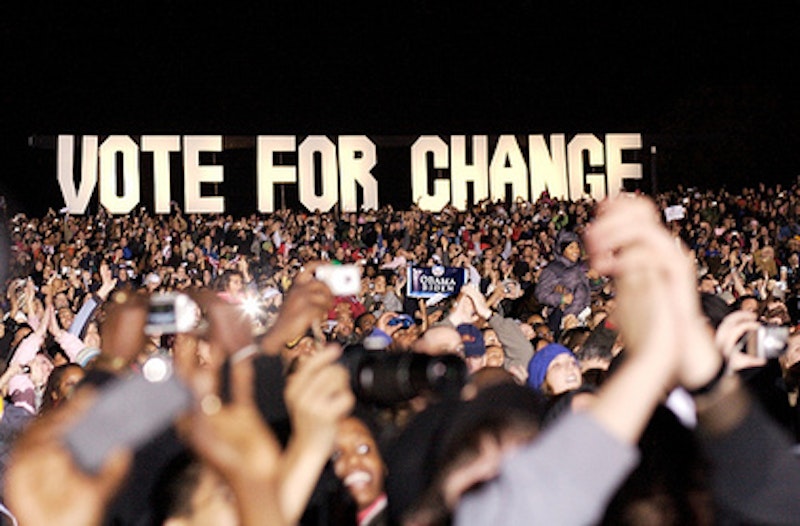 A couple of months ago, I spent a week preparing a rage-and sorrow-filled column decrying John McCain’s victory over Barack Obama. For the next six weeks, ideas and phrases were added and subtracted, resulting in a ready-made article about disillusionment and the American dream. By Monday, I had already forgotten everything in it and was planning a really interesting essay about recycling.

Fortunately for all of us, something happened on Tuesday night, and recycling will have to wait a week. Yes, yes, Obama won the election, and as a matter of duty this column—written within 24 hours of the victory—really ought to be about such a significant moment in history. But everyone else has been talking about it and this recycling thing seemed such a unique decision, a step beyond the past and into the future, if you will.

Then, in the wee hours of Tuesday night/Wednesday morning after everyone else had gone to bed, something momentous happened. At around 2 a.m., CNN put on an election recap montage that ended with its “Barack Obama, President-Elect” graphic. And when the graphic came up, well, uh, I cried. I’m talking about tissue-to-dab-your-eyes-and-cheeks tears mixed with puffy red eyes and a runny nose. It only lasted a few minutes, but damn. Even a day later, let’s just say it got a little dusty in the apartment while I was reading countless articles about the victory.

This is rather abnormal behavior on my part. You could count on one hand the amount of times I’ve cried in the past several years. It probably averages out to about once a year, but you have to remember that of those five or so times, two have been Michigan football-related and once was because I watched Field of Dreams (which will make me cry every single time I watch it). If you’re into crying, that’s all good, but my emotional composition ranges from “chatterbox elated” on one end to “basically a robot without empathy or human-being-like compassion” on the other. Getting a grip on emotions has never been that difficult, because, frankly, there aren’t really that many emotions to wrangle. Things that will provoke tears could basically be reduced to the following themes: Michigan football, the Baltimore Orioles winning the World Series, Field of Dreams, and gunshot wounds.

You can imagine the shock of feeling that first tear well up and tumble out of its duct. I was completely unprepared for this. The victory and follow-up speech had incited extreme relief and certainly jubilation, but I had not felt even close to emotional the entire night. It was cool, it was amazing, it was historic, but it wasn’t a tearjerker. Obama’s speech had nothing on Kevin Costner “having a catch” with his pop or even Archie “Moonlight” Graham crossing the first base line.

Now, I am white. I am upper-middle-class and came from a nice suburb. I went to a good public high school and a fine university. My background has virtually guaranteed success. For so many people, Obama represents the ideal that someone without my insanely lucky background can succeed. On an intellectual level, that makes me incredibly happy, but it doesn’t inspire an emotional breakdown because, frankly, it would feel odd to co-opt the sentiments of a group of people whose struggles are not mine and whose experience I can never fully understand.

Since I was a little boy, my parents have always told me I could be anything I wanted. They still do. This is America, where my last name is irrelevant. I can do what I want and it doesn’t matter who my parents or grandparents or great-grandparents were. But I realized along the way that my last name was in fact a barrier. I could never under any circumstance—no matter how qualified I was—be the president. Neither could my children, their children, their children’s children, and so on. This is because I am Jewish and so is my last name.

To a degree, this doesn’t affect day-to-day life all that much. Frankly, the presidency is just about the only thing I can’t attain as a Jewish person. On the surface, I am still a part of the majority and receive the unspoken benefits of being such (getting cabs in New York, the ability to drive through most major cities without raising suspicion, the unfortunately natural comfort of being surrounded by people who look like you almost all the time). The job of president is the ultimate aspiration in the United States, one that I probably wasn’t going to achieve no matter what my last name is. But once I was old enough to understand politics, I realized how important Christianity was in a candidate, what a huge deal it was on the campaign trail and to so many people in our nation. No non-Christian could ever win the presidency. Shit, Catholics can barely get elected (we’ve only had one, John F. Kennedy, and he was assassinated).

When you see what limitations you have based on birth—not who you are, not what you can do, not what you’ve done—you start to worry that you may not be as much a part of this country as you like to tell yourself. The whole “You will never be President because you are a Jew even though we will never say it aloud” thing shows you that a majority of people don’t consider you a real part of the national fabric. It is much stronger, much more hurtful proof than Sarah Palin’s divisive comments to the same effect.

For my whole life, I have always identified with my American-ness much more than anything else, including my Jewish-ness. So to be reminded that those categorizations are occasionally at odds, to have that faith appear misplaced is a jarring aspect of being a Jewish-American that I like to forget.

If I consider myself an American but history indicates I could never ascend to the country’s highest office, do I still get to be an American? Am I betraying myself by attaching my sense of who I am to an institution that hasn’t yet entrusted its greatest powers to a Jewish person? Am I betraying my Jewish heritage? Can I be Jewish and American? These questions shouldn’t have to be raised, but the election nonetheless reminded me of my limitations. Because, really, being Jewish doesn’t hold me back. You know, except when it does.

Honestly, anti-Semitism is little more than a specter in America. America is the safest place for Jews in the world (unfortunately including Israel). No other nation—save Israel, of course—has truly accepted us as its own. One barrier—and it really is just the one—doesn’t make bigots of an entire nation. When I hear some people talk about anti-Semitism in America, I tell them they are paranoid idiots. But I have trouble negotiating the feeling that America truly accepts me as an American with this other, latent discomfort that I usually tuck away without thought. The discrimination is there, it is a part of the world, but it’s not my world, at least the world I like to think exists. So what the hell do I make of this mess?

Therein lays the essence of American-ness. It is the struggle between the majority, made of white Christians, and the ideological foundation of a free, religion-less, race-less nation. It is the fact that nowhere else on earth brings their immigrants—and especially immigrants’ children—into society as fully and naturally as America, matched with the symbolism of that wall we’re building down south. It is our slave-owning past, still-racist present and the fact that we just elected a black president.

Barack Obama is not like me, and he is not like you. He is unlike almost everyone in the United States. And we elected him because he was the best choice. And I cried.