"I Have Private Pain Every Day"

Maureen Dowd inadvertently makes me appreciate Twitter, mainly by virtue of its creators not being Maureen Dowd. 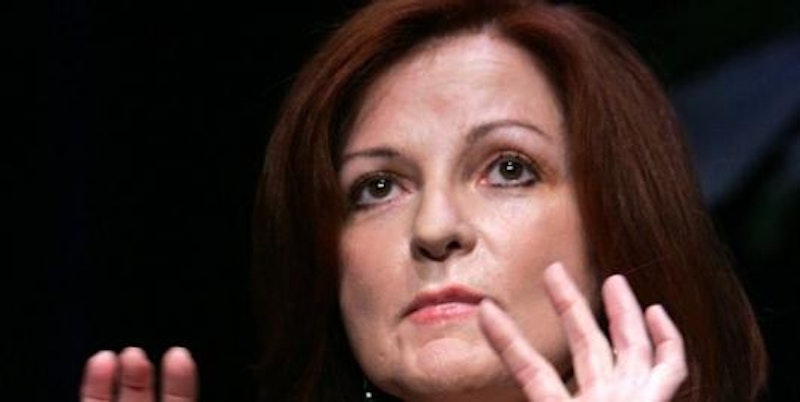 Since her Seinfeld-meets-Liz-Smith journalistic style is so well tailored to it, it’s surprising that Maureen Dowd took this long to address Twitter in her twice-weekly New York Times column. Start with a little “What’s the deal with Twitter?” patter, make a few mentions of the political and Hollywood celebrities you know who tweet, comment on the banality of the medium as if you’re the first person to ever make the observation… Dowd’s column basically writes itself.

But I’m glad she went the interview route for her Wednesday piece, since giving up some of her op-ed inches to other peoples’ words meant Dowd was hoisted by her own asinine petard for all of us to see. The banality of Twitter is so self-evident that the program is virtually immune to insult, but every time Dowd tried to lay blame at its creators’ feet for hastening the decline of western civilization, the two men come off looking like paragons of common sense. In trying to chastise a supposedly juvenile tool for the self-absorbed, 57-year-old Dowd comes of looking like the spiteful teenager.

Such a pose is of course nothing new for Dowd, whose writing is consistently the most self-obsessed and least serious political commentary in the Times, but her Twitter interview is noteworthy for both the columnist’s hamfistedness and her utter failure to prove an easy point. Dowd begins by entering the Twitter headquarters in San Francisco, a place that “Alfred Hitchcock would have loved” because there are birds painted all over the place. (Because he directed The Birds, see.) “I was here on a simple quest: curious to know if the inventors of Twitter were as annoying as their invention,” she announces ungrammatically. That’s Dowd’s lede—she thinks Twitter is annoying. So much so that it warrants a trip to California to take its makers to task.

They defend themselves ably. Not that it’s difficult to deflect criticisms like Dowd’s first one: “Twitter seems like telegrams without the news. We now know that on the president’s trip to Trinidad, ABC News’s Jake Tapper’s shower was spewing brown water. Is there any thought that doesn’t need to be published?”

To which Biz Stone replies, dignity in tact: “The one I’m thinking right now.”

Dowd then accuses them of marketing a silly toy to “bored celebrities and high-school girls,” as if, were that true, those people don’t deserve their own moments of entertainment. “What do you think about the backlash to Twitter on the blogs?” Dowd keeps going, “Isn’t that a bit like the pot calling the kettle black?” ZING! (Because blogs are as ridiculous [read: non-paper] as Twitter, see.) The well-informed, hard-hitting questions keep coming:

“Why did you call the company Twitter instead of Clutter?”
“Would Shakespeare have tweeted?”
“Was there anything in your childhood that led you to want to destroy civilization as we know it?”
“I would rather be tied up to stakes in the Kalahari Desert, have honey poured over me and red ants eat out my eyes than open a Twitter account. Is there anything you can say to change my mind?”

Dowd’s faux-jokey tone (and the fact that she admits up front that the two inventors were “charming”) belies the obvious point that she really hates Twitter. Why that is, other than its perceived annoyance, is unclear. And like Dowd, I share the kneejerk opinion that Twitter is unnecessary, even silly—at least I did before inventor Evan Williams put all that kneejerking in its place in response to Dowd’s question, “I heard about a woman who tweeted her father’s funeral. Whatever happened to private pain?”

“I have private pain every day,” Williams replied. This statement, both because of the article’s droll sentence-for-sentence interview format and because it was the first thing the heretofore nondescript Williams said during the Q&A, has an almost Beckett-like emotional intensity. Here, in a simultaneously tragic and hilarious six-word sentence, is the essence of why this entire article is ridiculous: Twitter has no bearing on your life unless you allow it to. Maybe Dowd, whose longtime industry is being transformed by this kind of instant, unedited communication, has a right to more annoyance than most. But here’s a thought: Get over it.

Perhaps criticizing Dowd is as lame as criticizing Twitter; both are easily ignorable, fundamentally unserious, and inexplicably successful. But the facts are that Dowd’s got a Pulitzer and a shelf of other journalism awards. Twice a week, she occupies the most valued op-ed real estate in the English-speaking world. She has resources unlike almost any other writer in the business. You’d expect that, if such a person were to interview the two inventors of a new communications program that’s altered the way we perceive public figures and receive information, she might come up with something more interesting than “Why are you so obnoxious?” But then that’s probably why she’s so scared of being replaced by machines.