How to Blow a Scoop

Did politics blind the national press on the Palin hacking story? 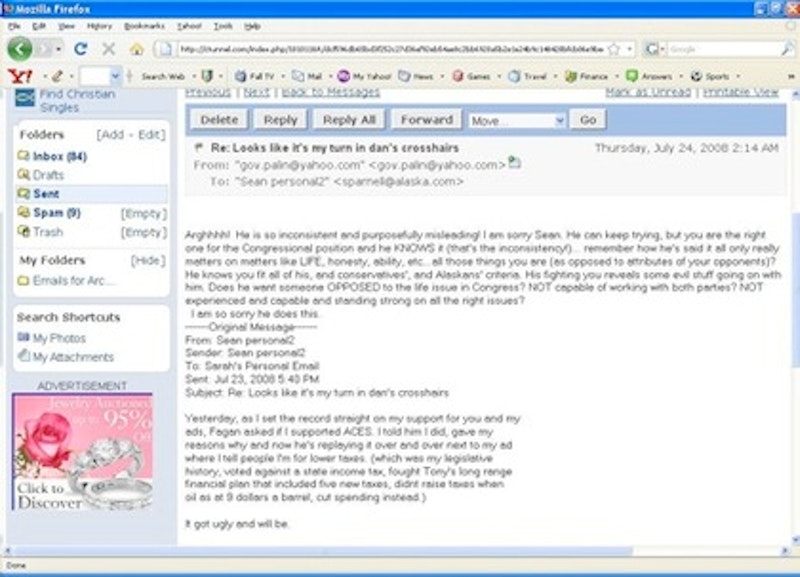 Scandal, crime, politics—the story had nearly all the makings of a blockbuster, a surefire Drudge link, no less. So why did it seem that nobody in big-time journalism wanted to report it?

At about 4 a.m. on Sept. 16, images of e-mails from Alaska Gov. Sarah Palin’s private Yahoo account were posted to a bulletin board on the site 4Chan.org. The pilfered e-mails were posted by someone with the nickname “rubico,” whose account was linked to the address rubico10@yahoo.com.

The first news accounts of this hacking were published Wednesday, Sept. 17, after “rubico” returned to the bulletin board to explain how he had accessed Palin’s emails, saying he had hoped to find something “incriminating . . . that would derail her campaign,” but was disappointed.

For two days, the hacking generated extensive news coverage, because Palin’s use of Yahoo e-mail was related to complaints about her conduct as governor, including a dispute with former supporter Andree McLeod that had been reported in the Sept. 10 edition of The Washington Post.

As Post staff writers Michael D. Shear and Karl Vick reported on Sept. 18, a group of hackers said they had published the Palin emails “to expose what appeared to be her use of a personal account for government business.” Yet as “rubico” himself said, the hacked Yahoo account apparently contained nothing scandalous at all.

The initial flood of coverage of the Palin email saga soon slowed to a trickle, however, even as new and shocking information about the case was revealed. Why? Instead of revelations about a Republican scandal, the story’s focus quickly shifted to a federal crime investigation with a Democratic suspect. The major media’s interest evaporated just as quickly.

Even as reporters were rubbing their hands with glee over the hacked emails—which were soon posted at Gawker and other Web sites—conservative bloggers were on the trail of “rubico.” By the evening of Sept. 17, at least one blogger had identified a “rubico10” in Memphis, and by the morning of Sept. 18, several other blogs had zeroed in on the same individual: David Kernell, 20-year-old son of Tennessee state Rep. Mike Kernell, a Democrat from Memphis.

Much circumstantial evidence pointed to the younger Kernell. The earliest “rubico” postings online, which dated back to 2003, identified him as a chess enthusiast, and other information on the Web confirmed that David Kernell had won chess tournaments in his youth. On his Facebook page, he listed his politics as “Obamacrat.” One obvious clue was the common word to which “rubico” had re-set Palin’s Yahoo password: “popcorn.” Kernell = popcorn kernel.

The blog buzz reached reporters around Tennessee and, by the evening of Sept. 18, The Nashville Tennessean, Memphis radio talk show host Mike Fleming, and TV stations in Nashville, Knoxville and Memphis were all reporting the name of the suspected hacker, who is an economics major at the University of Tennessee. His politician father spent that evening in his office fielding phone calls about the case.

At 10:20 p.m. Sept. 18, Trevor Aaronson of The Memphis Commercial Appeal posted a story in which an agent in the FBI’s Memphis office confirmed that his office had been asked by the bureau’s Anchorage office to assist in the investigation.

Local media were all over the story but, with the exception of The Washington Times, no news organizations outside Tennessee followed the hacking story in the three days after David Kernell’s name surfaced in connection with the case.

Why? Because the crime of hacking Palin’s email lacked the political angle that had originally interested reporters. The Associated Press had assigned to the story Ted Bridis, who leads the AP’s “multimedia investigative team,” and Bridis wrote of the hacking: “The disclosure Wednesday raises new questions about the propriety of the Palin administration's use of nongovernment e-mail accounts ...” Bridis also reported that the AP refused to comply with a Secret Service request for copies of the hacked emails.

When a reader sent an email to Bridis asking about this, Bridis replied: “If Gov. Palin hadn’t been using a consumer-level Yahoo! account (more than one, actually) this crime wouldn’t have happened because the hacker exploited the service’s ‘forgot-my-password’ mechanism, which is inherently insecure.”

In other words, the AP reporter blamed the victim, not the criminal, and that attitude was apparently widespread among the press corps, which couldn’t be bothered to report the story then developing in Tennessee, as evidence mounted that Kernell was indeed the object of a federal investigation.

Meanwhile, bloggers who had identified “rubico” as David Kernell—including Michelle Malkin—were accused on Sept. 19 by The Los Angeles Times of staging a “virtual lynching” of the Tennessee student. Even after it was reported that the FBI served a search warrant on Kernell’s apartment early Sunday morning, The Washington Post’s reaction was merely to sneer that “the blogosphere—especially right wing bloggers—has been cock-a-hoop about the possibility that the hacker in question is Kernell and the action was engineered by the Democratic Party.”

Yet Malkin never asserted that the hacking was “engineered by the Democratic Party” and—unlike the conspiratorial suspicions of some reporters that the mere existence of Palin’s Yahoo account was proof that something shady was afoot—most “right-wing bloggers” were content to let the facts speak for themselves: A self-described “Obamacrat” whose father is a Democratic politician had apparently hacked the Republican running mate’s email account in search of something that might “derail her campaign.”

“Apparently” being the operative word here. Federal investigators are being very closed-mouthed about what’s going on in the hacking probe. Last Monday morning, disgusted by the way the media was ignoring this developing story, I did what any other journalist could have done: I called the public-affairs office at the Justice Department and asked about the case. Department spokeswoman Laura Sweeney confirmed that “investigative activity” had taken place in Knoxville over the weekend, but couldn’t say much more than that.

That was enough, however, for a tidbit of a news update. Shortly thereafter, Associated Press reporter Lara Jakes Jordan filed the first major national news story about the investigation of Kernell. The first, and quite possibly the last.

The next day, when a grand jury in Knoxville heard testimony in the case, national news organizations ignored it. I compiled a brief account based on reporting by Tennessee-based media, but other reports are essentially nonexistent.