Memorial Day forces us to think about soldiers who fought in the past, but plenty of current soldiers need our thoughts and support now. 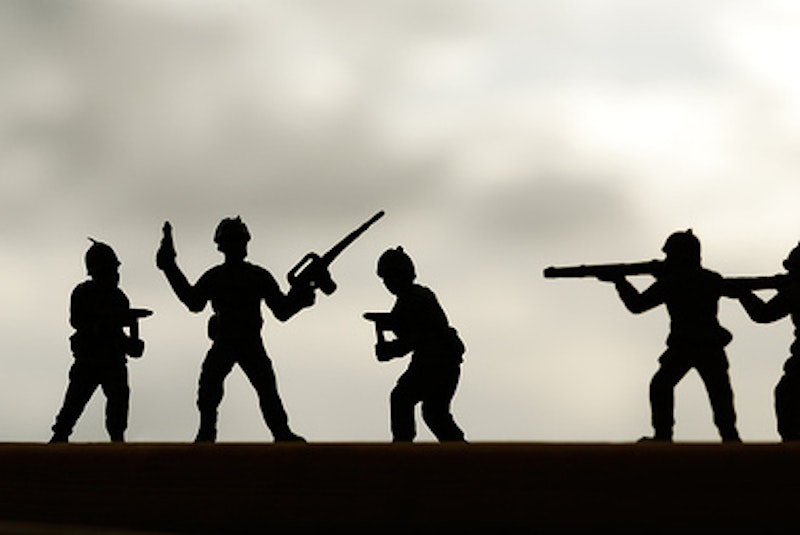 Photo by Kyle May

Memorial Day is technically a day on which we honor those men and women who have died in service to our country. We ought to use it—and every other day for that matter—to think about all of those who have served our country, living and dead, as well as those who in the military today.

Last week I traveled south for business. I flew into Atlanta, as I have many times in the last several years, and was again blown away by what I see every single time the escalator arrives at the baggage claim area: dozens of people with signs, flags and banners, there to welcome and celebrate any and every member of our armed services arriving home for what the banners call “Operation R & R.”  Think about this for a minute. These are men and women who have taken time out of their own lives to help those soldiers, sailors and marines who are arriving for leave feel welcome and, perhaps more importantly, appreciated.

Several days later, I was set to return home, and was on a flight out of Pensacola, Florida. On my flight were six active duty sailors, all dressed impeccably in their white uniforms. I should have spoken to the young men, asked them where they were headed or where they were coming from, or at the very least, thanked them for their service. I didn’t, however, instead focusing on what I then deemed to be a crucial email on my Blackberry. When we landed, the flight attendant set us all straight when, upon making her arrival comments over the PA system, she pointed out the sailors, and on behalf of herself and the crew, thanked them for their service. This prompted a round of applause from the passengers, an appropriate gesture if somewhat tepid.

Last weekend in New York City, it was Fleet Week, the annual event in several cities around the country when one or more military ships docks for the weekend.  The sailors are then allowed to disembark and enjoy a few days of fun around the town, and residents of the city are in turn encouraged to tour the ships visiting. Naturally I saw several sailors around the city throughout the weekend, again, all sharply dressed in their whites. I should have learned my lesson from the airplane last week and made a point of at the very least thanking these men and women for serving our country, but for some reason, I didn’t, and I imagine in not speaking to them, I am among the vast majority of New Yorkers, and that’s wrong.

For the record, I happen to be a supporter of the wars in Iraq and Afghanistan.  While I certainly don’t believe the conflicts have been perfectly waged or that the administration is without fault, I remain, in this case, in the minority in terms of my belief that we are doing the right thing and should continue to do so. I recognize, though, that the majority of Americans do not want the wars to continue, and many are angry at the Bush administration and others for the way we entered these wars, and for how the conflicts have been handled since. Regardless of one’s view of why and how these wars began, they are the reality now—they are happening, and we are in them. Because they are happening, hundreds of thousands of men and women like you and me are spending months and in some cases years halfway around the world fighting on behalf of the United States. These sailors, soldiers and Marines are husbands and wives, fathers and mothers, brothers and sisters. Many have careers in the private sector that they left when called up for service. These brave members of the armed forces did not have anything to do with why or how we got into the wars, or even with how the wars have been handled since. They are simply following orders, putting their lives in jeopardy on a daily basis.

Regardless of one’s view of the wars, or the leaders who brought us into these conflicts, the military operations in Iraq and Afghanistan are happening, and we are in them. So on this Memorial Day, I committed myself to make sure I took those extra 30 seconds to thank a young sailor or soldier, whether I saw them on an airplane, the streets of Manhattan, or elsewhere—today, and for as long as our presence there continues. I would respectfully ask anyone who reads this to do the same. If you’re opposed to the wars, set aside those political differences and that anger in the presence of a member of the armed services. Remember, after all, they did not choose to fight these wars and they bear no responsibility for our being there. Without question, they deserve our appreciation and respect, and the time and effort it takes us to show them that courtesy is far less time and effort than they are spending in service to our country