With back-to-back conventions effectively cancelling out any potential bounce in the polls, the candidate’s VP choices will be even more important in breaking the current tie. 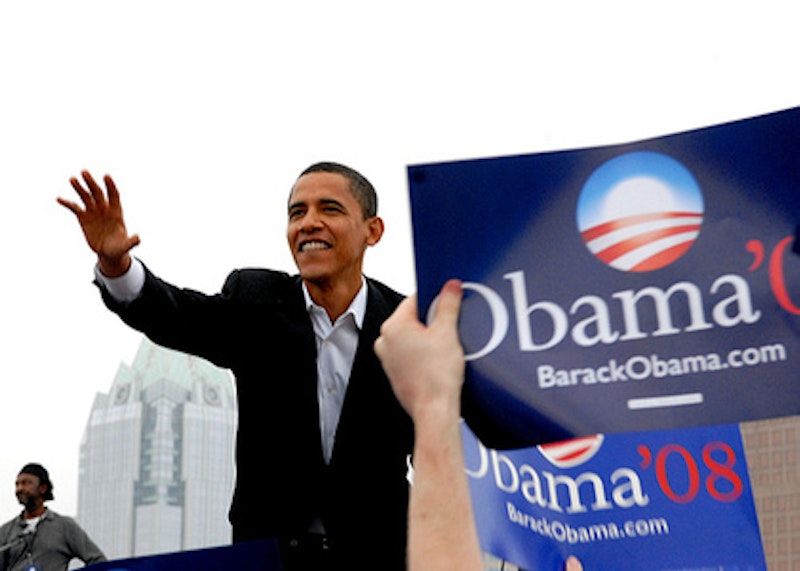 As the nation finally enters the homestretch of the 2008 campaign, Barack Obama should probably have a 5-to-10-point lead in the polls, but instead finds himself effectively tied with John McCain. In generic poll after generic poll, Democrats are decisively favored over Republicans, yet for some reason, Obama lags. The Obama campaign knows this, and its anxiety has started to show. In choosing Sen. Joe Biden as his running mate, Obama made a tacit admission that a bolstering of his experience and qualifications—particularly with regard to foreign policy—was necessary. Biden is not likely to do any harm for Obama’s chances, particularly given that I would expect the Obama team to have him speak only on a scripted basis to avoid his propensity to put his foot in his mouth. On the other hand, it’s difficult to make the argument that choosing Biden will help much either. Will a president and vice president who are both sitting senators—one for 35 years—really represent a departure from the “same old Washington politics”?

McCain made a colossal mistake last week. In his defense, if one took the time to try and understand the reason he couldn’t answer the  “housing question”—that there are properties owned by his wife’s family trust of which he may not be aware and probably cannot actually be considered an owner—it becomes easier to understand his hesitation or inability to respond. Unfortunately for McCain, no one is going to take that time. The national media certainly won’t, though were Obama to commit a similar mistake I feel confident his fourth estate admirers would quickly come to his rescue. Regardless of the nuances or complexities that led to his non-answer, it’s been established that John McCain is so “rich” and so “out of touch” that he cannot even keep track of how many houses he and his wife have.

Meanwhile, back at the Democratic Convention, Monday night was initially billed as Michelle Obama’s time to shine. This changed slightly when Ted Kennedy opted to make the trip to Denver and address the throng. It is truly sad that Kennedy is gravely ill with cancer, but can the Democratic Party and the media spare me some of the sycophantic coverage of the “heroic” Kennedy making the “courageous” journey “against the doctors’ advice” to “summon the strength” to speak in order to symbolically “pass the torch” to Obama? I couldn’t help but wonder if Chris Matthews was aware of the irony when he said on MSNBC Monday night: “He’s a sentimental guy, whatever you think of Ted Kennedy, and he looks out for other people.” Really? What about Mary Jo Kopechne?

On the subject of Democratic political giants prone to moral failings, when Bill Clinton addresses the convention on Wednesday night, many in the Obama camp will be watching nervously to see just how warm or sincere he seems in his support of Obama. Already controversy has surfaced over the former president’s reported displeasure at being scheduled to speak on a night the DNC has themed “Securing America’s Future.” Apparently “The Man from Hope” would much rather speak on economic issues and is bitter about a missed opportunity to do what he loves most: talk about himself. Obviously Clinton believes the economic strength of the 1990s is his best chance for a lasting legacy not involving the name Monica, and it’s a safe bet that the narcissist-in-chief will say as little about Obama as he thinks he can get away with. I remain puzzled that Obama did not dispatch with both Clintons on the convention’s first night, much as McCain is smartly doing with President Bush and Vice President Cheney on Day One of the GOP Convention. The Clintons pose a real threat to distract from one of the Obama campaign’s best opportunities to introduce their candidate to the nation on their terms.

Looking ahead to Thursday night, Obama is slated for his own star turn. I predict that, like his “premature victory lap” in Europe, the Obama campaign may come to regret sensationalizing and over-hyping the most important speech any candidate ever gives in the course of a presidential campaign by using Invesco Field so that “the One” can make his acceptance speech in front of 75,000 adoring disciples. American voters get it by now. We understand that people literally faint at his rallies, that it’s “cool” to support Obama, and even a Republican like me can’t help but find the Illinois Senator very likeable at times on the surface. What American voters may not get, however, is precisely what is in store for us if Obama becomes president. It seems unlikely we’ll learn much more on Thursday: a speech in an outdoor stadium to such an enormous crowd is not a setting that lends itself to a serious and sober discussion of what specifically Obama plans to do as president.

McCain needs a game-changer VP pick to break the tie and build a legitimate lead over Obama, and he has a remarkable opportunity for just that after Obama’s bland, status quo choice of Biden. Multi-millionaire Mitt Romney was effectively eliminated after the “how many houses” gaffe, but McCain’s misstep boosts Minnesota Gov. Tim Pawlenty’s chances given his bona fide blue collar background. Pawlenty, however, represents the GOP equivalent of Biden; he’ll do no harm, but it’s not clear he’ll help much either. McCain can fundamentally alter this race and gain back his lost momentum with a bold and surprising veep choice, particularly in going with a woman after Obama disappointed the Hillary supporters by not choosing her. Unfortunately for McCain, there is no Republican female who perfectly fits the bill, but there are a few names to keep in mind: Alaska Gov. Sarah Palin; Connecticut Gov. Jodi Rell; Texas Sen. Kay Bailey Hutchison; Tennessee Congresswoman Marsha Blackburn; Secretary of State Condoleezza Rice; former Hewlett-Packard CEO Carly Fiorina; and former eBay CEO Meg Whitman. Each has pros and cons, but unlike Obama, McCain’s vast experience affords him more leeway to swing for the fences in selecting his running mate. If he wants to win in November, he may have to do just that.