An odd experience in the world's holiest city. 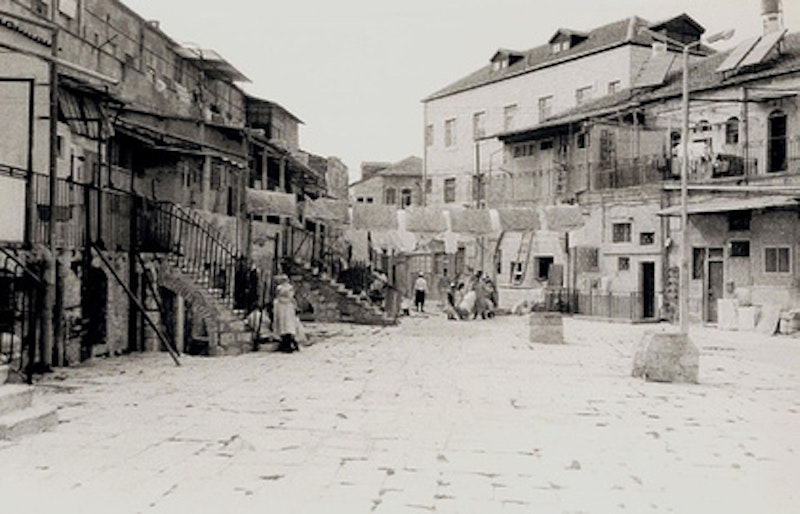 JERUSALEM - Did you see that? That's what we in the news industry call a "dateline" and it means that the report/story is coming from somewhere else. In this case, that somewhere else is Jerusalem. Thus, you can correctly assume that I'm in Jerusalem.

Following my college graduation, I decided to embark upon a five-week journey with seven of my best friends from school. Israel is the first step for the seven of us who are Jewish-the poor eighth is still at home. If you have at least one Jewish grandparent, you are able to take a free trip to Israel called "Birthright." We are on this trip.

If you've never been abroad before, then you should be made aware that when you leave America, you feel more American than ever before. Noticing the subtle differences in other cultures forces a sort of hyper-awareness about your own culture. This isn't necessarily the shock of seeing people driving on the wrong side of the road or hearing a different language, it's more like noticing the contrasts in how people form lines or eat food or interact with each other.

You also stand out. Those baggy jeans, white shoes, and baseball cap are immediate signifiers that you are American. Your walk, the absence of gratuitous amounts of gel in your hair, your glasses: they all tip off your American nationality. Many American travelers are ashamed of standing out, and to a degree, I'm one of them. I like feeling and looking as if I belong in the place I'm visiting, that I'm a part of the culture I'm visiting. But I feel like this everywhere I travel, the same in New York as in Casablanca. If I am going to get pegged as a tourist though, there is nothing I'd rather be than an American one.

People that say they're from Canada make me sick. Being American is a delightful privilege. Everyone knows you. When I visited Morocco, I realized something about telling people you are an American. People always ask where you're from in America. It makes sense in a place like London, where it seems that everyone has been to America at least once, but in Morocco, where most people don't leave their city of origin, it was odd to hear the question. Everyone assumes they know America. It's the only place like that in the world. A Congolese person doesn't regularly get asked where they're from in the Congo, for instance.

You're a celebrity. You're "that American." Many people have their minds made up about you. This is an unfortunate side effect of being the most powerful country in the world, but it means that you're a part of the most powerful country in the world. I doubt most Americans would choose to sacrifice this status just so we could be slightly less conspicuous tourists. Secretly, we need the recognition.

Israel doesn't want that attention. It's a tiny nation, comparable in size to the state of New Jersey, though it smells considerably more pleasant here. It's odd being a country so small. No Israeli is ever more than a four-hour drive from Jerusalem. There are New York state residents that are further from New York City. Yet, Israel looms large in the world. It is a holy land for the three monotheistic religions-Islam, Christianity, and Judaism--which means probably half the global population believes I'm in a holy city right now.

Typing out that "JERUSALEM -" was odd because I've seen it start off so many news stories. On the way out of Ben Gurion Airport in Tel Aviv there are road signs directing people to Ramallah, a tense city in the powder keg that is the West Bank. Israel is a first-world country for sure-the water is drinkable, it's a democracy, one of its major exports is technology rather than opium-but it's also war-torn. It is possibly the only country that fits this profile. I mean, shit, a week ago I was on top of a mountain in the Golan Heights where I could look out over both Syria and Lebanon. As I was staring at Lebanon, battles were breaking out in the streets of its capital, Beirut. You are in the fucking Middle East here.

I thought it might feel like home here. I wasn't sure, especially because I'm barely BARELY religious--I make it to services about once every two years--I identify so strongly with being an American, but I'd heard from other secular Jewish friends that you really feel a sense of belonging here. I am now sure that America is my home, not here. I've never really identified with Israel, but I thought coming here might change that. I've never really taken a solid political stance on how I feel about this region, but I thought coming here would change that. Maybe it will over the next few days.

Going through the checkpoints, seeing the Berlin Wall-looking security barrier between Muslim and Jewish areas, watching soldiers teach five-year-old children how to load an M-16 at an Independence Day fair, meeting soldiers that are four years younger than me: these things are foreign to me. Not soldiers themselves; I have friends that are soldiers, but the universal military service here is odd. Those five-year-olds are being taught how to use the weapons because they're going to have to some day. There is a burden to living in this region that I don't share. I take no part in the defense of Israel, nor would I. If the army was my calling, it would only be the U.S. Army.

It isn't that I don't care whether Israel survives or dies--I think the U.S. has a duty to protect any democracy, plus my girlfriend is half Israeli, so l have a different kind of personal stake in it. Additionally, Israel's destiny is closely tied to America's. Written on the side of the kids' M-16s were the words "Property of the U.S. Govt." Jesus. People hate America because of our tie with Israel, and within Israel, I get the feeling they kind of resent us a little bit for not having to fight like them but still feeling like we have a stake in Israel. There's also the fact that we're the other option. More Jews live in the U.S. than Israel, and only about 10 percent live anywhere else. The question is do you assimilate in America or join the Jewish state?

When I got off the plane in Tel Aviv, went through security, and walked outside for the first time, someone came up to me and said, "Welcome home." I thought that might be true-and in many ways, I wish it was-but right now, it's not. Instead, I'm more aware of my American-ness than ever before. There is something here, though. It's an amazing country, and I do feel like there's a part of me here, somewhere that I have to seek out. But my choice was made before I got here. I'm an American. No matter where I go, my jeans will be baggy, I will stick out, and I'll be damned proud of it.