Obama ran a great campaign, but we also have Bush II to thank for preparing the electorate for this moment. 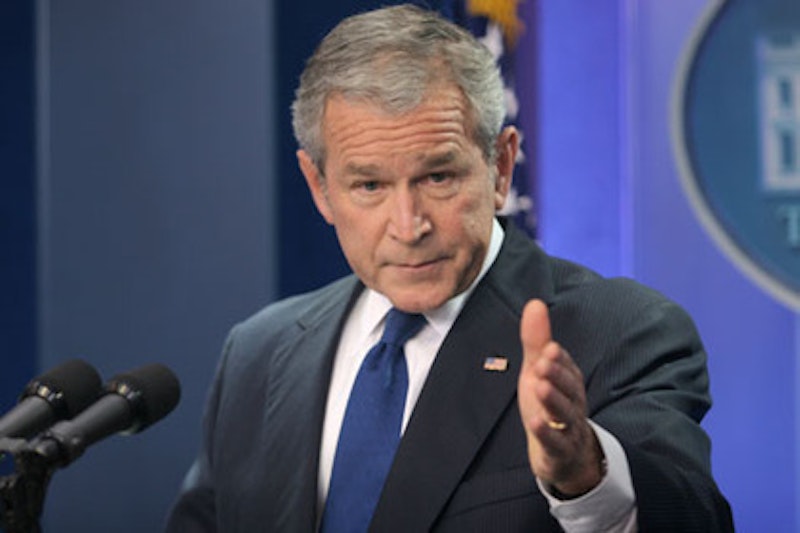 George W. Bush has often said that he doesn’t worry about what his legacy as president will be and that he’ll leave it for historians to decide. Many people view this as humble. Perhaps this is cynical, but I’ve always viewed it as a disguised cockiness—to me, it’s a bit presumptuous to think that he will even have some sort of a political legacy, and that his legacy will be the subject of rich historical debate. Most bad presidents don’t really have a legacy worth noting, other than just being a bad president. I don’t think many historians sit around debating the legacy of Warren G. Harding’s presidency, except to say, “Yes, President Harding did state, ‘I am not fit for this office and should never have been here’ shortly before curling up in the fetal position on the Oval Office floor and urinating on himself.  His pee-pants legacy lives on.”

Luckily, we don’t have to wait a long time to understand how history will view George W. Bush, because last Tuesday, we figured out what his legacy will be: Barack Obama.

I’ve been a supporter of Obama for president since his convention speech in 2004, so I’m not trying to say that he did not earn this win on his own. In his recent article on this site, Andrew Sargus Klein accurately pointed out that in 2004 people were clearly voting against Bush rather than for Kerry, no matter how much we denied it at the time.  Ironically, John McCain structured his campaign and his rhetoric such that it seemed like a vote for him was simply a vote against Obama.

Now, one might think that it sounds racist to say that Bush did such a poor job as president that Americans actually elected a black man, but truthfully that statement simply acknowledges our country’s struggle with the issue of race. Consider that in 2004, a significant amount of the country was already sick of Bush, and yet the majority of Americans still felt that a mild-mannered, rich, white war hero was too risky. Cut to four years later, and the country resoundingly elected an African-American 47-year-old with a history of drug use and a spooky, Muslim-y name. If you took a poll in 2004 asking people if they could picture an African-American being elected president, most people would say yes—after all, we’re familiar with The Fifth Element, Deep Impact and 24. But even in 2004 there had only been one popularly elected black governor in the history of the United States. And while all signs pointed to a Democratic victory this year, would the American people have elected Al Sharpton? Of course not—it was the combination of a particular political climate and a particular candidate that resulted in an African-American being elected president.

However, it’s not just the race factor that leads me to feel that Bush’s legacy is the election of Obama. Many traits of the two individuals seem to be diametrically opposed. I can’t help but feel like America elected Obama because he is the antithesis of Bush in many ways:

—Obama was a professor; Bush was a C student and the guy cheating off your test.

—Obama is Mr. Smooth; Bush is Mr. Choked on a Pretzel.

—Obama was a basketball player; Bush was a cheerleader.

—Obama put pressure on advisors and aides to resign when they came under fire from the media or screwed up during the campaign; Bush said, “Brownie, you’re doing a heckuva of a job.”

I’m sure I’ll catch flack for insinuating that Bush is terrible, and Obama is perfect, even though that’s not what I’m suggesting. However, such a reaction would be consistent with the large wave of Bush apologist articles I’ve been seeing lately. All of these articles have the same basic gist: Bush is actually a really nice guy who has been vilified and misunderstood, and all those Republican scandals were what ruined the party and not the Bush administration. But wait a second, isn’t this the party that believes strongly in trickle-down policies? And yes, I’m sure Bush is really nice guy; anybody who says otherwise is an idiot who doesn’t even know the President anyway. But for the last time, being a drinking buddy has nothing to do with being president—all that matters is how you lead. George W. Bush led poorly, and whether he wanted it to be his legacy or not, the election of Barack Obama will always be remembered as partly a reaction to his eight years in office.