A Rose-Colored Goodbye for The Rocky

It's never fun to see a newspaper go, but The Rocky Mountain News' eulogists need to realize that the paper's "death" is part of a larger struggle. 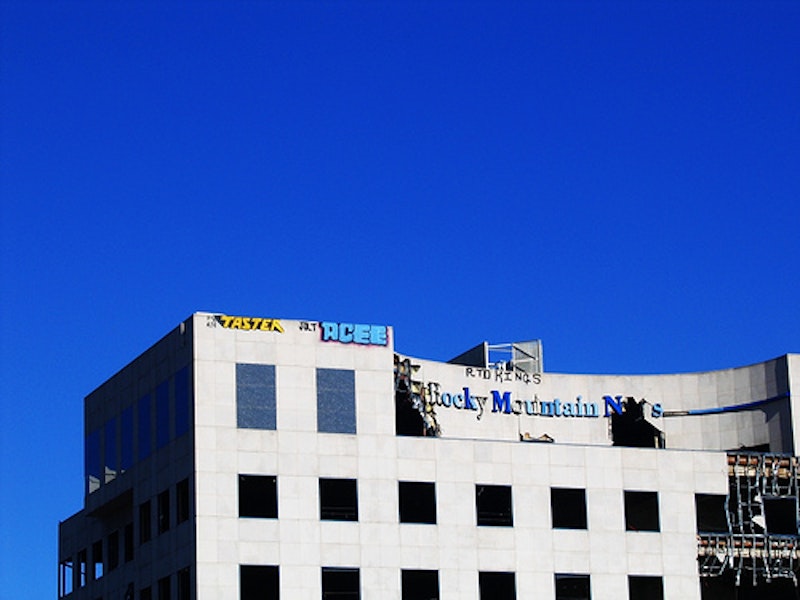 On the occasion of a newspaper's closure, saddened and out-of-work employees are given wide berth to romanticize, rant, weep or take the news with studied stoicism. Anything goes. And why not: as John Temple, editor of the now-departed Rocky Mountain News said last Thursday, although "people [were] in grief," he intended to produce a bang-up final edition the following day. "This morning (someone) said it's like playing music at your own funeral. It's an opportunity to make really sweet sounds or blow it. I'd like to go out really proud."

Living on the East Coast, I didn't see the last print edition of the Rocky, with its 52-page wraparound detailing highlights of the paper's 149 years in business, but it was apparently a splendid effort. Then again, who would argue otherwise under the circumstances; for the plain fact is that in a month or so, as Rocky readers go about their lives, the daily will be mostly forgotten, just another casualty of a punishing economic environment.

I read a number of the final columns by Rocky staffers online and Mike Littwin's* stood out for both his nostalgia and bile. "I know many businesses are closing, particularly these days," Littwin wrote, "But newspapers don't simply close. They die." That's the nostalgic part, although the self-indulgence (especially for Littwin, who's moving his column over to The Denver Post, along with the equally bitter Dave Krieger) might strike other Americans, and especially people in Denver, who've been to their own "living funerals" at shuttered companies as tone-deaf. And then he took a shot at the corporate owner, E.W. Scripps Co., that paid his salary for the past 12 years: "The guys in suits cut our staff... They cut our resources. On certain days, it seemed they were trying to cut our hearts out. The guys in suits-and I say this as someone who doesn't own one-don't understand what it means to be in a newsroom, or if they once did, they forgot."

Pardon the reality check, Mike, but I believe the "guys in suits" haven't forgotten the days of double-digit profit margins at newspapers (which allowed for bloated editorial staffs), no matter what the quality of the product. In addition, "suits" across the media landscape are also losing their jobs. Littwin's politics run to the left, and I doubt he'd label New York Times publisher Arthur Sulzberger Jr. as a mere "suit," even though the Times scion has made many painful cost-cutting decisions in his own company.

One more quibble and I'll lay off Littwin: He claims, "People are human, including newspaper guys. (That's what we old guys are-not ‘journalists;" we didn't become journalists until about 1990)."

It's apparent Littwin's off-hand remark that he sometimes wrote columns in "six minutes" was no exaggeration, for this is undeniably wrong. "Newspaper guys" became "journalists" in the mid-70s, in the wake of Bob Woodward and Carl Bernstein's earned celebrity status after their historic Watergate investigation. Suddenly, journalism schools were swamped with applicants, and the newsrooms of big metropolitan dailies transformed from messy Front Page surroundings to workplaces that looked, and felt, like an insurance office. (During college I worked one summer in the library of The Baltimore Sun, back when newspaper "morgues" were strewn with folders of all clipped articles, and was sorely disillusioned at the sterile atmosphere of the newsroom-save the sports section-an experience that so soured me on daily journalism that I took a gamble on "alternative" weeklies).

It's been noted in the Rocky obits that the paper improved substantially in the past decade, bagging four Pulitzer Prizes for instance, but my own introduction to the paper back in 1976 was hardly memorable. I'd taken a semester break from school to work at College Press Service in Denver-CPS was a "collective" of five people who functioned as a sort of A.P. for subscribing college papers, over 450 when I worked there-and as a lifetime newspaper reader who'd spent very little time west of Pennsylvania, I was flabbergasted at just how wretched both the tabloid Rocky and broadsheet Denver Post were. It was a helpless feeling, since The New York Times wasn't yet a national paper, The Wall Street Journal confined itself mostly to business, and although there were newsstands for out-of-town papers, copies from the East never arrived on the same day.

In fact, my clearest memory of the Rocky is from a gorgeous fall day in Denver, when I spent the morning in the city's Cheesman Park. A few hours earlier, I'd eaten some peyote buttons-they really sucked-and was a bit out of it on my walk and at one point sat on a park bench with a copy of the Rocky spread over my head to avoid sunburn. An older lady-probably younger than my current 53 years, but when you're a narcissistic 21, almost everyone seems "old"-tapped me on the shoulder and offered to escort me to a shelter for the indigent or runaways.

"You poor thing," she said with genuine concern, "I'm sure you haven't eaten anything for two days." Hail the good Samaritans in society, but this was just as ridiculous as the thread-bare political section of the Rocky—the presidential campaign between Jimmy Carter and Gerald Ford was reaching its conclusion—for while I was feeling mildly trippy, my blue jeans were clean and without holes, as were my sweater and swell cowboy hat.

Somewhat testily, I told the woman that her assistance wasn't needed or desired, and maybe she ought to go feed the pigeons or something that was more useful. I chucked my newspaper, walked to the Gilpin St. offices of CPS and knocked out a story about Nelson Rockefeller giving the finger to hecklers at a campaign rally on a college campus the day before. That juicy photo of Rocky did find its way into the Rocky, although the accompanying story was just two or three column inches.

Bill McGraw, a friend of mine at CPS, and now a staff writer at the Detroit Free Press (one of six or seven dailies on the most-endangered list), echoed my feelings about the Rocky when I contacted him last Friday, just for a memory check. "Your recollection of the RMN is right on," he emailed. "It was fat and dull. I recall many mornings at the Kitchen on Colfax turning its pages in a sort of stupor. Compared to New York's Daily News and Philly's Daily News, my two favorite tabs of yesteryear, the RMN was like a community weekly that came out every day. The only thing that saved it was the Denver Post of that era was even worse... I understand [both papers] had improved over the decades. We have a great photo department here at DFP, and my photo friends say the RMN had become one of the best visual papers in the country."

Patty Calhoun, who founded Denver's weekly Westword with some friends in 1978, and remains as editor of that very good paper, agreed. "I remember that both papers were dull, dull, dull. But the Post was far duller than the Rocky."

As a veteran journalist—or maybe that's "newspaperman"—I find no solace at all seeing print publications shutting down every month. But I do believe, at a time when the layoffs at much larger companies across the country dwarf those in the media, fellows like Mike Littwin could look beyond his own situation and put the Rocky's unfortunate demise in perspective.

*This article did not originally link to Mike Littwin's Rocky Mountain News piece. We regret the omission.