Wrestling With College All Over Again

The admissions merry-go-round is far more fierce, and absurd, than a few decades ago. 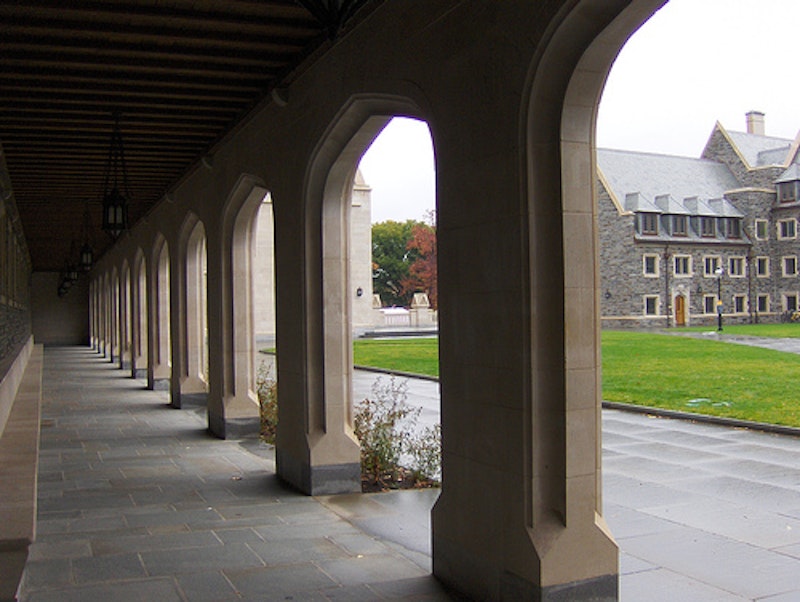 An old saw that I’ve never had much truck with is the notion that the time a person spends as a college undergraduate are the best years of his or her life. Man, that’s depressing when you think about it: you’re 21 and it’s all downhill from there? No complaints from this quarter about my own experience; I had a ball, juggling a taxing curriculum, a couple of part-time jobs, work at the student newspaper and a heavy load of extracurricular activities, which, for the sake of self-incrimination, I’ll leave to the imagination. Nevertheless, it was just one facet of growing up, and the “real world,” peaks and valleys included, is a lot more interesting than all-nighters, afternoon keg parties on the quad and suffering the indignity of listening to an assistant professor digress from the subject at hand and drone on about the state of the world. Maybe that’s why academics are, in general, so annoying: they live in an oasis where sycophantic students, practicing the art of professional sucking up, hang on their every word. Or, at least, they pretend to.

I’m reminded of this because as April 1 approaches—the traditional date of receiving a thick or thin envelope from colleges—there’s an understandable amount of anxiety in the community that includes my teenage sons, their friends and one of my nephews. As my older son is a high school junior, we’ve just begun the college racket marathon, which is a lot more complicated than when my brothers and I went through the process decades ago. I’ve no idea when it got so ramped up—when you’re changing diapers, reading Dr. Seuss before bedtime and cheering (or consoling) at Little League games, sending off Mister or Miss Precious to college seems like an eon away—but it’s not a lot of fun.

When I was a kid Stanley Kaplan might’ve been a neighbor or schoolmate, not the name of a huge $2.6 billion behemoth that preys on the insecurities of students and their parents about SAT (and LSAT, MCAT, GMAT, GRE, etc.) scores. (In my professional circle, Kaplan, Inc. is more notable for propping up The Washington Post Co., which shrewdly bought the company in 1984, probably never dreaming it would one day be the savior—for now—of the newspaper still eight miles high from Watergate glory.)

In fairness, competition for acceptance at top colleges is far more cutthroat today, so it’d be churlish to begrudge parents for sending young Dylan, Addison, Tyler or Che to the neighborhood Kaplan factory; hey, another 100 points on the test could make a difference. Or so it’s said. I have a more cynical view about the college admissions rat race, one that’s not as far-fetched as you might think. There’s a weird twist to years of building an academic resume, as well as playing violin, two sports and leading this or that green awareness campaign: a student’s fate at a particular school might be decided in two minutes, yay or nay, depending upon the mood of the (usually) young employee who has the onerous task of sifting through 10,000 applications.

Back in the late 70s, a bright friend worked in the admissions office of a highly-rated university—a respite before going on to law school—and she filled me in on the underbelly of crunch time in the two months leading up to April 1. Since procrastination goes hand in hand with such a job, my friend and her colleagues found themselves in mid-February swamped with reams of paper to sift through, and while she claimed most applications were duly considered, a lot were either discarded or rubberstamped on a whim. A hangover that day? Bad luck for the kid in New Jersey with a 3.8 GPA who emptied bedpans at a retirement home five days a week. Lucky in love? Then a big collegiate welcome to a less qualified teenager who hit the lottery and thought it was because of his or her total awesomeness.

As I’ve learned in the past year—even while taking pains to ignore my older son’s utterly dismissive declaration of, “Dad, applying to college is nothing like it was when you were my age”—the rituals have really changed. For example, it’s now routine for high school seniors to apply to as many as 12 colleges, take the SAT’s (and ACT’s) until a desirous score is achieved and send the same personal essay—with just a quick cut & paste job—to each school. This is no knock on the kids or their parents: just as a businessman adjusts to a recession or higher taxes, you play by the current rules. I suppose one of the reasons the competition has ratcheted up several notches is that Baby Boomers, having kids later than their own parents (myself included), have gummed up the works, adding their spawn to the already increased number of applicants from the children of younger men and women. Could be I’m all wet on this—my Pepsi Generation/Mr. Ed-watching membership does include, after all, a certain degree of self-absorption—but (naturally) I don’t think that’s the case.

Two weeks ago, for example, while in New York City, my sons and I attended an hour-long information session at NYU, an acclaimed school that draws applicants from throughout the country and world. It’s acknowledged, no doubt accurately, as an excellent place to matriculate, although as a much younger man, the only thing about the university that registered in my mind was that filmmaker John Waters got the boot for smoking pot in an NYU dormitory room back in 1966. In any case, there we were in a small auditorium with maybe 75 other people—parents and students, by appointment only—and a fast-talking, articulate and funny woman held forth about the various advantages of an NYU education (and really pushing their new campus in Abu Dhabi), before sending everyone out on a tour of the scattered “campus” which, for better or worse, defines much of Lower Manhattan.

She referred to the duplicate computer-produced personal essays and warned the students to proof-read: “It doesn’t make a favorable impression if you’re applying to NYU and you close the essay with ‘And that’s why Columbia University is my first choice,’ so please, stay on-point.” Not sure why, but I got a belly laugh out of that quip—obviously part of her daily shtick—but there was an air of condescension that enveloped the room that got my goat. Yes, everyone there knew that NYU accepts a small percentage of applicants, and I think the credentials of a typical chosen one—3.7 GPA, fabulous standardized testing results, and the whole lot—scared the piss out of many of those present, but the haughty air of not just this employee, but the three people I spoke to on the phone attempting to earn and confirm said appointment was a little rich for my blood—and I’m not referring to the annual $51,000 tuition plus housing fee.

Karen Stabiner wrote a mildly amusing Los Angeles Times op-ed on March 28, which, while infused with forgettable cornpone, did make the very valid, and vexing point that college tuitions are recession-proof and have consistently outpaced inflation. Oh, and then there’s the status sticking point. Stabiner, who has a child currently in college, writes: “What, exactly, do we think we’re buying? If you tell me it’s a splendid psychology curriculum for your budding Freud, I bet you’re lying. Admissions has become a contact sport. The real thrill is having your kid get into that school, especially if somebody else’s kid didn’t.”

There is a high degree of truth in that sentiment. I clearly remember, in the late 90s in Manhattan, the competitive nonsense my wife and I had to endure when our boys were applying to … kindergarten. But truthfully, as far as college goes, I don’t give a hoot about “winning” this perverse game: as long as my kids are happy about their final selection, that’s victory enough. I just don’t relish the endless preliminaries.