Students in Washington, DC public schools now have the chance to make money just by showing up to class. Is this the beginning of a school board turnaround or an admission of defeat? 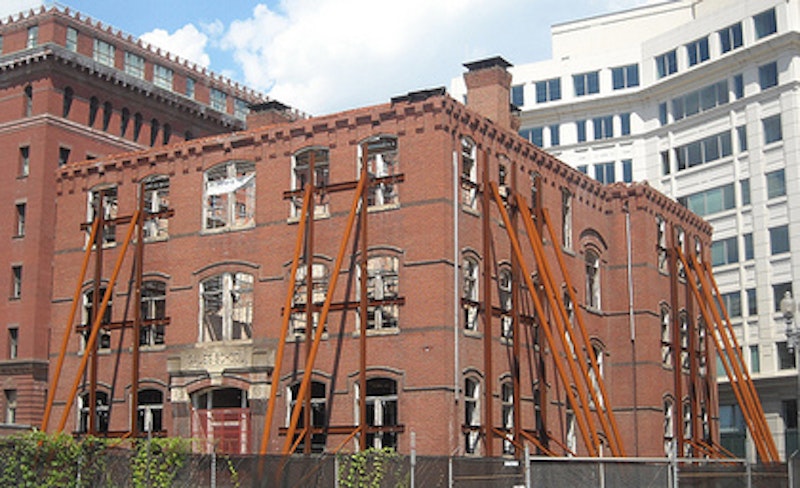 The Gales School in Washington, DC. Photo by NC in DC.

Well, I suppose it was inevitable. DC Public Schools Chancellor Michelle Rhee announced earlier this week that she plans to implement a pay program at 14 of Washington's middle schools, rewarding students with regular attendance, good grades, and test scores with cash. Anyone who's been following Rhee's drastic overhaul of the District's public school system over the past few months knows that she acts swiftly—pushing school renovation through a traditionally lethargic and stubborn bureaucratic system. In just over a year, Rhee has closed dozens of schools, fired more than 30 principals, and transformed the overall environment for senior teachers, who were becoming more and more complacent with their tenure. The firings have not been without controversy as illustrated by some unexplained dismissals. Up until now, the community has, for the most part, warmly welcomed the chancellor’s reforms. But as the sleekly titled "Capital Gains" program embarks on its first experimental year in the nation's capital, critics have already expressed their disapproval. They argue that issuing money as a motivator essentially gives up on parents and communities, and that it sacrifices the basic principles of education. While I don’t believe this is a long-term solution to the city's academic woes, some good can come of it as long as we're willing to accept that we've reached rock bottom.

Here are the specifics: The program, beginning in October, will allow students at the 14 chosen middle schools to earn points for displaying good behavior, turning in homework, and receiving good grades. Each point will be worth $2 with a max limit set at 50 points per month for each student. So, students can make up to $100 a month. The $2.7 million budget is funded in part by Harvard's American Inequity Lab, which has implemented a similar pilot program with success in New York City.

The arguments against Capital Gains begin with the idea that Rhee is resorting to an experiment that trivializes the building blocks of education. What happened to knowledge for knowledge's sake? Once financial rewards are introduced how will students respond to carrying out work or simply attending classes when money is no longer handed out? Researcher and author Alfie Kohn put it nicely when he said that such a program "undermines the very thing you're trying to promote by getting them (students) hooked on rewards." As a general statement, Kohn is correct. Likewise, all of these questions are reasonable concerns. But I don't care for the argument that this program neglects the higher value of knowledge. When only nine percent of the city's public school students go on to acquire a college degree, the focus should be on getting kids through high school by any means necessary. It's foolish to insist that kids pursue their studies for "proper" reasons, especially when many attend school begrudgingly. This isn't a concession of the value of education. It's a rationalization that a love of learning is not always inherent in a student's mind and the value of a high school degree not immediately recognizable. Besides, money is involved in every aspect of our lives and there are plenty of socially acceptable moments where student activity and economic gain reach a tricky intersection (just think about college football). The idea that knowledge is sacred and is somehow degraded as a result of this program sounds pretty 20th century.

Another opponent of Capital Gains, Washington Post columnist Marc Fisher, has described paying students as the "ultimate expression of surrender." The ultimate surrender of education? No. But the ultimate surrender of parental and community influence? Sort of. On a surface level, the program seems to give up on exterior motivation; parents are replaced with $20 bills and so forth. But few will defend the hundreds of district parents who are absent in their children's education. By establishing joint accounts for students and guardians, the program hopes to create more of a family dialogue, thus putting parents back in the equation.

The real problem is that this quick fix solution can't work on a large scale or longer plane. Like the voucher system, only a select group will ever be able to participate in Capital Gains, and it will always provoke other students and teachers who feel disenfranchised. Don't be surprised to hear teachers complain, "How can I motivate my students when they aren't even being paid to come to my class?" Also, some studies have shown that while monetary incentives boost participation, they do nothing to improve test scores.

So what is this program's worth beyond a one-year spike in attendance? Creating a bank account for a student won't immediately teach them about money management but it's an important start, even if a majority of those earnings will probably go toward food and video games. As it is now, accounts will be immediately accessible to students. It would make more sense for the rewards to go toward something greater, such as a college scholarship with a couple bucks thrown in for those CVS purchases. That way both needs are met, the immediate reward and the greater hope. Middle school is indeed a pivotal time for students. This is when they are making a decision between fully engaging themselves in their studies and dropping out. It's also a time when kids start to become more financially independent, picking up a part time job outside of class. And it's the temptation of immediate earnings that lead kids to consider dropping out of school altogether. By paying kids, Rhee and other administrators are crossing their fingers, hoping that it will be just enough of a push to get them through high school. One of the District's biggest problems is getting kids to graduate and seek a college education, and if this raises the number of high school graduates, well, then it must be considered.

Capital Gains is sure to be under fire throughout this year until we see its full effect. But what this amounts to is a city that's desperate and is finally willing to gamble a bit (thankfully on someone else's bill). It may be a substantial transformation of what we've come to know as the building blocks of education, but it shouldn't be surprising. So many people have failed the city's kids that maybe the best motivator really is a check at the end of the month. District mayor Adrien Fenty says, "The city has spent an inordinate amount on a school bureaucracy over the years that has failed students. Why not direct some of the cash to the students." It's a painfully blunt statement, maybe too real for some to accept. And as far as changes go, a privately funded, one-year experiment hardly seems dangerous in the shadow of years and years of static decay. There will always be a time and place to question how to fix the public school system. It seems to be in our blood. So for the time being, let's let the veins grow green and see what comes of it. There's nothing left to lose and perhaps just a little bit to gain.