The de-centering of individual departments has made liberal arts education a purely self-serving industry. 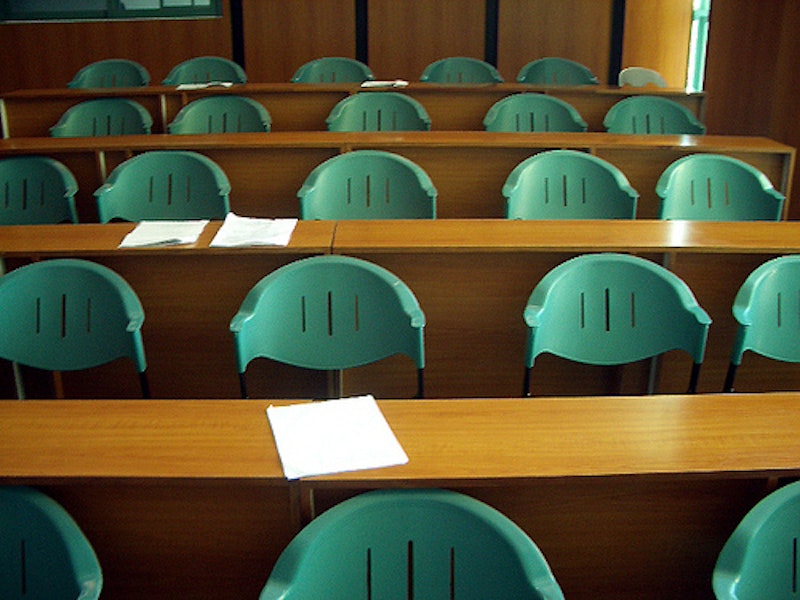 As unbelievably stupid classroom comments went, this one really set the bar higher than I thought it could go. It came during my last semester as a senior at the University of Maryland, in a 300-level survey course on pre-20th century American literature. When the professor responded with, “Hmm. That's definitely interesting. That could make for a good thesis in your final paper,” I knew that I'd wasted most of the last four years.

The course itself, ENGL 307, one of the required survey courses for English lit majors at my alma mater, was taught by a woman in her late 20s or early 30s, a few years out of a competitive grad school program that had obviously prepared her for writing lengthy screeds for publication in obscure journals and little else. Teaching was not her forte, and the syllabus didn't do much to hide her politics: one month on early settlers diaries and travelogues, two months on slave narratives, one week on Whitman and Dickinson combined. It was a little horrifying to watch the English Canon be beaten into the ground right in front of me, but I needed the credits to graduate.

I made it through those four years mostly by taking as many classes as I could with one of the oldest professors in the department (a Johnson scholar with a profound interest in Romantic and early modernist poetry), but the various rifts in the English department—and in other academic departments generally—were obvious even by my sophomore year. More and more bizarrely specific specializations meant that two professors in the same department (an English professor who had made a career out of analyzing Beowulf, say, and one who only teaches African post-colonial literature) might have almost nothing to say to each other. Younger professors fought for tenure, which usually meant focusing almost exclusively on research and publication: racking up a lengthy list of books and articles, so prized by the administration, and only made possible by the cheap labor of some poor Ph.D. candidate (See Thomas Benton's recent piece in The Chronicle of Higher Education). Most of the older professors who had tenure became more complacent every year. Most of the courses were so concerned with test scores (often multiple choice or short answer) it felt like high school redux.

Part of the problem, of course, is our assumption that everyone should go to college, which is why most of high school is just college prep: take AP courses, meet with the guidance counselor, consider your extra-curriculars (“Oh, you're in the band and volunteering at a soup kitchen? Good, good.”), take SAT practice exams, go through multiple drafts on your essay, and so on. But this only means that more and more college students are under-qualified (“18-year-olds who find Newsweek over their heads,” as Richard Rorty put it in his book Philosophy and Social Hope), and that the college curriculum is dumbed down in turn. The colleges make up for it by offering more advanced students options like honors programs (which usually amount to a couple of more classes and papers). And the idealized Liberal Arts education turns 100- and 200-level foundation level courses into huge lecture-based surveys for students who need the credits to graduate. No one can honestly think that my taking two gym classes, one lab science, one social science, and one math course turned me into some kind of Renaissance man, but it did get me to pay out a few thousand dollars more.

In an op-ed for The New York Times a few weeks ago, Mark C. Taylor, chair of the Religion department at Columbia University, laid out the framework for a wholly redesigned university system—one that would, among other things, dissolve all departments in favor of “problem-focused programs.” As Taylor writes:
These constantly evolving programs would have sunset clauses, and every seven years each one should be evaluated and either abolished, continued or significantly changed. It is possible to imagine a broad range of topics around which such zones of inquiry could be organized: Mind, Body, Law, Information, Networks, Language, Space, Time, Media, Money, Life and Water.

Consider, for example, a Water program. In the coming decades, water will become a more pressing problem than oil, and the quantity, quality and distribution of water will pose significant scientific, technological and ecological difficulties as well as serious political and economic challenges. These vexing practical problems cannot be adequately addressed without also considering important philosophical, religious and ethical issues. After all, beliefs shape practices as much as practices shape beliefs.

A Water program would bring together people in the humanities, arts, social and natural sciences with representatives from professional schools like medicine, law, business, engineering, social work, theology and architecture. Through the intersection of multiple perspectives and approaches, new theoretical insights will develop and unexpected practical solutions will emerge.


If you think all this sounds too radical to ever be achieved, I'd probably agree. Colleges are increasingly in the business of making money, and nothing about Taylor's ideas are particularly friendly to that end. But if you think it all sounds too much like vocational training, I'd argue you haven't considered the increasing irrelevance of many academic departments, and the failure of a modern Liberal Arts education to bring together increasingly disconnected disciplines in any meaningful way.