Lots of smart ideas and ambition among the students, but not much tolerance of the “townies” or normal folk outside the campus bubble. 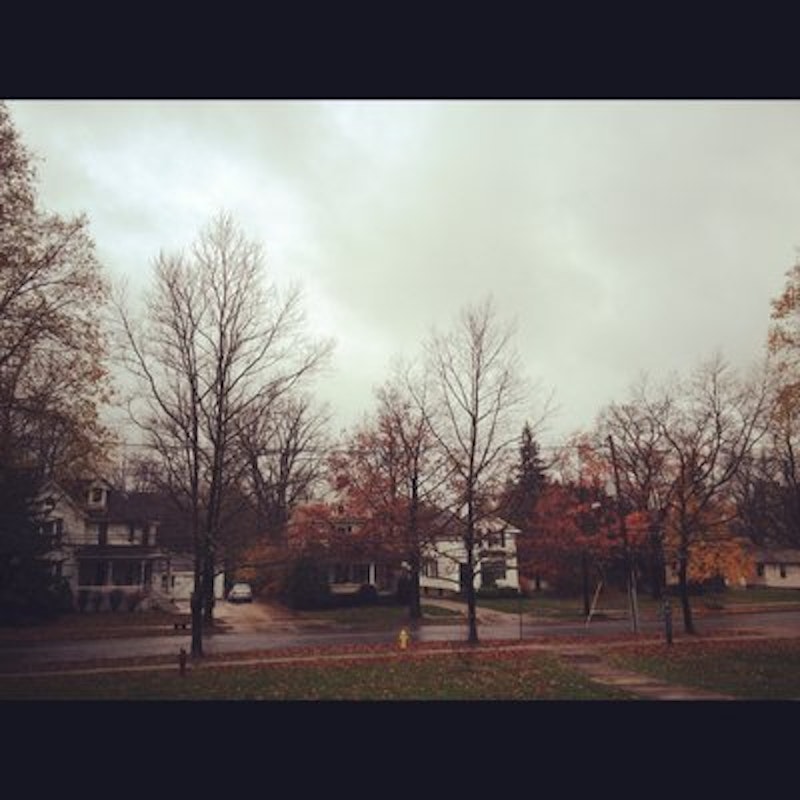 I was relieved but also a little disappointed when it turned out I’d be visiting Oberlin College in the Ohio town of the same name two days after the Obama victory. Planning the trip weeks prior, I got a perverse thrill out of the thought of visiting my friend Jack when 99 percent of his campus would be sunk in an abyssal depression and contemplating suicide over the national regression that was months away. But it wasn’t to be. Oberlin is a microcosm (like, super micro—2500 students ensconced in a campus surrounded by suburbs, water towers, and lots of corn) of the emerging super-progressive values of the Millennial generation. Obies are turned in, tweaked on Adderall, and eager to move on from the comfortable but restrictive values of their bougie, Boomer parents (a very common insult—“that’s so bourgeois”).

Oberlin is full of kids who probably had a shit time in high school and have finally found their oasis, where there are no athletes, Foucault is a rock star, everyone’s a swinger, the twitchy, nervous guys with patchy beards all get laid, and the women all wear Doc Martens, black everything, ripped tights, and strut about like death rock goddesses. It’s easy to become infatuated even after a few days with the culture.

2012-2013 is “The Year of the Queer” at Oberlin, two semesters of focus on the state of LGBT affairs and gender politics on campus and the world at large. I took this in by reading an interview in The Grape, their “alternative” newspaper, with a Queer Year head. Most of her ideas are spot on—fuck the gender binary, call me Larry or Lana, I’ll wear a suit and tie and keep my hair long, I’m not gay, lesbian, or transgender, I’m queer. It’s a political statement rather than simply sexual orientation. Destroy the heteronormative constructs that we’re forced to occupy every day—men, women wear this, say that, act a certain way. It is dumb, and anyone with a brain knows it, even if they’re not totally accustomed to life as a post-gender proposition yet. Where this student lost me was when she talked about picking up a gender studies professor in Cleveland and having her car break down by the airport. “The Cleveland airport is full of ignorant, incapable human beings,” she sneered, “and when the tow truck driver picked us up, me and the professor were talking about Lacan, social constructs, identity politics, and this tow truck driver has, like, no idea, what’s going on.” When I read that quote, I let out a huge belly laugh, netting a handful of dirty looks in the library. How could one be so un-self-aware to be a gender theorist and LGBT activist and make such a fucking idiotic statement like that? You sound like a middle schooler—bullied for ages, ready to bully back.

Not that there’s anything mutual in the oppression and abuse of the LGBT community and some vacant name calling, but it’s the insularity of such a small and mega-liberal college that will make you blind to the outside world and the lives of, ahem, regular, working class people. Early in my trip, I was reading outside by a basketball court when a pack of middle schoolers, derisively dubbed “townies” by the Obies, roamed onto the court and started what must be a regular bull session: calling each other gay, screaming “nigger” for no particular reason, talking about crushes and insisting that she, someone, “wants the D, bro.” I chuckled at all this and remembered what it was like to quote Borat and flirt with girls by making fun of them, but the gathering took a sharply dark turn when two of these young women started fighting—first slaps, then hair pulling, then full on rubbing each others’ faces in the mud. They were both screaming bloody murder and I had to go and stop them, only to be pushed aside by some 14-year-old who warned me, “Don’t do it, bro—even I couldn’t break them up.”

Whoa. Guess I’ll step aside then. Jack met up with me soon after, and I walked away feeling nasty thinking about how stark the divide was between the liberalism of Oberlin and the lower middle class suburban ennui of the town itself. To Oberlin students, the “townies” may as well not exist. This sort of hypocrisy is disheartening but ultimately very human—what do you expect a bunch of kids who’ve finally found their intellectual, social, and sexual nirvana to think of an anonymous Midwest town whose values don’t extend past their own feet? And what of those “ignorant, incapable” human beings of the Cleveland airport? Are they all really enemies of the awakening progressive consciousness? Maybe, but they’re people too, with jobs, families to feed, and a particular set of circumstances to work with. They’re no more ignorant about your lifestyle than you are about theirs.