Don't Have Sex With Your Students

Why is this the first piece of advice that new T.A.'s get? 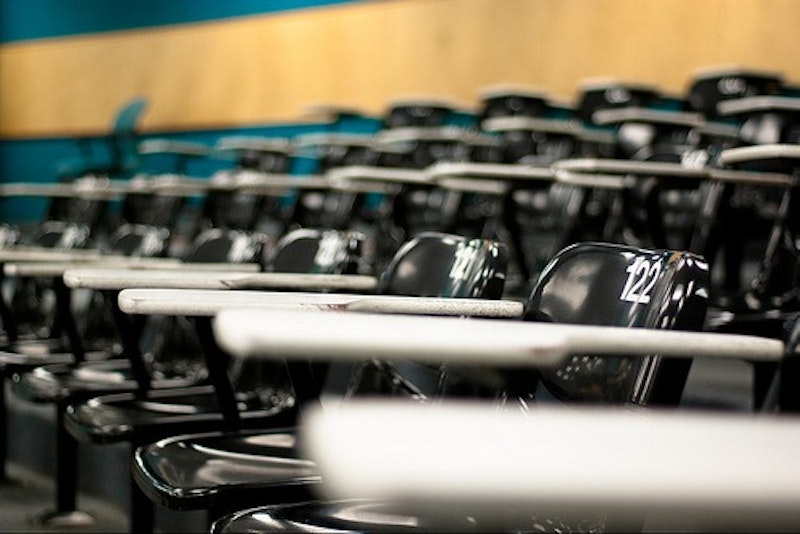 In two weeks, I'm going be a T.A. for the first time. Holy fuck. I'm gonna be in charge of minds and stuff. T.A.'s hold office hours, grade papers, encourage students to pursue grad school, and make sure peeps understand the material, meaning that, ugh oh, I gotta do all the reading and for real this time. All this responsibility for someone who still forgets to pay his cell phone bill each month.

OK. So We The T.A.'s for this particular class had a meeting with the professor going over all the deets-you know, don't give anything below a C, be firm with the deadlines, etc. But the most urgent morsel of advice was boldfaced: DO NOT SLEEP WITH YOUR STUDENTS.

Bwahaha! This cracks me up! Because obviously the first thing I do when I enter a classroom isn't taking role, it's when I think: "Alright, which of you twinks iz gonna be my sex slave?"

I'm curious, though: have you ever slept with a professor or a T.A.? I can't remember ever having a crush on a prof before, prolly because they're all OLDS and I'm not so into the daddy thing.

Am I alone for thinking that it's just a little awkward for a high and mighty professor/university to tell you what to do with your sex life? Not that you should sleep with your students because that's, um, totally your call and I don't want to hear about it.

When I was an undergrad, I thought that dating a grad student was the coolest thing ever. They were a smidge older, "smarter," and might give you an "A." For a whole year I dated "James The Biologist," a grad student in the Botany Department at my undergraduate place. Though I was never one of "his" students, my fav part about dating him was when we would get together and laugh at his students' mistakes on their papers!

Then I got to grad school, still thinking like an undergrad. I became close friends with a handful of UGs, and even went to a couple UG parties before I realized...um...I'm way too old for this shit. You guys were, like, born in 1990.

The truth is that sleeping with students is not limited to grad and undergrads. There are gazillions of stories about grad students who sleep with their professors, too. I once heard tales about "Thomas Smith," an uber famous history professor with a wife and kids, who edits a highly regarded academic journal, and who also happens to (allegedly!) bone both his male and female grad students "because he can."

"I'm Thomas fuckin Smith, beeyotch. If you want a career, bend over."

Despite the dry prose, Ivory Tower syndrome and awkwardness in social situations that plagues all academics, this just shows that academia is really no different than any other job where people sleep their way to the top. Hollywood. Investment Banking. American Apparel. Undergrads sleep with the T.A.'s to get an A; grad students might sleep with undergrads because they can't get laid elsewhere, and they sleep with professors because they want to be famous. I think it's less about mixing business with pleasure than about our egos getting out of hand. Folks think that because they're some almighty professor or grad student or whatever that they can do whatever the hell they want. What are people gonna do? Say something to you about it?

I'll tell you what really cracks me up: professors who have X-X-X profiles on hook-up sites! Last year a friend of mine sent me a link to the (alleged!) Manhunt profile of an eminent professor. This professor's profile was relatively discreet-no headshots or anything else that would make him known. A touch less discreet, though, was his cock size and erotic interests. You know, normal stuff like bondage and water sports. Now whenever I see him the internal monologue that runs through my head is, "Hi, Professor Z. You have a nine-inch dick and you like to be peed on. How's that book on Beethoven coming along?'

Don't get me wrong; I love when celebrity academics traipse the Internet for gay cock. The only thing I wonder is: don't these professors worry that their identity will someday be unveiled?I guess that's the kind of risky fun you need when you're trapped in a classroom or library for hours on end.