What do sissy rappers, sandwiches and Home Depot have in common? 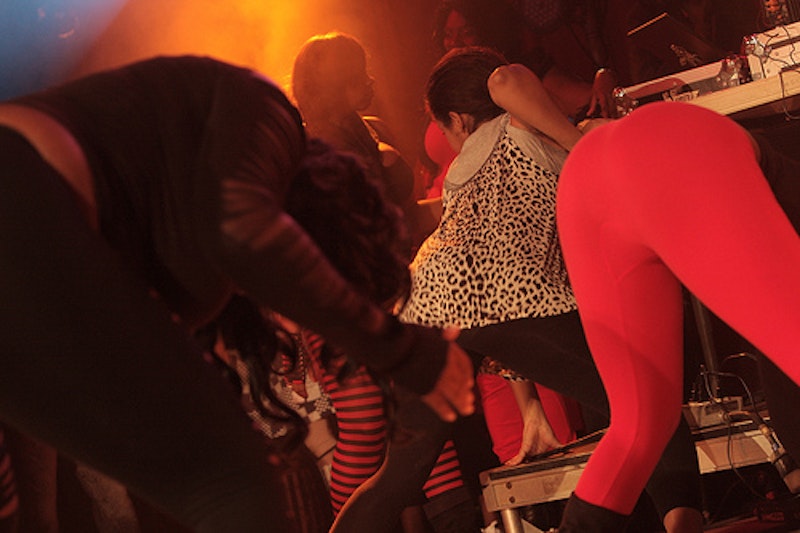 The other day my mom said she heard something about New Orleans Bounce on NPR and that she was really into it. It sort of blew my mind that not only was NPR able to find 30 seconds of bounce they could play on the radio, but that my mother of all people was expressing interest in hearing more. After she asked a few times to burn her a mix, I had to put my foot down. “You won’t like it,” I said. She replied, “Why not?” Because it’s the most explicit music you could imagine Mom, and I am not burning you a CD that contains the phrase “It must be the pussy cause it ain’t your face” more than 50 times. That led to her asking me what specifically was the appeal of Bounce music, which I’ve thought about long and hard, and have failed to come up with anything but vague revelations like people who love the music they are making tend to be more fun to listen to, and New Orleans is the weirdest, most tragic, and best place in the world.

As evidenced by the “New Orleans” that comes in front of the genre nom “Bounce,” the dance/music style is fiercely regional and has only recently gained enough national traction (was it the Super Bowl?) to make its way into Suburban New Jersey mom-consciousness. It’s been around for a while though, at least 15 years, which is an eternity for such a specific descendant of hip hop to keep essentially the same sound—which is basically call and response chants about sexual maneuvers and different wards chopped up over warp speed Windows 98 beats. I don’t think I have the perspective to explain why this is relevant, but Bounce also happens to be the only type of rap that has openly gay and transsexual MCs. In fact, my holy trinity of Bounce—Katey Redd, Big Freedia and Sissy Nobby—proudly self identify as sissy rappers and yet they are beloved by tough dudes like Juvenile.  I guess an ass is an ass and a hot sausage poboy is a hot sausage poboy.

Anyway, I make no apologies for the content of any of these songs or videos, but be forewarned that they are certainly not safe for work, children or any place where you are expected to not be dancing. Also, I can’t be expected to rank these, I love them all too much.

This is considered by a lot of people to be the original Bounce song, or at least the first one people can agree about. It’s extremely tame compared with what I’m about to post, but it’s the template.

This tune shares the same beat as the last song in this column, as is common, which makes attribution pretty difficult. In fact Bounce artists not only share beats, but also many of the lyrics are repeated, regardless of origin. This video also does a good job introducing you to the dancing style also known as New Orleans Bounce, and alerting you to exactly how much fun you never knew you could have in a Home Depot.

Sissy Nobby shaking it in his bedroom

Still feeling it, Mom? I feel like low production quality is an important aesthetic in bounce, but honestly these rappers are just poor and that’s kind of patronizing. It does explain how a crew like Da Chaotic Shakaz can operate (and make videos) like they are a skate crew.

Not surprisingly, a lot of these artists were displaced by Hurricane Katrina and ended up in Houston where Bounce subsequently caught on. Redu is one of the artists that brought it there, and is one of the best at bringing in samples from the larger world of radio rap while keeping it really real.

It’s important to note that Big Freedia, like a lot of these artists, perform every single night at parties all over New Orleans, and that all these artists are part of the same small scene. It probably happens occasionally, but I haven’t heard of any beefs in the community—that would probably happen if more money was at stake, but its also a testament to the fact these musicians are making this stuff cause they genuinely love it.

I could see something like this somewhat crossing over to the mainstream, but I don’t think a pure bounce song is ever going to get played on Top 40 radio. Its influence is definitely felt more subtly—like Rihanna repeating “Where dey at?” or some of Lil Jon’s crunk beats. Also, this is the only bounce video I’ve ever seen that is not 100 percent ass shaking—like someone said in the comments, “looks like someone’s trying to get on B.E.T.”

This is about as close as it ever got, but I guess there’s still a chance Bounce can blow up. I’d love to see these artists be able to tour nationally and actually move units, but unfortunately I’m not in charge of these things.

You can’t deny that someone who wholeheartedly reps New Orleans’ sandwiches has a lot of pride. Maybe this afternoon I’ll take a cue and rep Philly accordingly. I’m going to buy some sandwiches, maybe even a roast beef one in tribute to this video but definitely a hoagie or Turkey Gobbler with cranberry sauce and gravy if I can find a Wawa in Baltimore.