Your Guide to Blaqstarr's Contributions to /\/\/\Y/\ 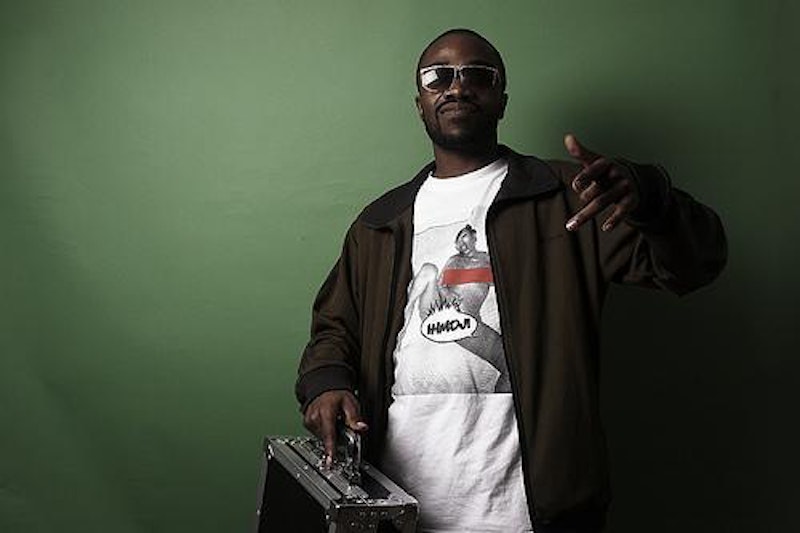 On M.I.A's last album Kala, Baltimore's Blaqstarr produced “The Turn” and allowed producer Switch to turn Club classic “Hands Up Thumbs Down” into “World Town”. Now, Blaqstarr's behind the two best tracks on /\/\/\Y/\ (“XXXO” and “It Iz What It Iz”) as well as every bonus track on the “deluxe edition.” While the 1000th think piece on M.I.A's latest shows up in your RSS feed, I thought I'd narrow the focus a bit and look at the contributions of a Baltimore Club game-changer.

—“XXXO” (Produced by Blaqstarr & Rusko)
Like Blaqstarr's recent single “Oh My Darling”, “XXXO” is based around a super-simple drum pattern and punctuated by a slow-building, sucking noise every few bars. Here, that strange skeleton of a beat gets overcrowded with the kind of rambling, in-the-red sounds familiar to anybody who’s heard Rusko's “Woo Boost."

Indeed, Dubstep's been talking to Baltimore Club for a while now—the best piece of evidence being Benga's “Baltimore Clap”—and M.I.A bringing together two of the best (and best known) producers in each respective scene is prescient. “XXXO” should sneak its way onto the radio every bit as comfortably as “Paper Planes” did a few years ago. It's just as adventurous and even more natural its pop concessions. This is probably what Lady Gaga's next, next album will sound like.

—“It Iz What It Iz” (Produced by Blaqstarr)
This sounds like an R & B jam emanating from laptop speakers down the hall. All the right pieces are there, but there's something off about it—it's too foggy, so your ears never lock into it entirely. But that’s Blaqstarr and M.I.A's aggressively off-center take on pop: all moody drunken atmosphere close to what's on the radio but rarefied enough to stand out.

A small in-joke on this track is M.I.A's use of the “shawty” at the end of the “it is what it is” hook—itself the kind of Zen-stoner wisdom that informs Blaqstarr's music and crowds his Twitter feed. If you've ever heard Blaqstarr speak, “shawty” is one of those words he jams into pretty much every sentence.

“Internet Connection” has the strains of traditional Club music in it—hip-hop drums and raucous shouts—and the use of Internet and computer sounds (the Mac Photobooth sound, digitized glitches) reflects Club's grab-from-anywhere sense of sampling. “Illygirl” is perhaps the most typically Blaqstarr-sounding track here: a slab of horrifying, stuttering House that bends into itself until it's a weirdly catchy whirl of danceable noise.

The secret about Blaqstarr is that he's a beautiful singer and on “Believer” he answers M.I.A's B-girl posturing with an out of nowhere wounded, toast-style croon. “Caps Lock” is the perfect complement to “Believer” in the sense that it's M.I.A's chance to emote over a minimal beat. It's her best vocal performance on the album, even if it's not technically on the album.