You've Got Your Moondog In My Jazz 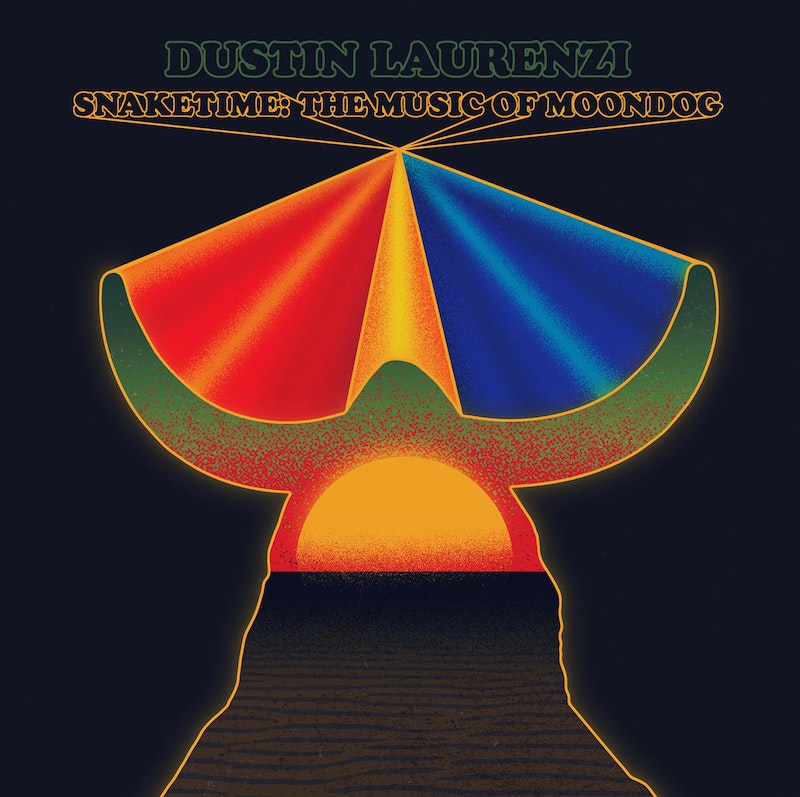 It's been a long time since jazz was popular music. Contemporary performers tend to be nostalgic for the era's glory days, or else avant-gardists entirely uninterested in accessibility. There's been some crossover with funk and hip-hop by performers like Esperanza Spalding and Kamasi Washington, but if I pick up a new jazz album I know little about, I expect it to be hummable or to be trying something new, but not both.

Chicago saxophonist (and sometime Bon Iver collaborator) Dustin Laurenzi's new disc Snaketime out on Astral Spirits is a pleasant surprise. The album features re-workings of songs by Moondog, a street musician who performed wearing a Viking helmet and a gigantic beard. Moondog was strongly influenced by Bach and minimalism as well as by jazz and the Beats; his classic 1960s albums are mostly short and tunefully fractured, with sophisticated counterpoint and a unique sense of structure.

Though Moondog was a fan of Charlie Parker and vice versa, he's a bit off to the side of the usual jazz canon, and that gives Laurenzi and his octet a chance to approach the tradition from a different vantage—one in which through competition, repetition, and melody are intertwined with more experimental skronk.

The album's first track, "Nero's Expedition" is based on a two-minute round with a strong Orientalist exotica component. The original sounds like a Les Baxter rewriting of "Row, Row, Row Your Boat." Laurenzi takes this quasi-novelty and turns it into a sinuous 7:45 minute grind and sway, with the spirit of that other great jazz self-mythologizer and spaceways explorer Sun Ra floating over the starlit caravan. Bass clarinetist Jason Stein blows sultry lines over Quin Kirchner and Ryan Packard's percussion and guitarist Dave Miller and bassist Matt Ulery provide a dissonant psychedelic background. The tune repeats with pop music relentlessness, even as the horns wander off towards freer exploration before returning into the gently undulating fabric.

Moondog’s "Lament 1 (Bird's Lament)" was a tribute to Parker, and the octet takes pleasure in running with the jazzy head. But they also hold onto Moondog's minimalist vamp. The result is a kind of Steve Reich bop, with the simple melody insistently insisting, while Laurenzi engages in a hard-charging, extended gutbucket solo that is more Illinois Jacquet than Parker. The song is both dissonant and fun, pulling together unexpected bits of jazz past to dance together at a very up-to-the-minute party.

Janis Joplin famously covered Moondog's "All Is Loneliness," dropping a powerhouse blues vocal in the middle of the song's eerie minor harmonies. Laurenzi's approach to the song couldn't be much more different. The octet stretches out the tune, so the melody turns into ambient washes, the horn lines wandering around as if trying and failing to find each other in some vast cavern. The vocal is mixed so far down you can barely hear it over the Native-American influenced percussion, while Laurenzi indulges in Coltrane-like explorations. For Joplin the phrase "all is loneliness here for me" sounds like a lament for a specific lost love. But for Laurenzi it's a more diffuse existential bereavement—the song's a spiritual quest for someone who isn't there.

I like "All Is Loneliness," but it’s less instantly accessible than some of the other performances. The shortest track on the album, "Remember," is the one that best captures Snaketime's appeal. The horns play a Thelonious Monk-like head, which goes pinging and honking about, chased by guitar and bass plinks. It could be an off-kilter background soundtrack to a video of baby ducks waddling and falling over. It's joyfully klutzy, right up to the last, wistful honk. Light-hearted, unassuming, and yet still adventurous, Snaketime doesn't change the face of jazz. But it manages to make the genre slither off in some delightfully unexpected directions.