Then they came for Morrissey. 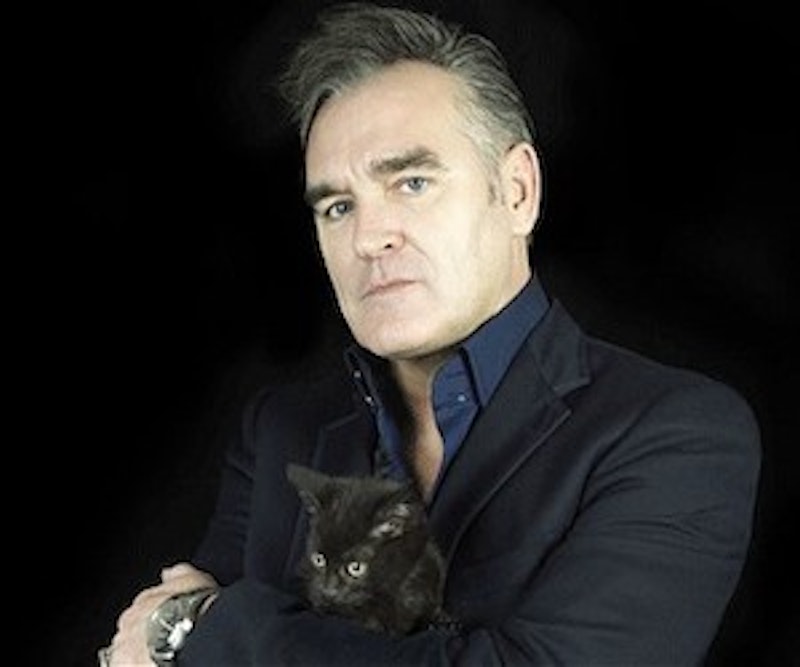 Plato, an authoritarian and communist rightly looked upon with suspicion by the people of Athens, thought that music, with its appeal to raw emotion, should be banished from the ideal republic as an irrational influence on political discourse. I oppose censorship, but he was onto something.

You’re going to end up disappointed if you expect people with aesthetic tastes like your own (reliably) to have political views like your own, and vice versa. Then again, if I like music or art that the left likes, the odds are the left will turn against it and declare it fascist within a few years, so maybe my aesthetic tastes are a good detector of non-communist material after all.

I figured I was on pretty safe ground in the eyes of the left by liking Morrissey and his band the Smiths back in high school, since he’s vocally gay, vegetarian, maudlin, and Thatcher-hating, but a few decades go by and, sure enough, he’s condemned by leftists for expressing fear of anti-gay radical Muslims. Last week, he briefly stopped a concert in Portland, Oregon because of a protestor in the crowd holding up anti-Morrissey signs with slogans including “Bigmouth Indeed” (“Bigmouth Strikes Again” being his best song; yes, it is).

He has also been criticized by at least one fellow rock star, the communist folk-rocker Billy Bragg, who says he has “no respect” for Morrissey. Bragg should’ve learned from the bloody history of the 20th century not only to avoid communism and fascism but also to give artists plenty of expressive leeway.

Maybe I’m biased because I saw Morrissey in concert in Queens last month, with Interpol, perhaps my favorite band of this century, opening (they met in an NYU philosophy class, you know) and Dan McCarthy, editor of the conservative magazine Modern Age, as my concert-going buddy. If all goes as expected, you can find my review of a book about the band R.E.M. in Modern Age’s imminent Fall issue (with further editing from Modern Age’s Samuel Goldman, who as it happens I interviewed way back in the late-1990s when he was a teenager with moralistic “straight edge” punk leanings, and I suggested to him then he sounded like he might end up a conservative).

R.E.M. hails from a different Athens than Plato, but they’re a reminder that music can affect one’s political sensibilities, for good or ill. In their case, I would probably reject many of their conscious political positions while applauding the unmistakable tone of empathy, gentleness, and thoughtfulness that pervaded their music even when the guitars got louder. In fact, I keep thinking they should’ve done a huge comeback tour about a decade ago when fey “indie” music, with its combo of banjoes and synthesizers, was at its 1980s-influenced peak.

As I get older, I’m not just nostalgic for the 1980s themselves, I’m nostalgic for 80s comeback fads. I have praised the New Wave kids of my youth (including in an essay in the anthology Proud to Be Right), but maybe I didn’t give gentle “hipsters” enough credit for their civility and artistry a decade ago. In middle age, I’m becoming such a former-English-major softy that I’m genuinely saddened to learn Morrissey nearly gave up on music at one point in the late-1970s after being in a few obscure teenage bands and was then rejected for a job at a Target store in a suburb of Denver during an extended trip to the U.S. How many musical geniuses have we lost to such mundane circumstances? All of those people, where are they now?

And yet: I will not let a few tales of the downside of our world’s semi-capitalist economy cause me to forget all of the wonderful things capitalism’s bounty provides. Without markets and easy travel between continents, not to mention increasing tolerance for eccentrics of all kinds, McCarthy and I wouldn’t have been able to enjoy that Morrissey concert (a mere half-century ago, going to that concert might’ve caused a mob to assume we’re gay and beat us, too). So, I can’t join McCarthy in applauding the fact some (often young) conservatives are now uniting against the purportedly hollow doctrine of individual liberty and markets.

And things on the right are getting even more anti-capitalist than that: A recent Guardian article notes the existence of some young believers in monarchism—in the U.S., mind you, not just in the UK where monarchists occur naturally. Are decades of Disney princesses partly to blame? Tolkien may have had some negative effects, too, much as I love him. Worse, some of the more hardcore alt-right and New Right types are growing fond of Bronze Age emperors and other barbarity.

Somewhere in between the gentle doubts about our crass modern world expressed by McCarthy and the Bronze Age desire to pile up the skulls of one’s enemies is the complaint recently tweeted by another paleoconservative-like writer, Michael Brendan Dougherty, author of the recent autobiographical book My Father Left Me Ireland. Dougherty was publicly outraged, at least for a few minutes on Twitter, that comfy portable chairs are becoming more common, since that presumably makes us all weaker and more demanding.

Why does he hate the human race, I can’t help thinking in response? Does he think his proletarian Irish ancestors (or mine, for that matter) sat around thinking, “I’m so glad I’m sitting on this hard rock—it builds character”?

I admit I walked all the way home from a reading by Dougherty still humming an old Irish song he sang at the event, but I would happily have hummed the song while using a personal flying craft if I had one, and I hope one day I will.