Stephen Sondheim winds down his career and gives us a summing up. 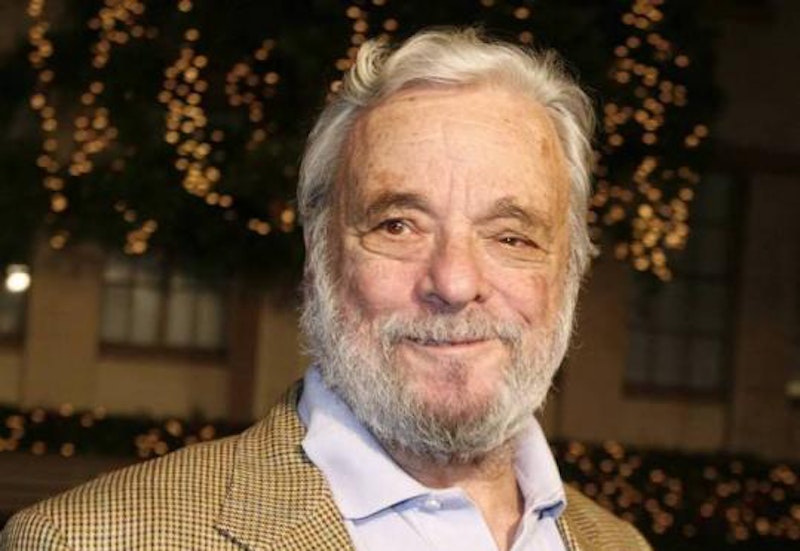 Stephen Sondheim began writing musicals about 60 years ago. Lately it would appear that he’s stopped. In March he’ll be 82, so maybe enough is enough. But it doesn’t feel like enough; more would be just great. At least we have a pair of books that present his collected lyrics and his thoughts on how they came to be, on how they were staged and performed, and on the theater world that made them possible. The first volume came out last year, and now Knopf has issued the second and last.

The new book is called Look, I Made a Hat and the subtitle, brace yourself, is Collected Lyrics (1981-2011) with Attendant Comments, Amplifications, Dogmas, Harangues, Digressions, Anecdotes and Miscellany. You may wonder why a book about songwriting is called Look, I Made a Hat. The title comes from Sondheim’s Sunday in the Park with George and in particular from the song “Finishing the Hat,” in which the artist Georges Seurat reflects on the pains and pleasures of craftsmanship. That sentence gives you an idea of why some people can’t take Sondheim and his work. For the same effect, consider the start of this one, about librettist John Weidman: “John had come to me with an idea for a show about the League of Nations, but interesting as it was,” and so on.

The League of Nations! Sondheim has also written musicals about or based on an Ingmar Bergman movie, the opening of 19th-century Japan, a 2000-year-old comedy by the Roman playwright Plautus, the history of political assassination in the United States, and the links between Grimm’s fairy tales and the development of the psyche. He’s a bright 19-year-old’s idea of a genius, but bright 19-year-olds aren’t always wrong. Sondheim is an authentic dazzler and deserves the adoration he gets. His words and notes are carefully chosen and brilliantly meshed, and he builds them into perfectly formed show biz structures that tower above Broadway and the musical theater in general. If he wants to deal in coffee table topics and arrive at weary upper-middlebrow conclusions (art is hard work, maturity is hard work, life is hard work and that’s why people kill presidents), then he can go right ahead. It’s not like he’s wrong about any of those points, and while he’s chasing them he turns out the greatest stage numbers since Cole Porter and Rodgers and Hart.

Or turned them out. Look is about the end of things. His first volume (Finishing the Hat, and never mind the subtitle) followed Sondheim’s career from his lyrics for West Side Story and Gypsy through the renowned and occasionally profitable shows for which he wrote the music as well as the words: A Funny Thing Happened on the Way to the Forum, A Little Night Music, Pacific Overtures, and Sweeney Todd, among others. Finishing it off was the beautiful but disastrous Merrily We Roll Along, one of Broadway’s great bombs. Volume two picks up as the composer-lyricist finds a new director and a new direction. Ending his partnership with Hal Prince, Sondheim falls in with James Lapine and heads Off-Broadway, where the pair give the world Sunday in the Park with George and Into the Woods.

Both shows had respectable runs, and the first provided Sondheim with a Pulitzer Prize. In his 50s, Sondheim had revitalized his career. But from there it was all downhill. He and Lapine created Assassins, a flop, and then parted ways after Passion, a flop that caused tryout audiences to shout rude things at the lead actress. The show, which came and went in 1994, was effectively Sondheim’s last. After that he poured most of his energies into a protracted ground war of a project that never quite became a viable production. In Look, I Made a Hat we get the complete lyrics for each stage of the would-be show, plus Sondheim’s ruminations on what went wrong and (sometimes) right.

The subject was a real-life pair of brothers who flimflammed their way into the upper reaches of polite society during the early 20th century. Their cynicism, frantic ingenuity, and love and hate for each other all marked the project as ideal Sondheim territory. In fact he had been thinking about it since he came across a New Yorker article on the pair back during the 1950s. After Passion, Sondheim assembled his collaborators and started work on another comeback. But something went wrong. With a rough version in place, they began tinkering and found themselves in a morass. “The tinkering took ten years, three directors, two out-of-town tryouts, a rotation of six actors in the leading roles, the writing of more than a dozen new songs, the discarding of more than two dozen, and we never did open on Broadway,” he writes with a certain weary aplomb.

Sondheim analyzes some of the mistakes, including the over-cleverness that comes along with his brilliance. For one thing, the show made him swear off fake vaudeville forever: “Using vaudeville to treat a serious subject is an easy pathway to irony—and using irony gives you an excuse to say anything, no matter how crass or banal or pretentious, and get away with it.” But the show’s missteps all have to do with story and staging and the dramatic function of the songs. The songs’ quality as songs was unimpaired, at least if we can judge by their lyrics. So if something has passed Sondheim by, that something is not talent. Nor is it even endurance, not after his wading through revamp after revamp. But something is gone and now he’s closing out his career.

Sondheim reflects that “superannuation” (his word) is the fate of all entertainers. If this ruffles him, he doesn’t show it. The notes and musings in Look reveal a characteristic degree of sardonic amusement and mild resentment, as when he discusses tryout crowds. But there isn’t any sadness. Critics have often said that Sondheim is too cold for his own good, but that’s a bum rap. He may be the only person who could write a moving duet for John Hinckley and Squeaky Fromme, as in Assassins’ “Unworthy of Your Love.” (Admittedly, it’s also a very funny duet.) He isn’t cold, he’s brave. He turned himself from a mother-tortured young neurotic into the avuncular elder statesman who presides with his beard over the modern musical theater. He did it through therapy and through excellence in his work, and in general he has provided a wonderful role model for people who have to get by with the Times’ “Arts and Leisure” section in place of God. I just wish he could write one more show.