Pitching a fit: Breaking down over the top 100 Tracks of the Year

Part one of a critical examination of Pitchfork's top 100 tracks of 2011 list. 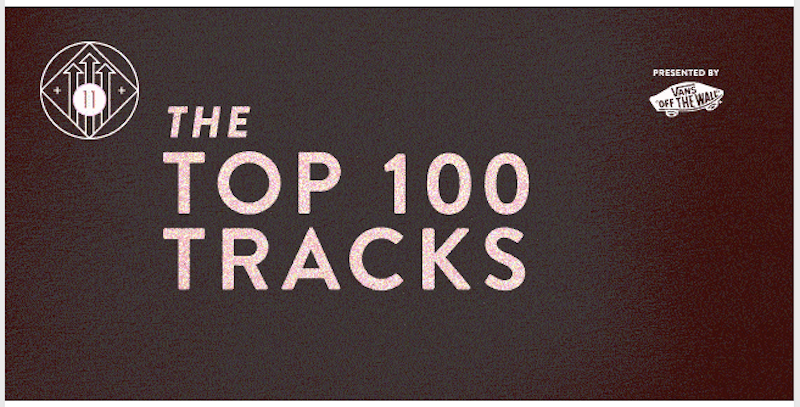 In the last meeting of our former record store employee support group, we talked about how nice it was not to be forced to read Pitchfork anymore. No one treats their words like gospel, but it’s certainly indie music’s biggest critical voice, and definitely has the power to affect sales. A “best new music” tag meant our store better order 50 extra copies, while a poor rating meant we might not even bother to carry something. Fun fact: Pitchfork founder Ryan Schreiber worked at the very same record store, and cut his teeth at the very same post (music editor at The Michigan Daily) as myself.

As with any cultural institution targeted towards the “cool kids,” Pitchfork’s become a target for the even cooler kids. So don’t take this column as some hipster-hating screed, I’m just trying to remind myself what’s relevant. I may no longer work at a record store, but if I’m going to call myself a music critic it wouldn’t hurt to see what some of my more prominent peers think are the best songs of the year. Or at least, that’s the attitude I’m taking now, before I embark on this mission; from the looks of the list and my lack of familiarity with most of it, I might come out the other end with a slightly different opinion.

100. Thundercat —“For Love I Come”: Alright! I’ve been meaning to pick up this record: my friend Miguel Atwood-Ferguson did the arrangements, and Thundercat is an incredible bassist. This is one of those records I’d advise you to buy 10 copies of, wait a few years, then flip them to Japan for a hundred bucks apiece. Off to a good start…

99. Ill Blu—“Meltdown”: Hmm, never heard of him. Them. It? Don’t think I’m going to find out; this is too close to dubstep for comfort.

98. Unknown Mortal Orchestra—“Ffunny Frends”: It’s not that I don’t like indie rock, whatever that is anymore, but it’s so difficult to wade through three thousand bands that sound the same. This isn’t bad; it’s just too affected for my tastes

97. Fever Ray—“The Wolf”: What is the occasion for this music? Burning Man?

96. Peaking Lights—“All The Sun That Shines”: Yes! Peaking Lights have been one of my favorite bands of the year. I’m happy they made the list, but this would’ve been in my Top 10.

95. Kendrick Lamar—“ADHD”: I’m also a Kendrick Lamar fan, who I highlighted in my halfhearted attempt at a rap list a few weeks ago (insert link). He’s got a bright future, and this song demonstrates his potential.

94. Sepalcure—“Pencil Pimp”: I don’t know why, but I was expecting metal. This is another new one to me, and while I’m not exactly an electronic music aficionado, I’m having a hard time hearing what makes this track so special. It sounds like a James Blake reject from three years ago.

93. Wild Flag—“Romance”: Hey, this is pretty good. I’d go see this band live; they sound like a lot of fun. Then I’d probably buy their record and never listen to it, but still, this is rad.

92. Jacques Green—“Another Girl”: Pleasant. Unremarkable, but pleasant. It’s funny, I get so excited about music and it’s the number one easiest thing for me to bond over, but sometimes I’ll meet someone who is equally enthusiastic but with completely different tastes. That person thinks I hate music. Also, sometimes I’m not so tactful.

91. Thee Oh Sees—“The Dream”: Another cool San Francisco band I ride for. Thee Oh Sees deserve the hype; this is another one I’d have a lot higher if this were my list.

90. Grimes—“Vanessa”: I used to get assigned albums to review, and it was sort of fun to be forced to come up with an opinion on something. I’m not sure I could even really do that anymore—music like this just makes me feel nothing, other than the desire to put something else on.

89. SBTRKT—“Wildfire”: At least this is resembles a real song, with an actual melody. I dig it actually, it sort of reminds me of a less radical Georgia Anne Muldrow.

88. Cities Aviv—“Coastin’”: I’ve been saying for years that smooth jazz was going to make a comeback, and in some ways, it has. This is hip-hop, but the sample is straight grocery store muzak. I don’t know, this is another solid, but unremarkable track. There was a lot of great hip-hop made this year that pushes the envelope, this sounds like the 600th best track from 1995.

87. Zoo Kid—“Out Getting Ribs”: I was into it until the guy started singing, but at least he sounds sincere. It’s hard to hate on something this earnest. Sixteen-year-old me would have loved this.

86. Blawan—“Getting Me Down”: Maybe I’m losing my grip, but how is this in any way special? It sounds like sped up early 90’s r&b over a poorly constructed, repetitive loop that someone slapped together in 10 minutes. This music has its place, probably some club in Europe, but is there anyone who listens to this by choice?

85. Junior Boys—“Banana Ripple”: I saw these guys open for Autechre when I was in high school. They were pretty good. If someone told me they were hypothetically opening for whoever I was trying to see tonight I’d hypothetically call the venue and ask what time the headliners went on and go grab a few drinks somewhere while I waited.

84. Iceage—“You’re Blessed”: There will be music made that sounds like this until the end of time. That’s comforting in a lot of ways. After all, banging on the drums and wailing on the guitar while singing out of tune harmonies is one of the purest joys you can share with your buds, and no one can take that away. Hey, these guys made it out of Mom’s basement.

83. Tiger & Woods—“Gin Nation”: Cute band name. I get that it’s hard to come up with a great name, but really all you have to do is avoid a horrible one, and let the music speak for itself. With a name like this, they’re already starting with a healthy dose of prejudice… and I can’t say it’s not justified. Boring.

82. John Maus—“Believer”: I don’t get it. This is awful. The guy can’t sing, the lyrics are unintelligible, there’s really nothing redeeming at all here. Drenching your vocals in reverb and owning a vintage synth doesn’t make up for having no talent.

81. Yuck—“Get Away”: With this, it’s not my thing, but at least I can see why someone would be into it. These guys sound like the small town Strokes. There are worse things to be called.

80. Fucked Up—“Queen of Hearts”: Now here’s a band people will still care about in 20 years, which is something I can’t say about most of this stuff. Even if you’re not into hardcore it’s worth given Fucked Up a chance. Better yet, go see them perform.

79. Kelly Rowland feat. Lil Wayne—“Motivation”: This is the first song on the list that you’ve heard on the radio. Over and over. It’s not a bad song (or a particularly good one)—it’s just funny to see it sandwiched in between Fucked Up and Sandro Perri. I mean, that demonstrates how patently ridiculous these lists as well as any of my smartass commentary.

78. Sandro Perri—“Changes”: Never heard of this guy, but this is pretty okay. It kind of reminds me of Sufjan Stevens, down to the seven-minute run time. I’d recommend it to your little sister.

77. Cults—“Abducted”: Man, only 23 songs in and I’m already suffering from severe twee fatigue. At least this song was less than three minutes long.

76. Juliana Barwick—“Prizewinning”: I like Juliana Barwick. Or at least, I think I’d like to, but the sheer arbitrariness of selecting this song is mind numbing. I am currently listening to the song and I couldn’t tell you one single lyric from the thing. I’m drinking coffee, in a bar, and I’m about to fall asleep sitting up.

75. Washed Out—“Amor Fati”: Here’s where I admit that my only real source for indie rock is thefader.com, and that sort of stuff is only a small portion of their coverage. I’m generally inclined to like whatever they’re into, but this is a band they’re pushing that I’m just not all that enamored with.

74. Dum Dum Girls – “Wrong Feels Right”: I can’t quite put my finger on it. The Cranberries? Whoever sang the Friends theme song? This is another band that seems like they’d be cool, but this song is like the worst parts of REM meets the worst parts of The Pretenders.

73. Tuneyards—“Powa”: Now here is an artist I wouldn’t normally expect myself to like—quirky, ukulele, loops, weirdly formatted name (which I refuse to learn)—it’s hard to pull that off, but this lady does it. Though again I have to say, I don’t like this song all that much. Still, at least this is different and fresh.

72. Britney Spears feat. Nicki Minaj & Kesha (Femme Fatale Remix): Why, why, why? I couldn’t even handle 30 seconds of this. Nicki Minaj, you are trying so hard to destroy any shred of credibility you may have once had. Is it really worth it? The answer to that question is pretty depressing.

71. The Men—“Bataille”: Okay, I’m sorry I’m still wondering how in the world that last song made this list. Is it some weird attempt to appear to seem anti-snob? I just don’t even get who they’re even pandering towards, and you can not tell me that anyone thinks that song has any substance whatsoever. As for this song, it’s like lighting a match—it burns briefly then you toss it in the trash, or you know, delete the mp3.

70. Holy Ghost—“Jam for Jerry!”: I like disco. I like disco made in the late 70s, early 80s, mostly boogie—there’s definitely some funky disco out there, so I’m not trying to hate on an easy target—but my god why in the world would you be making disco pap like this in 2011? Shakes head in disgust.

69. Neon Indian—“Polish Girl”: I have heard Neon Indian songs I like. This is not among them. This is like dance music for the most pathetic club ever. I’m imagining a bunch of people awkwardly fidgeting while some gothy dude “spins” songs off his iPod, bros hitting on undergrad girls who haven’t figured out that not every guy is a douchebag, and at least one couple on the verge of a breakup. This is probably happening in Berkeley as we speak. I’ve got no love for that place.

67. Rihanna feat. Calvin Harris—“We Found Love”: I’m pretty convinced Rihanna is a robot. She sounds like a robot. Consequently, I feel nothing.

66. DJ Quik—“Killer Dope”: A nod to a legend. I’ve got nothing but respect for DJ Quik; this is as good as anything in his generally excellent catalogue, and as good a place as any to take a break before diving into part two. Lord knows I need it.