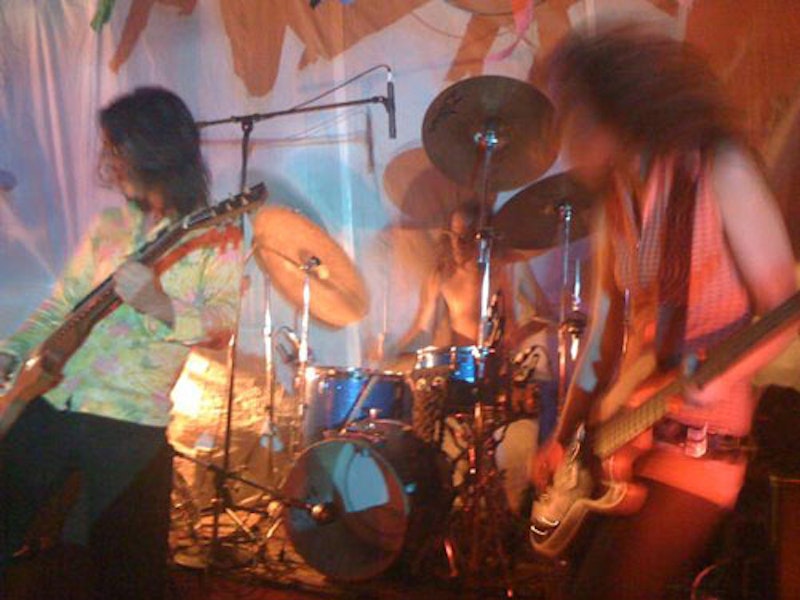 White Hills is the kind of band that refuses to be pigeonholed; the duo—sometimes trio—literally do it all, short of opera, country, rap, or orchestral, and I wouldn’t be surprised if those elements find their way into their craggy, driving rock action someday sooner than later. Principals Dave W. and Ego Sensation unroll galvanizing admixtures of psych, stadium rock, Krautrock, noise, and experimental abstraction as though they’ve been scrambling omnivorous synapses for decades, even though they’ve only been in business for a few years. Dave W. shared aspects of the band’s origin and philosophy in an email interview, just before the band went out on the road to promote new album Hp-1 (Thrill Jockey).

SPLICE TODAY: How did the two of you meet, and how did White Hills come to be?

DAVE W.: Ego and I met in San Francisco at Recycled Records on Haight St. We had a mutual friend, who was the drummer in Ego's band at that time. White Hills came to be out of my dissatisfaction with the bands I was playing in at the time. I had been in NYC for a few years piddling around trying to start my own thing and playing guitar in some other bands around town. I kept on finding myself in these punk-n-roll outfits. One day I decided to buy ProTools and I set out to record an album of music that I wanted to make. Nobody in NYC at that time was interested in playing Space Rock or Psych music, so I recorded the album by myself without any intention of actually forming a band. It was just an outlet for me to do what I really wanted to do. Once the album was finished I sent a copy to Julian Cope, who loved it and asked if I was interested in having him release it on his Fuck Off & Di label. I, of course, agreed. Then, from the overwhelming positive reaction to the release, I decided that I should put a band together. Not much later than that we found ourselves opening up for Julian Cope at KOKO in London; it was only our third show.

DW: We are based in New York City; Alphabet City to be exact.

DW: This is my day job. Anything else is just a means to make ends meet.

ST: Your music runs a pretty wild gamut, from driving rock to metal to noise to psychedelic space jams to experimental, abstract pieces. What artists do you consider influences?

DW: Musically, especially for the new album: Einsturzende Neubauten, Virgin Prunes, and James T. Pursey, to name a few. Lately: anything abrasive and truly psychedelic. And by that I mean stuff that literally makes you feel disoriented. Hawkwind is a big influence, as well as German bands like Harry Chapter, Neu!, Amon Duul II, Klaus Schultze, and Popol Vuh. For the new album, more so than musicians or groups I found inspiration in Abstract Expressionist art. While mixing the album I found myself painting abstracts to clear my mind and get me to think differently about each song. It was extremely helpful in opening up my mind to more possibilities within each track and looking at creating music in a completely different way.

ST: The Antrohny remix of "Oceans of Sound" is amazing. How did this come about? Are you considering more remixes in the future, and if so, whom would you commission?

DW: Antronhy is an old friend and drummer with White Hills. We were introduced to each other by Julian Cope. When we opened for Cope in London back in 2006, our drummer at the time could not do the show, so Cope hooked us up with Antronhy to take on the drum duties for that night. We all hit it off instantly and have been great friends since. He has also done two different European tours with us. Antronhy was the one who initiated the idea of remixing some tracks. He has done a number of them from almost every record we've released. We've been toying with a WH/Antronhy remix album; we'll see if it ever comes to be.

DW: On the new record we have three different people playing with us. It's mainly Lee Hinshaw—who is our touring drummer at the moment—but the track "Paradise" is all Kid Millions, and the tracks "Movement" & "Monument" are Lee, Antronhy and Kid all playing together.

ST: What's the White Hills writing process like? Do songs emerge from jams, or do you approach elements that you come up with separately and develop them into full pieces?

ST: I notice that when David [Halstead, Thrill Jockey publicist] sends out emails about the band, your real names are never mentioned. Why the secrecy? Is it to maintain a sense of mystery or intrigue?

DW: Dave is my real name and W is the first letter of my last name, but I don't see the need to use my last name. “Dave” is a generic name, and how more generic sounding can you get than by just using the first letter of your last name? There is so much emphasis, in the entertainment industry, on creating an image around a face, something that is tangible. Referring to myself in the way that I do makes me become faceless. I could be any Dave W. It is the antithesis of what people usually do in this industry. White Hills is not about my face or anyone’s face that is involved in this project. It's about what we create and the images that people tag onto our creations. Yes: it does add mystery.

Why not secrecy? It seems that the entertainment industry is all about creating "reality." That's a bunch of bullshit in my opinion. What people think is real is just manufactured kack to get people to believe it's real. How White Hills presents itself is very calculated. I want people to create their own vision in reference to our art - in the same way that one does when reading a book. Mystery is a good thing. It allows the viewer to create their own images to the medium, which in turn makes that creation a personal thing for the viewer. It draws them in to your art in an active way, not a passive one, like TV does.