The last Whartscape is over... what will become of us now? 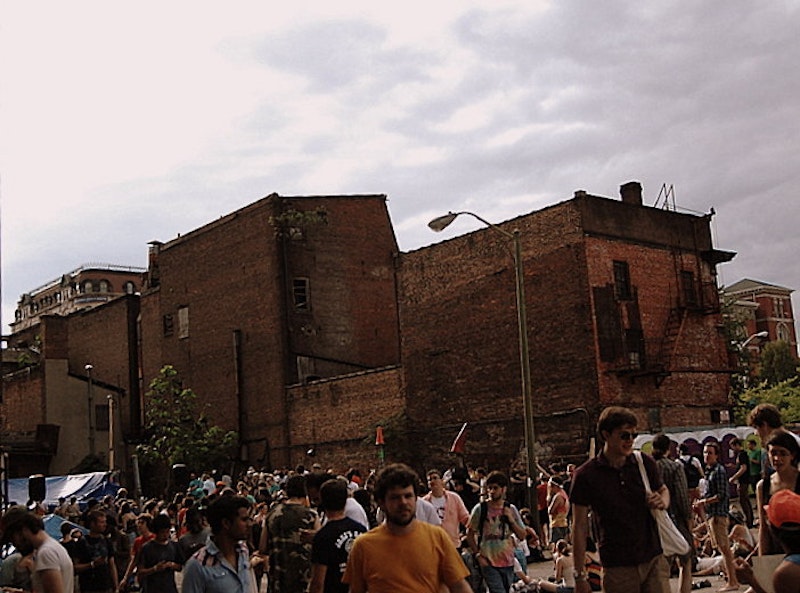 Baltimore’s Whartscape is over. After five years, Wham City is letting the festival die, killing it off before it can grow any further. They're letting it go out on top: this year, the party attracted around a thousand people a day across four different venues, with more than 120 performers last weekend. Whartscape was organized into theme days: on Thursday, theater, video, and performance art; Friday, dance and hip-hop; Saturday, loud, explosive music; and Sunday, a day of gentler music. Not everything worked as planned, and not everyone who was supposed to play did. Nonetheless, Whartscape felt massive, and as near to complete as a festival of its size and budget could manage. With reunion performances from legends Arab on Radar, Oxes, and Universal Order of Armageddon, and sets from dozens of influential and exciting contemporary acts, the weekend was comprehensive, a wide survey of Baltimore's experimental music scene and a sampling of like-minded out-of-state artists. It seemed that all genres it were represented, and the diversity of the performers kept things hopping throughout the four days.

Thursday's theater/video night was mostly filled with the kind of stuff Wham City gets grief for: goofy, "quirky" comedy bits and sketches that often feel like nothing more than a bunch of words strung together, lacking context and substance. Aside from the occasional gem (Robby Rackleff's Blue Leader, Adam Endres' audience participation act, and the Ram Ones), this kind of performance art grows old fast and breaks no new ground. A Q&A with Fugazi frontman Ian MacKaye turned confrontational when an audience member asked MacKaye if he "wanted to smoke a bowl," to which the straight edge MacKaye replied, "Fuck off, you fucking nerd" and flipped him off. I left shortly after, opting to miss Mink Stole's lecture to get some rest for the long three days ahead.

Friday, Saturday, and Sunday took place at the parking lot behind the new Current Space during the day and within the multiple floors of the H&H Building at night. Three consecutive 14-hour days of music was exhausting, and by Sunday morning I was unsure if I'd make it out again. Fortunately, this year much of the fat was cut from the lineup, leaving mostly great or at least interesting bands and few of the annoying garage bands high on humor but not on music. Eric Copeland leveled the audience in what might've been the best set all weekend, fusing a noise sensibility and infectious funk-like beats to create an otherworldly form of dance music, an outer space boogie. DJ Dog Dick followed, debuting several new songs that demonstrated his continued interest in experimental hip-hop and the mythology of Baltimore's West Side ("Frederick Ave., Pratt St.—when the speakers start to beat you better hop up on your feet, and kick it").

Saturday’s explosive lineup of rock bands was either well- or ill-suited for the extreme heat, depending on how you look at it. Nolen Strals of Double Dagger and Max Eisenberg (DJ Dog Dick) both gave impassioned, heartfelt speeches about Whartscape and Baltimore (respectively), yet none of the sentimentality or abundant emotion of 2009’s fest was present this weekend. Dan Deacon let the festival speak for itself this year, skipping a planned speech, content that everyone was having a good time.

Torrential rains curtailed Sunday’s outdoor portion early in the afternoon, but most of the bands were moved to the Sonar Lounge for a free show. Here we got to see one great band after another, with Lower Dens, Wye Oak, and Deacon all delivering very impressive sets. I left during Celebration, a band I’ve never liked, to escape the rock club atmosphere that Wye Oak singer Jenn Wasner bemoaned just a couple hours before. It was too bad that Whartscape’s day of rest had to be moved inside, but they made the best of a bad situation, and ultimately only one band had to cancel (Xiu Xiu, supposedly due to an asthma attack).

After last weekend, it’s clear why Dan Deacon and Wham City want Whartscape to die. It’s reached critical mass, and without accepting sponsorship from cell phone companies or Budweiser, it can’t really grow any further, and to top this year’s lineup would be unlikely. Over the past five years, Whartscape has grown into a behemoth, an annual culling of Baltimore’s underground musicians with a selection of touring artists that shows off the sounds of today. It can’t be overstated: Whartscape 2010 was a massive accomplishment, organized and run almost entirely by a small art collective that often seems like they don’t really know what they’re doing. For the past five years it’s been a testament to the DIY mindset, but perhaps most importantly it was a festival filled with over a hundred great, groundbreaking artists with no security, no sponsors, and a real sense of community. Whartscape doesn’t really have any equals, and as it was, it never will. Whether or not there will be a festival next year is unclear, but it’s up to others in Baltimore to fill the void Whartscape has left, to find something with as much meaning and excitement.