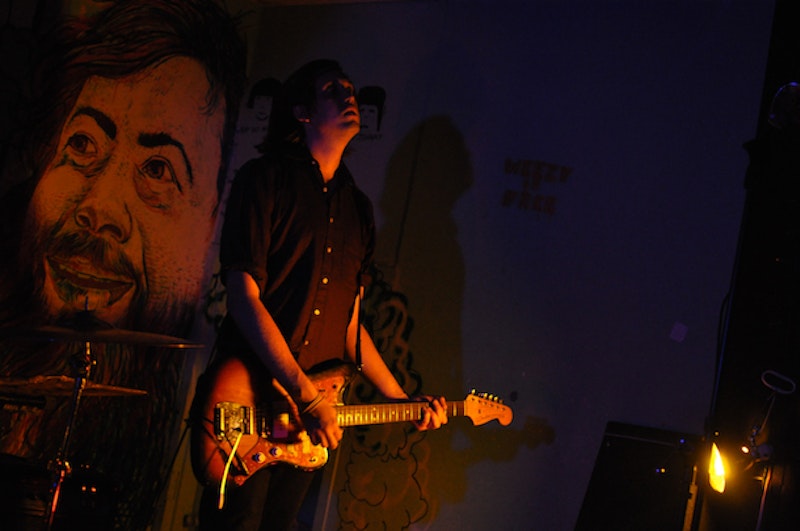 The titles of Pop. 1280’s 2010 debut EP and 2012 debut LP are as tire-iron blunt as they are sociologically instructive: The Grid and The Horror (both Sacred Bones). The sound – a managed-chaos smash-up of caveman drums, radon-scented keyb vamps, and guitar figures codpiece introverted and charnel-house charred – is brutalist in a vaguely accessible way, punk and pig-fuck and synth-pop run riot, looting, ransacking, and burning midtown boutiques together.

Trashy, vexing, and propulsive, the Brooklyn foursome bang out party-hard anthems for off-the-books transactions in red-light district alleys and squat-house squalor interludes, narrated by frontman Chris Bug. If Craig Finn is your embarrassingly candid drunk uncle and David Yow the disheveled condominium wino handed a microphone, Bug’s the sawed-off ass clown who solicits coked-up young things for SuperSize-kink rendezvous via Craigslist, beats off to Porntube when nobody bites, and when all else fails, howls his miseries into busted microphones.

Grid wryly beckoned “welcome to the grid,” evoked the cyberpunk urban sprawl of Blade Runner, and showed us terror in a handful of angel dust; it isn’t too huge of stretch to think of Horror as Grid with a limp, a beer belly, and a mean streak. Desperation – as celebration, as epidemic, as ecstasy, as all three at once – abounds, and pounces. “Nature Boy” – between this and “Crime Time,” these guys have gotta be WWE fanatics – boils with psychosexual, gun-fetish lunacy even as it references Rage Against The Machine’s rapid-fire rhythm-funk and charging raps on the verses and lurches into turgid, wrenching gulches on the choruses. The chanted, titular refrain of “Bodies in the Dunes” imagines end-of-days skullduggery or kidnappings gone bad, the warped, corkscrewing blare and sheet-metal clatter ratcheting massaging ennui into doom. The lead off lyric on this album is “Two dogs fucking,” while the serrated noise-grunge of “Dogboy” tenses and yanks like a leashed collar that’s constantly constricting.

It’s not so much that the end is nigh than that the end is now, if you like. Bug’s bulging neck-vein bug-outs often feel less like portents of things to come than warped mirror perversions of our present-tense – as if by exploring exaggerated or cartoonish representations of what’s understood as normalcy and yoking them to scorched-Earth synth-punk, it might be possible to stoke discussion about what we are, about where our humanity ends and our baser, more animalistic instincts begin. Can we set self-delusion aside and embrace reality? When does satiation become exploitation? Who will survive in Ron Paul’s America? Which one of the men in this room is a replicant? How was the shattering note effect that’s all over “West World” achieved? Where can I score an oil barrel for my drum set-up?