Tom Waits Songs I'd Like to See Made Into Movies

Sure he sings, but what he really wants to do is direct. 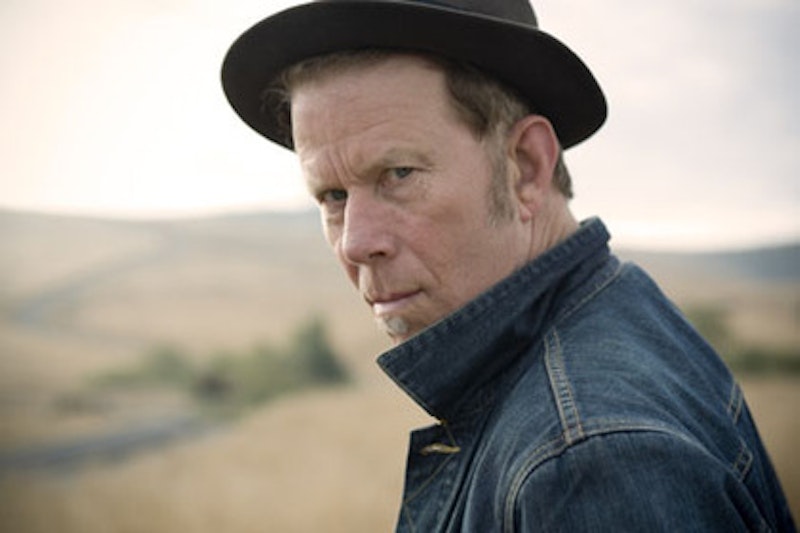 Music fans of all ages adore Tom Waits for his endless musical experimentation and his rock tumbler of a voice. For an unapologetic weirdo he’s very popular. Last year’s Orphans: Brawlers, Bawlers and Bastards sold well and contained almost no dead wood, surprising for a triple album with 56 songs. I bought my first Tom Waits album (Heartattack and Vine) because I had heard his amazing “Three Sheets to the Wind in Copenhagen” on the soundtrack of the movie Basquiat. Heartattack and Vine took a long time to grow on me—it’s one of Waits’ transitional albums and most of the songs sound like they came out of a piano bar. After a while I got to like Waits’ bandsaw delivery and gin-soaked sound, but it took me a while to catch on that Waits also tells an excellent story. His songs create malformed little worlds, sometimes a noirish cityscape, sometimes a lurid carnival fantasy out of some sinister sepia playbill. Many of Waits’ songs, I think, would make great movies. I will on occasion suggest directors or movies similar to what I would envision—this will reveal my bland taste in movies, but undoubtedly Splice Today’s readers will educate me.

“Cold was the night and hard was the ground/They found her in a small grove of trees,” begins Waits’ lachrymose ballad of the lonesome death of Georgia Lee, a girl who slipped the bonds of her school and family and died alone. Georgia’s mother Ida is powerless to stop her from slipping away. The chorus asks why God wasn’t watching out for Georgia Lee, but Waits implies that perhaps he was—the song dwells on the transcendent beauty of the natural landscape into which Georgia fades. The last verse ends “Somewhere a baby is crying for her ma/as the hills turn from green back to gold.” I’m seeing something along the lines of Terrence Malick’s Days of Heaven, a dreamy, pastoral story with an iron soul.

If you haven’t heard this song get it and listen to it right now. This is Waits as his absolute best, growling over a sour violin—in fact, the whole cabaret-tinged album is amazing. Two more things about the song—it comes from Waits and Robert Wilson’s opera based on Alice’s Adventures in Wonderland, and it is based on the supposedly true story of Edward Mordrake, a minor British noble who had a face on the back of his head. Waits describes it succinctly: “The face could laugh and cry/it was his devil-twin/at night she spoke to him of things heard only in Hell.” Eventually the face’s chthonic whispers drive Edward mad, and he hangs himself from a wrought-iron balcony. There’s a complete story there, of course, but this could go in a number of directions—the face could turn into a psychological metaphor, or it could remain a horrific supernatural affliction (and perhaps we could find out what exactly it’s whispering). I could see David Lynch making hay with this one.

Here’s a little change of pace—the protagonist of this song isn’t exactly a deformed, hypersensitive Victorian boulevardier. “I spent all my money/in a Mexican whorehouse/across the street from a Catholic church,” he begins, and that’s most of what you need to know about him. This song’s tough-guy hero spends his time in Las Vegas, boozing and screwing and threatening to burn down buildings, but he’s got a slightly wounded side as well: “You got to tell me, brave captain, why are the wicked so strong?/How do the angels get to sleep when the devil leaves his porch light on?” he asks. Violent, small-time thug who keeps losing at slots and wonders about good and evil? Sounds like most of the movies about Las Vegas, or maybe some kind of Streets of Fire-style parable.

This tango-infused number is a little more metaphorical than the previous three, but like all good tangos it has a dangerous woman and a clueless man. “She left in the fall, that’s her picture in the wall, she always had that little drop of poison,” goes the chorus. It’s open to interpretation, but it sounds to me like the narrator and the woman got into some trouble with some local criminals; the narrator had to stay and the woman escaped—“Well a rat always knows when he’s in with weasels/Here you lose a little every day.” Something like an inside-out History of Violence, but good instead of creepy and irritating.

Waits sings hoarsely here alongside a hypnotic drum-and-marimba rhythm section—the story is of a veteran (a doughboy, so it’s WWI) who comes home “with a party in his head,” takes up with various women, drinks, tours through California high on Benzedrine, then gets sent to jail in Oklahoma (possibly for sleeping with an underage girl). Mr. Waits, you’re doing my silly, self-indulgent job for me! He packs in enough weird little details (the soldier’s car, plenty of specific drinks) that an adaptation would have no shortage of vignettes.