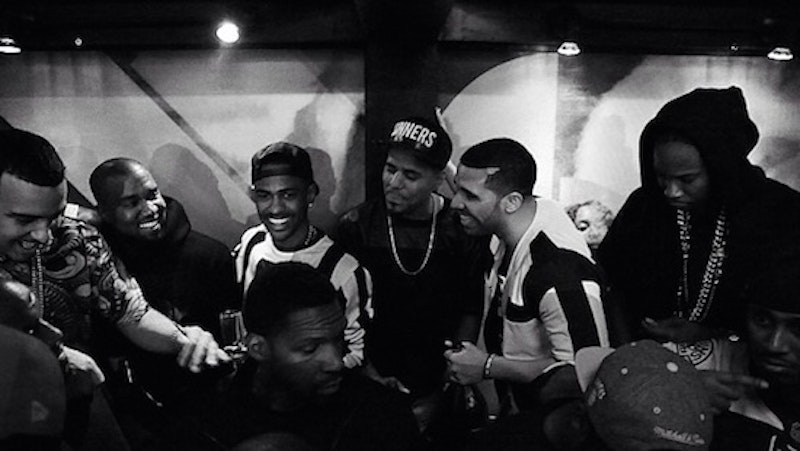 Every verse Big Sean raps is a provocation—in form, if not in content. There’s heavy affectation to what this Detroit MC does, as if he’s simultaneously rolling his eyes and pulling a face and expecting the same from anyone who happens to be listening along at home. There’s the sense that, somehow, he’s running the stresses back and forth along each 16 like a bead on an abacus—a disorienting tic that has the effect of lending a certain lunacy to whatever happens to be on his mind at a given moment, so that he resembles a schoolyard bully more intent on intimidating via sheer psych-out than by physical violence. Whether this is novelty or a sustainable model remains to be seen, but “Blessings”—love that pensive string-section beat, courtesy of the abominably monikered Vinylz—is nonetheless impeccable, expensive status-update event rap: Big Sean laying a dizzying come-up-cum-louche foundation for the rest of the forthcoming Dark Sky Paradise, Drake phoning it in, Kanye spitting an airtight, mismatched portmanteau.

“Slaughterhouse Overdose” comes riff equipped, but those riffs—there are a couple, and they’re repeated—are shrouded in fuzz, distortion, feedback, with singer/guitarist Filomena Rubino’s voice creeping through the melee like ectoplasm emerging from a sewer grate. The chief byproduct here and on the rest of the Sucker Mule's Dreadful Murder LP is mood, a sort of crowded psychological fog illuminated by pulsating red lights. It’s tuneful, succinct, and foreboding without being necessarily spine-tingling on the level of some of its predecessors—Sonic Youth being first to spring to mind—though I imagine that in a live setting the impact might be heightened.

Some would argue that electronic music—as a single, heterogeneous entity—is inherently war-like, a natural sensory onslaught. But that’s an outsider’s knee-jerk perspective, which is why some insist that hip-hop or noise music or punk songs “all sound the same.” Ha! Bouncy, hard, and jittery, “Junkies on Hermann Strass” thrives on roughly five or six levels of conflict, as though the sonic equivalents of a handful of Battlebots were caged and encouraged to slug it out to the death. Pounding bass drums are the baseline, intermittently consumed by cymbal shimmer, buzzed by portentous synthesizer chords, and roundly assaulted by a jeering, jarring effect that made me think of Sneetches in flight or electric hair clippers wielded in a socially irresponsible way. There are moments where you’ll swear there are demons lurking in the mix, beckoning.