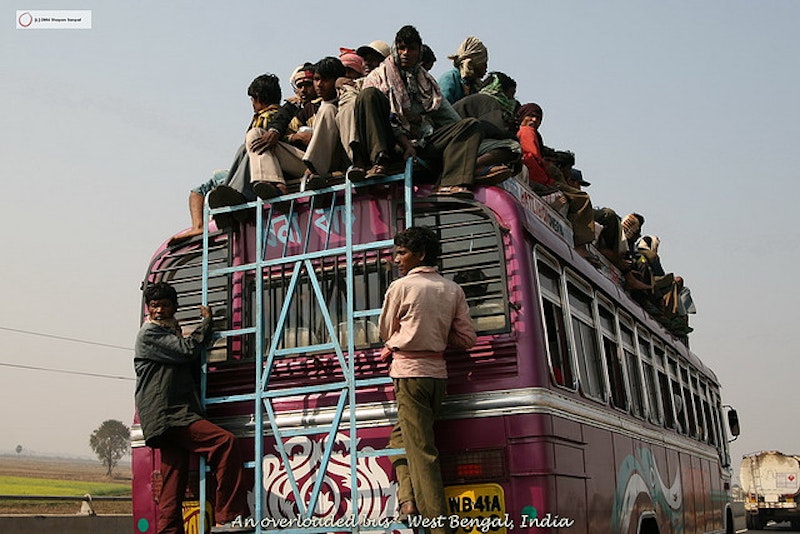 The title, then, is something of a gag, though of the half-serious kind. The impressive booklet included with the CD includes subheads like “Course description” and “Learning outcomes” and suggests that “While not required,” those taking the course would benefit from “a working knowledge of Indian history from the Mughal Empire in the 16th century to the British colonial period—the end of which, of course, coincided with the birth of many of the Indian Psych Funk pioneers included on this compilation.”

So far, so cute.  A little too cute, in fact. The booklet is self-consciously tongue-in-cheek in its anthropological pretentions, but that doesn’t make the pretensions any less pretentious or any less anthropological. They may joke about their scholarly approach, but the approach remains scholarly, complete with biographies of important figures, careful annotations of each track putting it into historical and musical context, and a ton of artwork from the period that must have been quite a job to track down.

None of which is wrong, obviously. And yet there’s something about the careful hipness and hip carefulness that I find a little off-putting. Many of the tracks here are by mammothly enormous stars—R. D. Burman, Asha Bhosle—from the most densely inhabited segment of the globe. This is popular music with a capital pop. It’s like putting together a compilation of tracks by Taylor Swift and Ke$ha and Lady Gaga and then saying, hey, this is a wacky seminar! It’s fun…and it’s good for you!

But such is the Columbus-like experience of world music crate diving, in which you compulsively pat yourself on the back for discovering that obscure fruit off which some significant proportion of the world’s population was already living.
And yet the fact remains, even though a lot of people already know about it, it’s still new to someone. In this case, me. I certainly knew who Asha Bhosle was, and I knew some 70s Bollywood, even so all of this compilation was new to me. And it’s great!

More than that, it’s great in part because of the obsessive annotation. It’s embarrassing to admit, perhaps, but I didn’t catch Bappi Lahari’s flagrant and hysterical lift from “In-A-Gadda-Da-Vida” until the liner notes pointed it out to me—and you can’t truly appreciate “Everybody Dance With Me” until you realize that Lahari is performing Iron Butterfly as if they were the Kingsmen. Similarly, I’d heard Asha Bhosle sing “Dum Maro Dum” a time or two, but somehow never realized that it was about smoking dope—a factoid that definitely adds a certain something. As, for that matter, does the information that she was soon to be married to R.D. Burman, who joins her on the track.

So it goes throughout the album. Would I have noticed the Vegas-meets-free-jazz-while-being-cheered-on-by-spasticly-burping-keyboards in Burman’s insane “Freak Out Music” if the liner notes hadn’t singled the track out for me? Would I have been as thrilled by the heavy garagey lounge groove of German saxophonist Klaus Doldinger’s “Sitar Beat” if I hadn’t been told that the sitar player was also responsible for the Vampyros Lesbos soundtrack? Would I have tuned in to Usha Khanna’s contemplative, droning “Hotel Music”—complete with swinging trumpet outro—if I hadn’t learned that she was one of the few female composers in Bollywood?

Maybe. I’ve certainly got lots of compilations that don’t provide a ton of information. I don’t need to have things spelled out for me in order to enjoy an unfamiliar genre. But it doesn’t hurt to be given a little bit of orientation either. I wish the information could be provided without suggesting that it was particularly esoteric. But then, don’t I think I’m kind of cool for being interested in Bollywood, even despite the fact that scads of my hipster peers have been there before me? I’m in the room, I’m taking the course. It’s not clear what practical difference it makes whether I’m smug about that or smug about knowing that it’s kind of icky to be smug about that.