Warming up for more established and popular bands is a privilege for a new act, but there are some drawbacks. 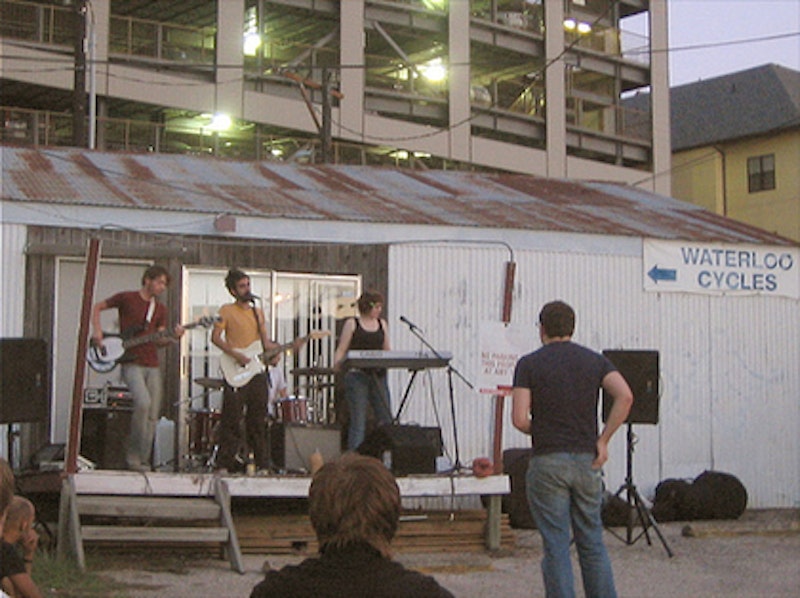 Playing first sucks. You get excited to be opening a show, possibly with some (relatively) big name bands, thinking you'll pull a big crowd. It never happens. You're always left sitting around the stage, waiting for people to show up. In a flash, it's 8:45, and you're supposed to play at nine. You see a couple stragglers leaking through the door, getting marked, and just like that they're out of there. "Headliner's not playing 'til 11? Let's go get something to eat." Only at the biggest of shows, where early entrance is a must for a guaranteed good spot in the crowd, will you see people come at eight and stay until midnight. But if you're playing a show that isn’t selling out or even two-thirds full, people just don't care.

A couple of weeks ago, my band Engine played at the Metro Gallery in Baltimore with Wye Oak and Pattern is Movement. Wye Oak (formerly Monarch) has a huge fan base in Baltimore that’s grown rapidly in the past year. They’re being courted by Pitchfork and their debut album was just re-released on Merge Records, a label that’s also home to Destroyer, Arcade Fire, and the late great Neutral Milk Hotel. I figured this well-deserved success, as well as Pattern is Movement's similar popularity in their hometown of Philadelphia, would get people in the door before nine. Although the crowd was decent, the lion's share of people showed up after we played.

We had played a show at the club Ottobar with a headliner of similar popularity (Syracuse, NY's Ra Ra Riot), and the crowd was even thinner. Every band has a beginning, and ours was great: believe me, there are no whines from this corner, and it’d be arrogant and presumptuous to expect to sell out a 300-plus capacity venue within a year of starting a band. We played an outdoor show in northeast Baltimore in mid-May, and the people that were there were more frightened than thrilled. Even so, we had a great time, and the last thing I want to do is complain about it. It’s simply a comment on the structure and status of shows in this city, and I imagine others as well.

Part of the problem is that in Baltimore, shows generally start late (although compared to New York, we’re hardly night owls). The amount of people who want to go out, drink, watch a show, and then drink more vastly outnumbers the people who just want to see a show and be home before midnight. Obviously more adults over 21 make up the city's nightlife than teenagers, but shouldn't there be some kind of compromise here? It's a real bummer when you realize you need to leave in 10 minutes and the band you came to see isn't playing for another hour. Sometimes it makes the entire experience a waste. I get to see three bands I couldn't care less about and not the band I came to see in the first place; things like this make going to shows in Baltimore a real drag sometimes, especially when you're under 21.

You're never going to get an entirely appreciative crowd if you're playing first and early. It's just not realistic. People came to watch the headliner, and not you. This is a good thing to remember. No one cares about you except your friends. You may make some people pay attention and even get excited, and that is usually what I try and do: this is how you build a reputation and a fan base. Everyone needs to start somewhere. But you keep your head out of the clouds. Ninety-five percent of the time, people are going to be bored by your set. They don't want to see you; they want to see so-and-so. And this is what makes it so hard to be a fan and a performer. You have two completely opposing mindsets. One part of you wants people to come early and stay to see you play, but the other half of your brain wants the headliner to play first and for the venue to cut the rest of the bands. But I know I'm in the minority here. I'm not allowed to drink, I don't drive, and I usually need to be home by midnight. Ultimately, in a few years, this problem will go away, but for now, it's just a drag