The Long, Slow Downfall of EMI

Another major record label loses its talent and its profit margins. 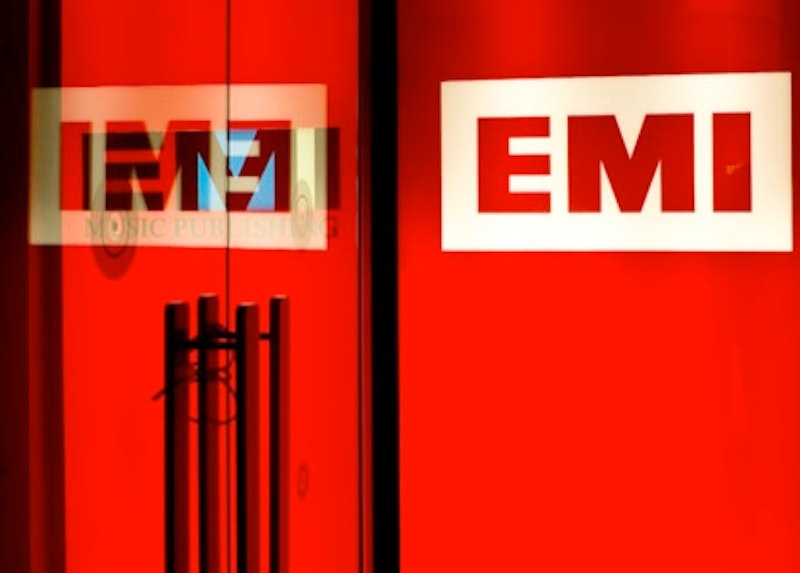 “Unlimited supply,” keened Johnny Rotten on the Sex Pistols tune “E.M.I.” as the group made its brief stop on the British label in between A&M and Virgin/Warner Bros. But EMI—home over the years to everyone from the Beatles to the Rolling Stones, David Bowie to Radiohead, and Boys both Beach and Beastie—has long since exhausted the supply of patience by artists and creditors alike, and may be on the way to the junk heap.

The latest nail in the coffin came with Monday’s announcement that Queen is leaving the company after some 40 years to sign with Universal Music, joining such other high-profile defectors of recent vintage as Radiohead, Paul McCartney, and the Stones. Thus, outside of North America (where the band’s stuff is already available on the Universal-distributed Hollywood Records), Universal’s Island Records will be responsible for the impending 40th anniversary re-masters of A Night at the Opera, News of the World, and The Game, and led the group’s guitarist Brian May to enthuse: “We are very excited, after all this time, to be embarking on a new phase of our career—with a new record company, with new ideas, and new dreams.”

May didn’t come right out and say “new music,” which may be a blessing for anyone who viewed 2008’s would-be comeback album The Cosmos Rocks—officially credited to “Queen + Paul Rodgers”—with anything beyond bemused skepticism. Queen without singer/songwriter Freddie Mercury, who died in 1991, is roughly like the Stones without Mick Jagger; you can do it, but why would you want to? (Bassist John Deacon, at least, has had the decency to sit this one out.)

Queen already did the re-masters route back in the early 90s, when their catalog came out on Hollywood, but the new deal will probably mean lots of other previously unreleased versions, live albums, and of course the inevitable compilations. There will also be a tie-in album to the Mercury biopic starring Sacha Baron Cohen—which will almost inevitably suck—but how else do you go about expanding the sales reach of a catalog that’s already surpassed 170 million worldwide?

The band’s loss was “another blow to EMI,” according to the Reuters headline, but the company’s been too busy hemorrhaging money, market share and talent for the past decade to probably notice much. On Nov. 4, the piquantly named Guy Hands, founder and chairman of private equity firm Terra Firma—which acquired EMI in 2007, when it was already on the ropes—lost his attempt to sue Citigroup for advising in favor the EMI deal. According to the Daily Telegraph, Hands “admitted in court that EMI was only worth half the £4.2m he paid for it. Citi owns £2.6bn of debt.”

This means that Citi will likely take over EMI, at least in the short run. As anyone who paid attention to the record industry’s decline that began in the mid-1990s—before Napster, et al., by the way—will tell you, having a bunch of accountants and bankers running a record company probably isn’t going to end happily.

BMG Rights Management and Warner Music Group (the latter of which has tried merging with EMI several times over the past few years) are supposedly circling the hulking shell of EMI, mostly in the interests of securing that still-not inconsiderable catalog. And so the downsizing of the major labels continues, from six in 1999 to three, whenever EMI is finally disposed of.

There may not be many tears shed when EMI finally gets eaten, especially given its miserable track record since this century began. But it will, symbolically at least, represent one more potential avenue for striving artists being shut down. When you look at it that way, EMI’s fate is a real shame.

“Hello EMI!” Rotten crowed at his song’s end. “Goodbye, A&M!” That they’d both be gone, for all intents and purposes, by 2010—while Rotten/John Lydon still on the road in various Pistols and Public Image Ltd. permutations—is something even Johnny could never have imagined.