The Decidedly Low-Key Careers of GLC and Consequence

Some take the Kanye path... some don't. 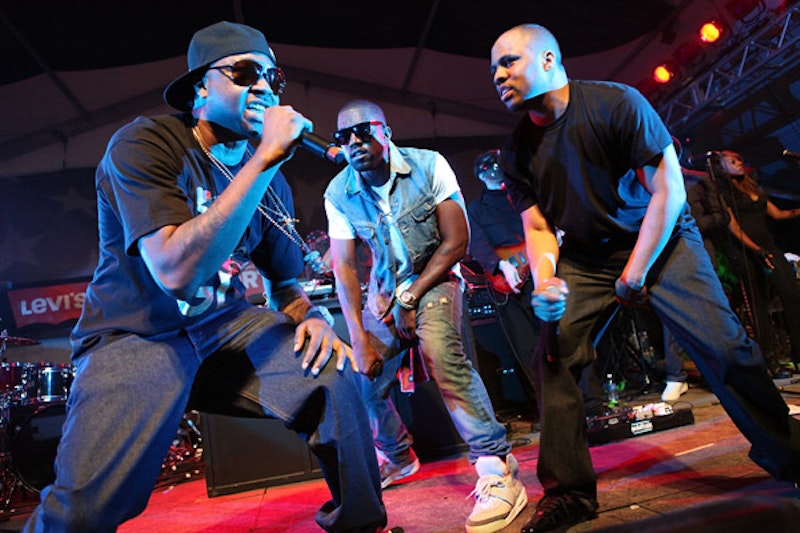 Along with fellow wizened, Kanye West crony Consequence, GLC expanded the middle-class travails of College Dropout, adding a more lived-in, less petulant point of view to work-a-day anthem “Spaceship.” Consequence rapped about going from guest-spots on Tribe Called Quest's Beats, Rhymes, and Life to working a day job, while GLC injected a knowing, street dude perspective into the decidedly suburban song, ending his verse with a regret-filled couplet: “Should've finished school like my niece / Then I wouldn't have to use my piece.”

As West's profile continued to rise, GLC and Consequence remained defiantly down-to-earth. Consequence's 2007 debut, Don't Quit Your Day Job! stretched “Spaceship”’s conceit over an entire album and that same year, GLC released “I Ain't Even On Yet” a song that cleverly ran through a list of luxuries his relative rap fame afforded him, punctuating the boasts with “and I ain't even on yet”—a half-modest reminder that he wasn't yet a superstar.

Now, nearly four years after “I Ain't Even On Yet” made its mixtape rounds, GLC's debut Love, Life, and Loyalty arrives. “I Ain't Even On Yet” is on the album and it's still a great song—the sentiment funny as ever, the beat, a spaced-out gorgeous thing—but it also highlights the problem with Love, Life, and Loyalty: This isn't so much an album as it is an egregiously dated, jerry-built collection of songs. “The Big Knot” swipes it's hook from Rich Boy's 2006 hit “Throw Some Ds” and features Bump J, a Chicago rapper of note...before he was arrested for bank robbery in 2008. Bun B—a major influence on GLC's conscious hustler persona—shows up on “Clockin' Lotsa Dollaz” but his verse sounds like it was recorded before Bun's UGK partner Pimp C died in 2007. T-Pain shows up on “Flight School” and well, rap moves really fast and no one's using T-Pain all that much anymore. Stirring album-closer “I Did It” is marred by a ridiculous sample of Eli Porter, the mentally impaired rapper who became an Internet meme a few years ago. See what I mean?

Through this mish-mash of aged-out tracks, GLC's special talent for rapping through trends still comes through. “Pour Another Drink” is a Timbaland rip-off featuring John Legend doing a Justin Timberlake impression, but it cleverly turns the celebratory drinking jam on its head. GLC lists his problems (“at thirteen man, I had to raise my sister's babies”), then asks for another drink on the hook, not to keep the party going, but to dull the pain. “So Real” keeps confessional chipmunk soul interesting. The party-metal tinged “This Is It,” actually works. Nevertheless, the strange desperation and pathetic dependence on obviously dated music makes Love, Life, and Loyalty a frustrating, distracting listen. This is unfortunate because there's actually a place in rap for a guy like GLC right now. He's very much in the vein of current underground favorites Freddie Gibbs or Pill—traditionalist hustler-types that have outgrown the life but knowingly articulate its appeal—and could easily construct an album as good as their recent work. He just needs to learn to drop that one song he did with T-Pain two years ago and move on.