Few movements in music have made the cultural impact of early lo-fi music by teenagers from the 1960s and 1970s. 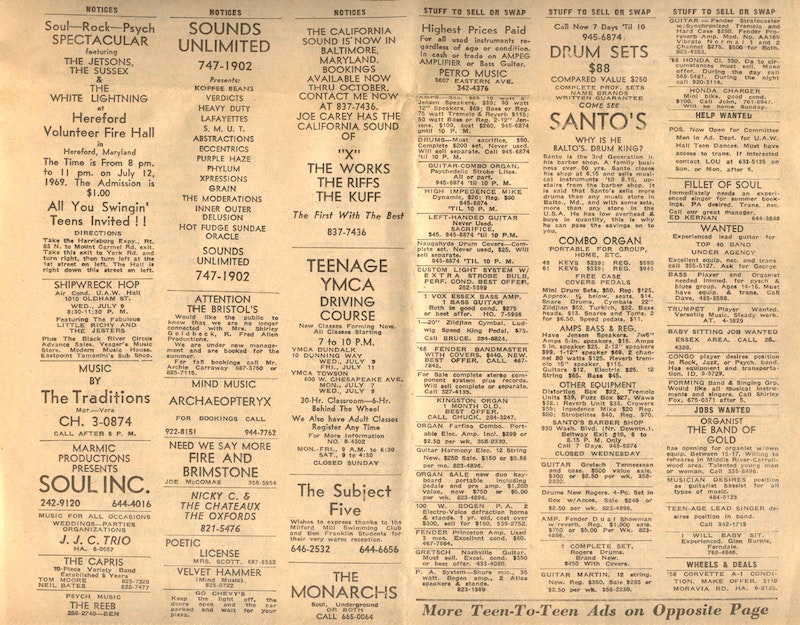 From the early-1960s to the mid-70s the prolific output of teenage American DIY artists was unprecedented. That the work from this period remained so fertile for so long seems miraculous. There are many reasons for this, but these recordings speak best for themselves. That’s a nice way of saying how much more time can be spent singing the praises of vintage DIY? Why even bother mentioning this music anymore?

Few other movements have made the cultural impact that came once the tsunami of early lo-fi genres engulfed the music industry. Contrary to popular belief, punk, death rock, avant garde funk, noise rock, bedroom pop, and grunge all emerged fully formed concurrently to 1960s garage rock and the British Invasion, more than a decade before the late-Cold War era arrival dates commonly attributed to these styles. This was a milieu untouched by the late-1970s culture war which pit “Underground Punk” against “The Mainstream,” a conflict that was marketing gold for greedy record companies and music promoters who relentlessly milked its diametrically opposed cash cows of rebellious iconography and faddish hedonism. Then came the rush of “emo,” “indie,” “alt-rock,” and nostalgia trends leeching off the legacy of every other punk and post-punk aesthetic imaginable.

Though many early DIY artists were obscure, they weren’t anti-capitalist. Often inspired by The Beatles’ breakout/stateside success, countless young musicians began self-releasing distorted records and self-promoting equally noise laden concerts that were more lucrative than their parents’ weekly 9-to-5 paychecks. The difference here is the lo-fi scene that came before the late-70s was fostered by a grass roots network of commercial/Top 40 AM radio stations, high schools and colleges, hyper-local media outlets, and other small businesses, not fringe reactionaries dedicated to the quasi-political goal of staying on the cutting edge indefinitely.

By no random coincidence the corporate media consolidation that gave birth to mega-entities like Ticket Master and monopolistic cable TV providers sprung up just as punk, arena rock, and disco first reached wider audiences. Before that time obscure artists were often obscure simply because they had no pressing need to get big. There was a strong demand for live bands that specialized in regional music. Without the pre-fab niche market tactics that defined consumer culture from the late-70s to early-2000s that demand thrived due to a common belief that music was an organic part of any given community’s unique identity.

This movement could be found anywhere that teenagers lived, but manifested itself in subtle varying ways before the densely populated American regions first took on megalopolitan characteristics. There was a much more noticeable diversity in US regional culture prior to the late-70s. It wasn’t just an over-hyped culture war that destroyed America’s early DIY scene. Unsurprisingly, it also dissolved just as environmentally negligent urban planning concepts began to accelerate the growth of cultural homogenization, yet another defining economic tool of the late-Cold War era.

Boasting a durable connection to artists who focus on hometown success, DIY has always been an easy fit for the mid-Atlantic U.S. This region’s adoption of the grass roots approach comes serendipitously arising from an unusual set of prevalent socio-economic circumstances. The people of this locale partially embraced the Confederacy during the U.S. Civil War while never suffering any of the economic setbacks that eventually plunged the post-antebellum South into a seemingly endless cycle of poverty. With this long-standing schizoid influence, DelMarVa’s early creative visionaries rarely had to make any effort at being original. Places like Maryland transform people into inventive weirdos whether they want to be weird or not.

There was the ultra-violent treble shredding aggression of Parkville, MD’s Bobby J. & The Generations, the Bo Diddley chaos of Bel-Air area bands like The Piece Kor and The Penn-Mar Stompers, the eerie sadness of the Maryland Line area’s Sites N Sounds and Hickory’s Souls Of Britton, DC’s psychedelic noise-funk gods The Young Senators, the jangly introspection of Parkville’s Fabulous Monarchs, Bel Air’s Sodom & Gomorrah, and Baltimore area crew The 24 Karat Five, and the angular no-wave predicting abstraction of those rambunctious “Rolling Stones Of Dundalk” The Rysing Suns. The Chesapeake Bay Watershed’s contribution to lo-fi music may only be a ripple in the waters of time, but that ripple created an explosive noise that’s never been forgotten by those who live for the youth quake blast in its wildest form.