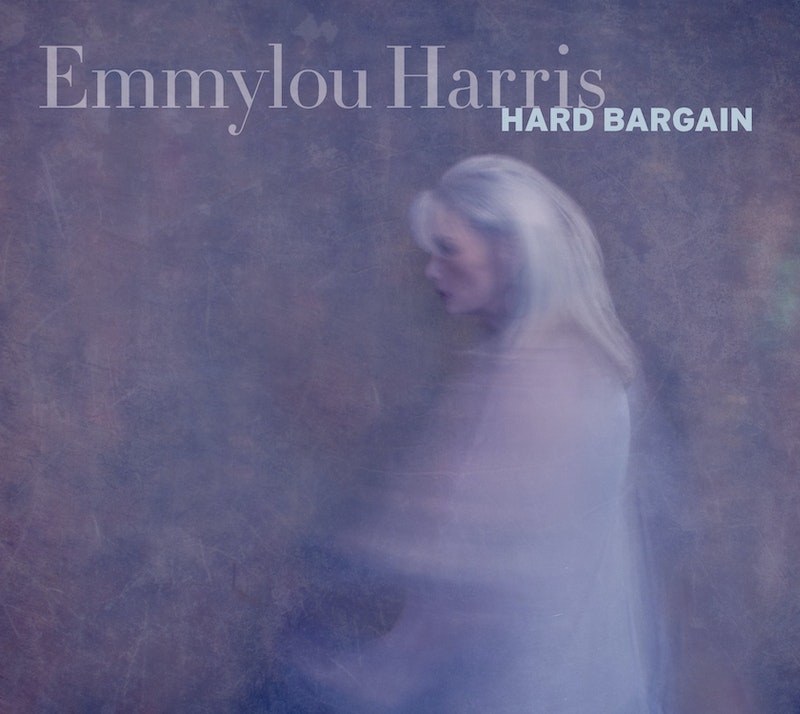 “To Ohio” is easily the best song on Emmylou Harris’s new album, Hard Bargain. A collaboration with indie folkies the Low Anthem, the tune sways along in a dreamy wash of mandolin and acoustic strumming, that distinctive catch in Emmylou’s voice contrasting achingly with Ben Knox Miller’s laid-back speech-singing. The track has the sublime hippie grace of prime Emmylou, while also sounding absolutely up-to-the-minute. In her 60s, the singer, at least for one song, manages to remain relevant without losing her soul.

Harris has consistently been most herself when she’s collaborating. Her career was kicked off by Gram Parsons, who provided her early on with the hippie/folk/country fusion that would define her career, as well as with a wiggy duet partner for her pristine harmonizing.

The first song on the album, “The Road,” is a tribute to Parsons—and it nicely encapsulates why she needed Parsons in the first place. Over sweeping folk accompaniment and plodding drums, Harris earnestly breathes out lyrics like, “How could I see a future then / when you would not grow old / with such a fire in our bellies / and such a hunger in our souls.” Later in the song she comes down from the mountain and goes walking in his shoes. That’s a string of clichés worthy of REO Speedwagon.

Harris doesn’t always write crappy lyrics. “Big Black Dog” on Hard Bargain, for example, an ode to Harris’ dog rescue volunteerism, is light and sweet, its occasional detours into bathos saved by the music’s jaunty loping. And Harris’ original 1975 tribute to Parsons, “Boulder to Birmingham,” is a heartbreaker, mixing religious imagery, everyday details and plain statements of grief. “I would rock my soul in the bosom of Abraham … I would walk all the way from Boulder to Birmingham / If I thought I could see, I could see your face.” Cliché free.

Still, the fact that Harris wrote a great song doesn’t really change the fact that three decades later she’s written a crappy song about the exact same thing. And much of the rest of the album is plagued with similar problems. Whether she’s insisting in “Lonely Girl” that she’s a lonely girl in a lonely world, or talking about how she wants to go to “Home Sweet Home,” her observations drift ineluctably into easy, poorly articulated sentimentality. Worst of all is “My Name is Emmett Till,” a maudlin ode to racial equality that would have been forgivable if Joan Baez had sung it a generation ago. Now it just seems like a series of easy platitudes, not so much engaging with the struggle as capitalizing on nostalgia for it. The anonymous atmospherically sincere folk backing doesn’t help much either. Listening to this, it’s hard to shake the impression that left to her own devices, Harris doesn’t have a whole lot to say.

Emmylou’s career has never been about her own vision, of course—or at least not about her own isolated vision. After Parsons died, Harris didn’t turn herself into a singer-songwriter. Instead, she became one of country’s canniest cover artists and collaborators, working with Linda Ronstadt, Bob Dylan and the Band, and singing songs by everyone from Dolly Parton to Donna Summer. She also found and nurtured a series of rising stars, from Rodney Crowell (who penned many of her best early songs); to Ricky Skaggs (who contributed mightily to perhaps her best album, Roses in the Snow); to Vince Gill; to Paul Kennerly (who married her and wrote some of the best songs on one of her last great albums, 1990’s Brand New Dance.)

All of Harris’ collaborations weren’t necessarily ideal—I’m pretty torn on the New Agey, Daniel Lanois-produced Wrecking Ball, and what I’ve heard of her recent collaboration with Mark Knopfler hasn’t exactly made me leap to my computer to download the album. But there’s no doubt that she has, throughout her career, done her best work when seeking out musicians who challenge her.

What’s most frustrating about “To Ohio” is that it points to an Emmylou Harris album that could have been. The indie folk scene over the last 10 years has been one of the most creative branches of rock music. Who better than ur-hippie-country-guru Harris to give it a twang and maybe—who knows?—even get it some country radio play? Why not an album of covers by Fleet Foxes, Iron and Wine, Sufjan Stevens, Joanna Newsome, The Horse’s Ha, Devendra Banhardt, or even Antony and the Johnsons? Why not get Daniel Smith to produce a record for her? Surely that would be more in keeping with Parsons’ vision of Cosmic American Music than writing yet another maudlin, musically vacuous tribute to the man himself. It’s been a while since Harris made a great album, but I firmly believe she still has it in her. Or, more accurately, outside her, where her strength has always been.