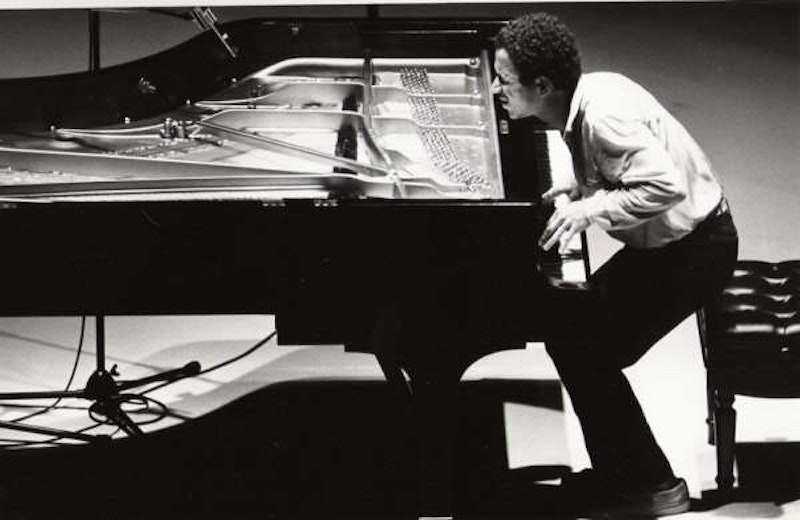 Keith Jarrett closes his eyes and starts playing the piano. More than an hour later he opens his eyes; I imagine a salty bead of sweat on the C# key. There is an audience in front of him. Stunned, they clap. The claps grow into a collective sound like a sigh heard from far away. What happens in between may be described as "free improvisation," "Jazz fusion," or "neo-classical"; and while these genres serve to clarify or describe the music, you'll just have to hear it.

I became obsessed with Jarrett, in particular, La Scala (1997), recorded live at the Teatro alla Scala in Milano, Italy on February 13, 1995. At 78:37 minutes, it is simply divided into two parts.

At first, he listlessly fingers around the piano as a melody takes form, though each note is barely found before it's played. Jarrett here presents a narrative of notes from which the entire internal logic of the piece comes. Imagine Bill Evans on Ambien, the elegant notes so soft, almost bent. You amble along with him, curious where this is going. The high notes fall, the low notes rise. You feel calm.

This goes on and on, until the key changes to minor, the playfulness more ominous, an occasional erratic or atonal note piercing the comfort. He wheezes the melody with his throat as it's being invented before us, mimicked by actual ones, a nanosecond behind. Then, a rhythm begins under chords, droned together with the sustain pedal. The grunting starts. In an endearingly unprofessional way, he goes arggghh with the struggle for the perfect note. When he finds it, Woo! you hear, a sort of real time auto-critique of the song, and it's funny—a master pianist wooing his own song; but these are not affectations.

I'd fall asleep to the album almost every night for a year, during a rather lonely time in my life. It's an awful word to use, but La Scala is very "dreamy," which fit my dozing in-and-out of consciousness quite well. I was there sitting next to him on the bench, my tired head on the piano, in the fashion of a half-deaf Beethoven who wanted to hear the notes better. It felt good being next to him, our eyes closed, his fingers as a light rain in a brain forest of no worry. When the audience erupts in applause at the end, I'm always a little disappointed. He wasn't playing just for me.