Recession Can't Hold Us Down

Social crises might make for better hip-hop, but let's not forget the rhymes from better times. 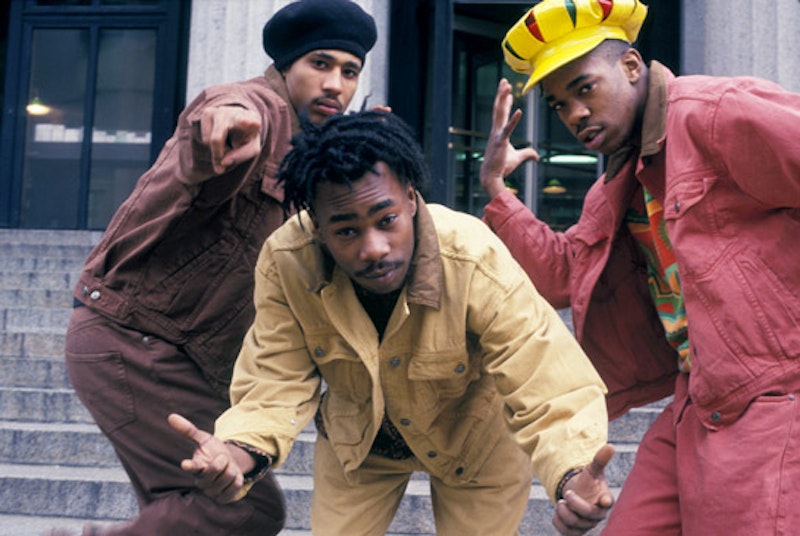 Leaders of the New School. You may recognize the guy on the right.

I Went for Mine

Luchini AKA This is It

Case of the PTA

Just how bad is this recession? So bad that it has infiltrated the hip-hop scene. In less than two months the trend in hip-hop has shifted from celebrating Barack Obama’s election to surviving the recession. Everyone from Cam’ron, to N.E.R.D, to Young HOV himself (Note the stacks of Euros in this video!) are fronting a more sober tone and demeanor.

In 2003, the Roots’ drummer ?uestlove made the argument that sputtering American economies have, in the past, lead to golden eras in hip-hop and black art. “My theory is that nine times out of ten, if there’s a depression, more a social depression than anything, it brings out the best art in black people. The best example is, Reagan and Bush gave us the best years of hip-hop. I think had Carter and then Mondale won, or if Jesse [Jackson] were President from ’84 to ’88, hip-hop wouldn’t have been the same. Hip-hop wouldn’t have existed.” There’s no arguing with the quality of work that was born in the 80s, and this recession’s rap has its charm, but I’d much rather prefer to think of other, better times when the economy was on the up and up, hip-hop was as strong as ever, and springtime was ushered in with charcoal and a boombox. Here are some premium cuts to remind us of the economically prosperous 1990s.

Diamond D and the Psychotic Neurotics, “I Went For Mine”
From Stunts, Blunts, & Hip Hop (1992)

The Bronx legend Diamond D is first and foremost a producer. He has production credits alongside The Pharcyde, The Fugees, and A Tribe Called Quest, which should give you an immediate understanding of what kind of pedigree we’re talking about here. In 1992 he released his debut album to an unsuspecting public that, while familiar with his fresh and delectably, jazzy beats, had not heard him on the mic. Diamond turned out to be a natural with a steady flow and an impressive lyrical prowess. This entire album is excellent, and any of the 23 tracks would be a decent introduction to Diamond D, but I’ve decided to go with a song that has a good cruising rhythm and a buoyant, entrepreneurial spirit to it. Remember when we all thought positively about that capitalist, go-get-it mentality?

Main Source is another crucial player in early 1990s hip-hop. The group consisted of K-Cut, Mikey D, Sir Scratch, and Large Professor. When the group released Breaking Atoms in 1991, many critics described it as a landmark album for its colorful, uptempo rapping, choice sampling, and overall formidable production. “Large Professor” demonstrates all of these traits and even pays homage in name to its creator. On a side note, the track “Live at the Barbeque” on Breaking Atoms is the first song to feature Nas.

KMD, which stands for “Kausing Much Damage”, recorded two albums in the 90s—Mr. Hood and the cult classic Black Bastards. Among the four members, the group included a young MF DOOM, known at the time as Zev Love X, and his younger brother. Black Bastards was set for release in 1994 but because of its cover art the album was shelved until 2001. Zev’s younger brother DJ Subroc was tragically hit by a car while the group was putting the final touches on Black Bastards. Subsequently, Zev left the music scene for about four years before reemerging as MF DOOM.

Camp Lo, “Luchini AKA This Is It”
From Uptown Saturday Night (1997)

Uptown baby! Uptown Saturday Night is probably one of the tightest albums I’ve ever heard. With songs like “Black Connection,” “Coolie High,” and the brilliant “Luchini AKA This Is It” which features production wizardry from David Willis, Will-Ski, this album continues to amass a cult following. Take it from Wale, this album is the illest.

Leaders of the New School are known for spawning the career of a young Busta Rhymes. “Case of the P.T.A.” is a friendly, Jazzy Jeff era jam that features some excellent production from Cut Monitor Milo. Busta absolutely kills it on his verse and the schoolyard vibe on this certainly recalls better days when we could fret over teachers and grades instead of tuition and the financial apocalypse.