Puppies in the Sun Make Cosmic Ambient Noise for Everyone

Their new album Light Became Light is far out and accessible. 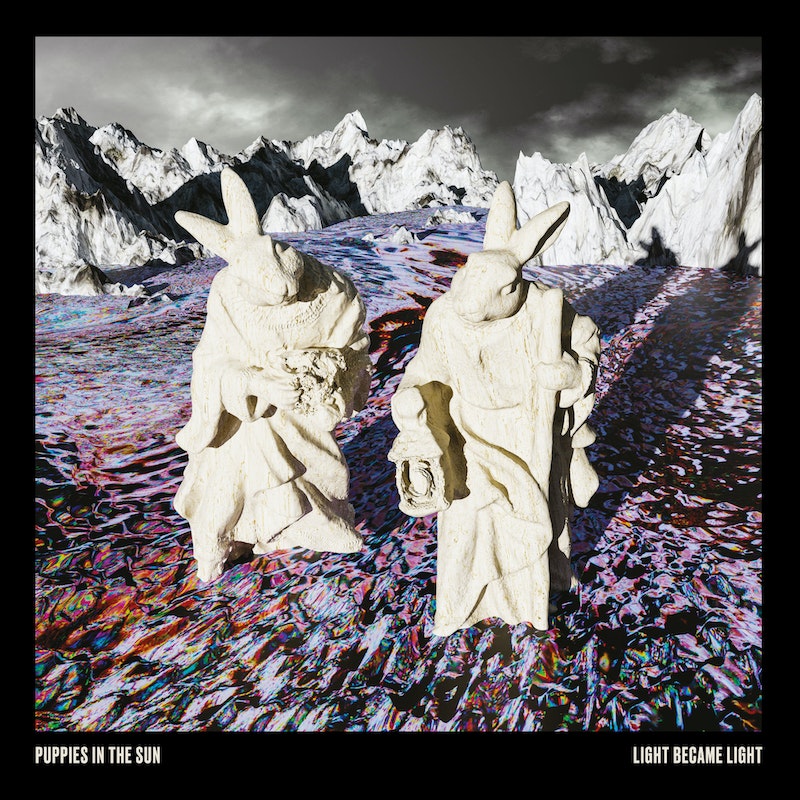 The opening of “Futuro,” the first track on Puppies in the Sun’s debut buh records album Light Become Light, is a huge, synth-heavy march. It sounds like a fanfare for the world exploding. It’s distinctive and unique but also familiar.

I spent days in an irritating name-that-tune spiral before I figured out where I’d heard it before. It’s an odd, anti-pop double of mostly (and unjustly) forgotten R&B singer Shareefa’s 2005 debut single “Need a Boss.” Ludacris has a great guest verse within the enormous, echoing Darkchild production.

So was an experimental noise duo directly inspired by Ludacris declaring “Grown women be feeling me/and they ain’t got nothing to lose but their virginity” some 17 years back? Anything’s possible, but I’d doubt it. The sonic echo isn’t evidence of direct influence. But it is a reminder of how electronic global music, popular and otherwise, has converged over the last couple of decades.

Puppies in the Sun consists of Alberto Cendra on synthesizers and Cristóbal Pereira on drums. They’re both from Peru, where they were childhood friends. They met up again by accident in Barcelona, and now are based in Rotterdam. Light Become Light was recorded in Madrid.

The short track “What Galaxies Will You Be Staring At” leans all the way into the galactic nebula before falling overboard in delightful slow motion. There’s a meandering piano under the synth washes and cymbal rolls, while someone gives the English recitation, “What galaxies will you be staring at… I am alone now, and I don’t know my way home.” “Hanging Heavens” and “Star, The Time Has Come, You Are Ready” are longer journeys into ambient pulse and sweaty tripped-out vision quest.

Other tracks steer out of the stars and onto the dance floor. “Raging, They Came To Dance” is basically what the title says; the beat settles into the thump-thump-thump of techno throb, while the synths blare like sirens. “A Very Short Trip Around a Supervoid” is more laid back, somewhere between drifting towards the sun and dancing in the sunless small hours. You could see it being played in a club, though the bodies stacked close would all be swaying rather than thrashing.

“Light Became Light” is the most abrasive track. The drums at the beginning clatter and scrape, and the electronic strobe effect from the synths borders on the feedback of power electronics. “The day the prophets were born, light became light” a voice mutters. It still sounds like you’ve taken off from earth, but this time it feels like that might be because the earth blew up.

Even here, though, the links to radio and pop aren’t hard to hear; the opening drum figure is reminiscent of Dave Grohl’s intro on Nirvana’s “Scentless Apprentice.” Puppies in the Sun isn’t going to be the next Kurt Cobain or Darkchild, and Cendra and Pereira might not appreciate the comparison to more commercial acts. But in a lot of ways who gets to be the more commercial act has more to do with marketing and position within the industry than the sound coming through your headphones and/or over your speakers and/or from the cosmic motion of the spheres. Light Became Light is otherworldly in a pleasingly familiar way. The music that greets you at the outer edge of experience will take you apart.