The Baltimore electro god is nearly stampeded by his own frenzied crowd at a show. 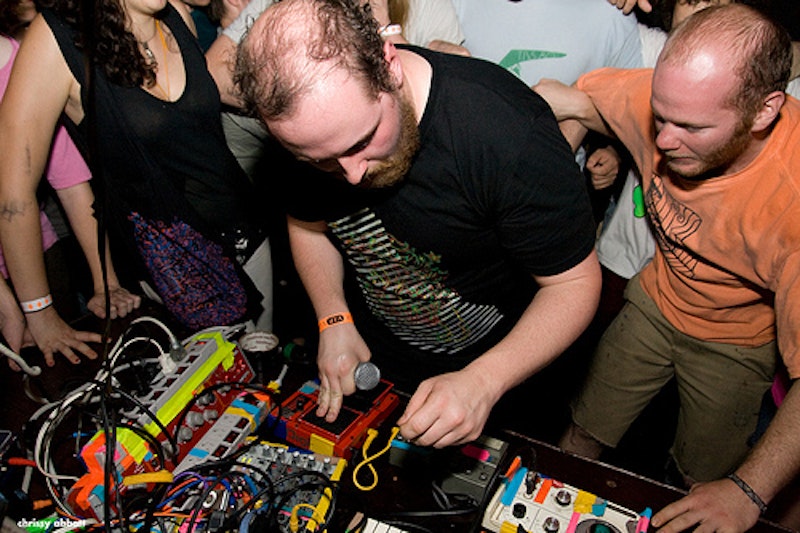 Photo by Chrissy Abbott for bmoremusic

Last Saturday night, I went to Baltimore’s Sonar to check out Taxlo’s beginning of summer blowout, with a lineup that looked more like a mini-Whartscape—art collective Wham City’s annual four day music festival—than a dance party, although the atmosphere of the night was certainly more club or party-centric. The show was divided across two rooms, with Awesome Color, DAT Politics, Black Dice, and Dan Deacon in the main venue, where I stayed for the entire evening. This arrangement effectively boosted the capacity of the club by about 400, so the main room never really felt as full as it should until Deacon’s set.

Awesome Color was up first. These dudes (and a girl) looked like they just came straight from the Ocean City boardwalk. The guitarist/singer had a glorious beer gut and wore a stained t-shirt with some crusty plaid shorts. Margaritaville didn’t go so well for this guy…he could’ve easily been the father of half the kids at the Sonar. The bassist looked like a punk Sideshow Bob, and the drummer was androgynous enough that nobody believed me when I said she was a girl after their set. Their music was very loud, simple, back-to-basics garage rock with little going for it other than volume. The mix wasn’t so hot either; the vocals got drowned out by the ear-piercingly-loud guitar. Imagine The Stooges but without Iggy Pop and more repetitive, longer songs. That's a bit too harsh, but the whole garage revival thing has been done, and besides, it’s just not my thing.

Next was French dance band DAT Politics, who got pretty annoying after a while. I’m not an expert on dance/house subgenres, but I can tell you the bass was loud and hard and there were no live instruments. A girl sang in French while two guys behind laptops and MIDI controllers bobbed their heads in sync. They played for a long time but pretty soon I couldn’t distinguish one song from another. I can see the appeal of stuff like this, but I just wasn’t feeling it, and it seemed pretty superficial. I probably would’ve enjoyed DAT Politics a lot more if I were on ecstasy. Or French.

Black Dice…fuck. Are these guys human? I’ve been a Black Dice fan for years now, but this was the first time I’ve seen them live. Everyone says they’re one of the loudest bands on the planet, but you don’t really know what that means until you see them. My ears were still ringing three days after the concert. They played for about an hour, with no breaks. This was not good for my aural health. That said, I thoroughly enjoyed their set, and not just because it was really, really loud. I saw Eric Copeland, one of the band’s members, play a solo show at a loft space back in April, and afterwards, a friend of mine thought of a great way to describe his and his band's music: “an alien perspective on humanity.”

The song structures and sounds Black Dice use are weird, but the songs contain enough pop strains that they sound even more fucked up and strange than, say, Wolf Eyes or Throbbing Gristle. It’s kind of like the Uncanny Valley of sound: songs like “Kokomo” or “Lazy TV” sound almost normal enough to be dance songs, but the rhythms are off just enough and the samples are manipulated in a certain way that the result is instinctually jarring. If you murdered “Looking for the Perfect Beat,” “Nite Crème” would be the corpse. As you can imagine, this isn’t the most accessible stuff, so I wasn’t surprised when I turned around at the end of their set and saw that the main room had lost about half the crowd. Whatever, their loss. Black Dice will rule the world one day.

Finally, Dan Deacon was ready to go around 12:30. I’ve seen him five times, and this was by far the worst. Deacon had just ended a long European and American tour with his ensemble, a group of friends and like-minded musicians whom he got to help him play the songs from his new (and best) album Bromst. The ensemble’s big, but was unfortunately unavailable for the Sonar gig, so Deacon was forced to go back to his roots and play by himself, with just a table of equipment and manually operated lights, on the floor of the venue, right up against the barricade.

This setup worked a lot better when he was significantly less well known, because let's be honest, it’s pretty ramshackle and unreliable. Any and all of his things could get screwed up beyond repair every night, whether by spilled drinks, too much sweat, or someone just breaking it. He started the set off with “The Crystal Cat,” which he has played at every show of his I’ve seen, so that one’s getting a little old. Not even halfway through the song, shit got nasty. I was at the very front, up against his table, and we were getting crushed. People were pushing so hard I had to support myself on the barricade, lest I fall and get trampled by the horde.

Deacon cut the song and implored the audience to “use this as an opportunity to realize that it would be more fun to dance than to push me as hard as you possibly fucking can.” He wasn’t happy, and it wasn’t getting any better. This made the mood and atmosphere really uncomfortable and tension-filled, and by the time he finished off the song, people were just as close and pushing just as hard. After the second song, “Red F,” Deacon was so fed up that he played a loud, harsh square wave uninterrupted for two minutes, just to spite the audience. He said, “You know, this is the city that I live in, and it really doesn’t feel like it right now.” Eventually he got some of his Wham City comrades to step in and create a human barrier against the crowd just so he could function.

The rest of the set was musically pretty unremarkable; it was obvious this was his first solo show in months. The material he played was underworked, underdeveloped and repetitive. Honestly, I wouldn’t be surprised if it was another move to piss off the audience. Once that was over, it was time for “Baltihorse,” a number he introduced with a choice jab: “This song’s called ‘Baltihorse,’ I should’ve called it ‘Cincinnatihorse.’” I left around the middle of that song; the angry atmosphere was just too much. It was a real bummer to see Deacon like that, though. I’d imagine coming home after months of touring and being treated like shit must feel pretty bad. If I were Dan Deacon, I'd stick to the stage from now on.