A trip through the Australian outback reminds one writer that her father can't understand pop lyrics. 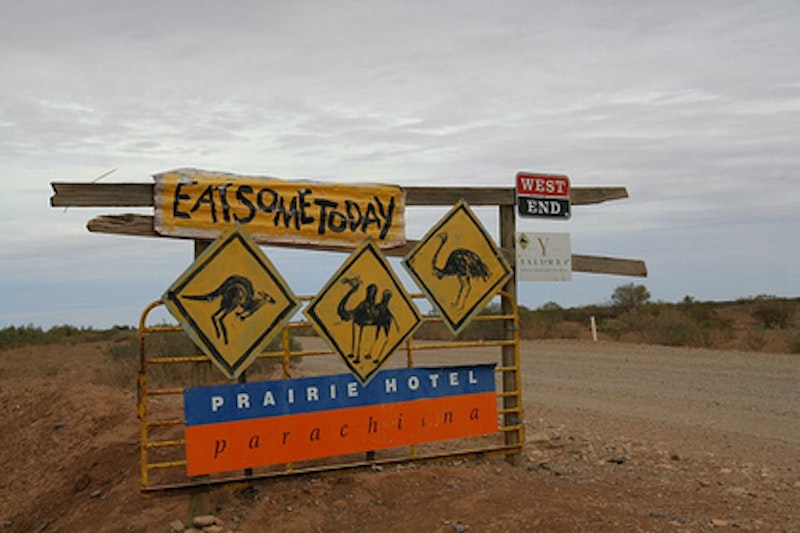 As you move inland from Australia's coastline, you find yourself in the bush, which, unlike the desert it surrounds, gets enough rain to sustain a mind-boggling variety of life. Here, you find hundreds of hectares of eucalyptic forest, and literally thousands of species of wildlife. This is where you find the kangaroos, the koalas and the little-known but truly adorable wombats. This is the real Australia. This is where Sydney-siders go when they “go bush.”

Last weekend, my father and I went bush, driving about 250km northwest of Sydney to spend a weekend drinking good wine, eating good food, and watching kangaroos graze at dusk. The drive took about four hours, and to pass the time, I made a couple of mix CDs. About halfway through the drive, as I sang along to John Mayer and Marvin Gaye, my father turned to me and said, "This is great music, but I have no idea what they're saying."

My father has always been bad at understanding song lyrics. When I was performing in musicals, I would buy him the Broadway cast recording of the show months before opening night so that by the time he watched me perform the songs, he had some idea of what I was singing about. My sister also struggles to understand song lyrics, but her solution is simply to make up her own lyrics and belt them out over the song. Perhaps because Dad was raised in the 1950s by European parents who taught him to listen to classical music, he simply never got accustomed to deciphering the lyrics of pop songs. Or perhaps, as I suggest whenever I tease him about getting old, he's just going deaf.

We drove further west and the CD ran its course. As Natasha Bedingfield and Taylor Swift—yeah, yeah, I know, I have terrible taste in music—did their thing, I listened more carefully than usual to the lyrics, gaining a new appreciation for them in the knowledge that the man next to me couldn't understand them. What a shame it would be to not be able to feel inspired by the sugary, yet irresistible lyrics of Natasha Bedingfield's “Unwritten,” to not: "Feel the rain on your skin," even though, “No one else can feel it for you/Only you can let it in.” What a pity that my Dad misses out on the angry teen-girl vengeance in Taylor Swift's good, old-fashioned “my man done cheated on me” country song, “Should've Said No.”

OK, so maybe he's blessed to have missed out on those two particular songs. But outside our car, where he was the captive audience to my collection of truly appalling pop music, he was missing out on more poetic lyrics, some of which were written during his youth. Simon and Garfunkel, Bob Dylan and Joni Mitchell all penned exquisite and moving lyrics, and if he could understand them, my Dad would probably enjoy them very much. Yes, it is great music, but wouldn't it be even better if he had some idea what they were saying?

I’m just thankful for all the singer-songwriters and lyricists who have written truly inspired, and inspiring, songs. For me they range from Cole Porter and Stephen Sondheim to Ani DiFranco and Ben Lee, but we should be thankful for artists who write lyrics so good that daughters around the world are inspired to press pause, and explain to their fathers what the hell is going on.